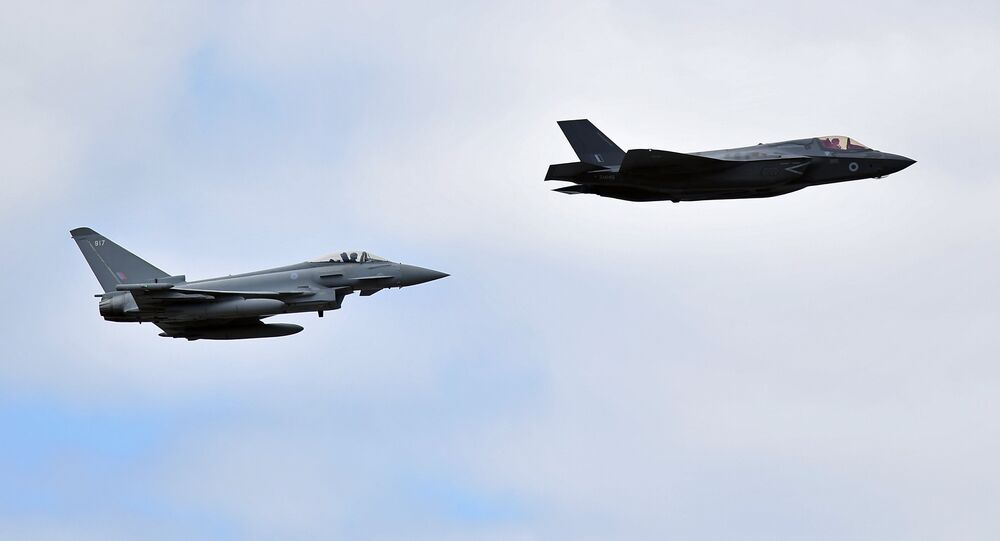 The UK announced that the first of its F-35B STOVL fifth-generation fighter aircraft had become 'combat ready' earlier this year amid Defence Secretary Gavin Williamson's fears of a "resurgent Russian threat."

The Royal Navy plans to deploy its brand new F-35B fighter jets in Cyprus this summer, with the planes set to fly from their home base at RAF Marham in Norfolk to the RAF Akrotiri airbase in Cyprus, the Ministry of Defence has announced.

🛫 We have lift off! The UK’s most advanced jets deploy overseas for the first time 🇬🇧 🇨🇾 https://t.co/oMXYjPKldR pic.twitter.com/D5TCqp5wi6

According to the MoD, the deployment will give the Royal Navy and the RAF "vital experience in maintaining and flying the aircraft in an unfamiliar environment."

Defence Secretary Gavin Williamson praised the planned deployment on Twitter, boasting that it would serve as a "statement of our intent to protect ourselves and our allies from threats across the world."

Our F-35B Lightning aircraft are to deploy to #Cyprus. These jets are a statement of our intent to protect ourselves and our #allies from threats across the world. This deployment marks an important milestone in this game-changing aircraft’s journey to becoming fully operational. https://t.co/fd4SCUlFrw

The personnel from Lightning Force, the RAF entity responsible for operating the new planes, is expected to spend two months training in the eastern Mediterranean ahead of further training aboard the HMS Queen Elizabeth aircraft carrier in the fall, with training including logistical support and maintenance, as well as some possible live firing.

"The first overseas deployment of these world-beating British F-35B aircraft to RAF Akrotiri, together with their embarkation in HMS Queen Elizabeth for the first time in the autumn of this year, are important milestones to prove their readiness for deployed operations anywhere in the world in defence of our national interests," First Sea Lord Admiral Sir Philip Jones said.

US Air Force, Airman 1st Class Isaac Johnson
British Navy and Air Force Face Off in Dispute Over New F-35 Jets – Reports
According to Sky News, it's possible that the F-35s will be used for 'strike missions' against the remnants of Daesh (ISIS)* in Iraq or Syria, although US President Donald Trump declared victory over the terror group last month after Syrian Kurdish forces took its final Syrian stronghold.

Britain currently has 17 F-35 B aircraft at its disposal, with plans to procure a total of 138 of the $115.5 million apiece planes over the F-35 program's lifespan.

The F-35 program is the most expensive defence program in history, with a projected total cost of $1.5 trillion over its 55 year lifespan. In addition to cost, the plane has been criticised for a plethora of bugs and problems which continue to plague the aircraft, over four years after its introduction into service with several branches of the US military. Acting US Defence Secretary Patrick Shanahan has described the plane as "f***ed up," and said that Boeing would have done a much better job if the defence contract had gone to them. Last month, a key US watchdog complained that the US Navy's F-35s were nowhere near operational status, saying the plane was "not ready to face current or future threats" and could put US military personnel's lives at risk.