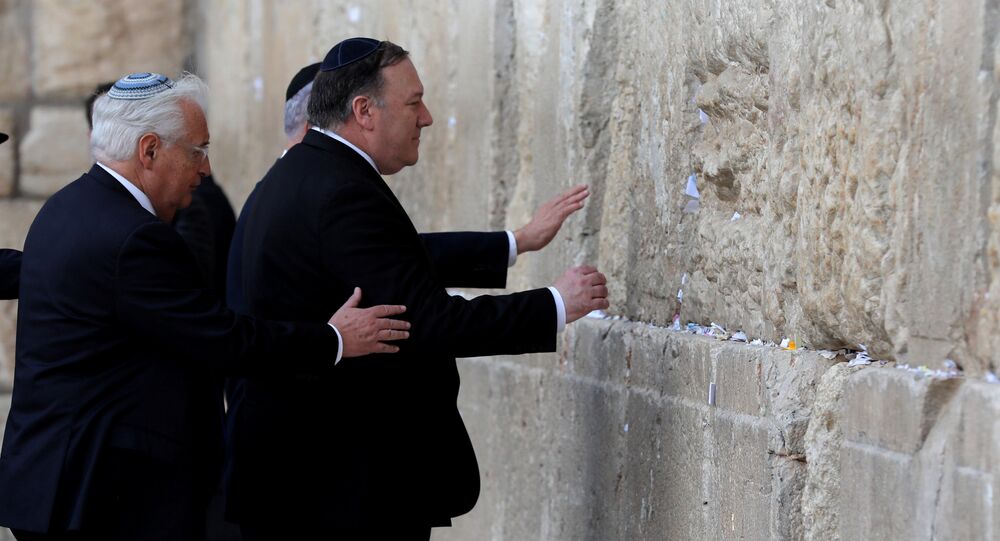 ‘The Lord Is at Work’: How Top US Diplomat’s Religion Shapes US Foreign Policy

In using his own version of Christianity to create US foreign policy, Secretary of State Mike Pompeo has raised fears on Capitol Hill as to the influence of evangelical beliefs on the administration of a nuclear superpower.

© AP Photo / Oded Balilty
Lavrov Blasts Trump's Recognition of Israel's Sovereignty Over Golan Heights
"I am confident that the lord is at work here," stated Pompeo, regarding the history of Judaism, during an interview with the Christian Broadcasting Network earlier in March, even as the influence of evangelism in the American government has been seen to be on the rise, according to a report in The New York Times.

Pompeo's beliefs, similar to those of US Vice President Mike Pence and former President George HW Bush, make no apology for using a Christian belief system to justify foreign policy moves — often within the same sentence — indicating the extent that an evangelical approach to American diplomacy could lead to war with other nations whose populations adhere to different faiths.

While Pompeo's boss, US President Donald Trump, is considered a secular public figure, white evangelical Christians make up a well-documented and vocal segment of the polarizing American leader's voter base and the top US diplomat is not shy about broadcasting his own version of those beliefs.

© Sputnik / Наталья Селиверстова
Tehran Slams Pompeo for Distorting Torah Holy Text 'to Serve Iranophobia'
Evangelical beliefs include Israel as a harbinger of so-called end times, when the Christian god ‘returns' to Earth to judge humanity. Christian evangelicals in many instances celebrate the idea of an oncoming apocalypse, as it means that those who follow their rules get to go to their heaven.

"We will continue to fight these battles," Pompeo notably declared during a 2015 ‘God and Country Rally,' particularly as a "never-ending struggle" will conclude with "the rapture," cited by Nytimes.com.

More recently, Pompeo — a former director of the CIA — stated that the Christian bible "informs everything I do," cited by The New York Times Magazine.

During a widely-televised speech in Muslim-majority Cairo, Egypt, in January, Pompeo openly highlighted the importance of his religious belief system by stating: "In my office, I keep a Bible open on my desk to remind me of God and his word, and the truth," cited by State.gov.

© AFP 2021 / Ahmad GHARABLI
GOP Candidate Suggested Israelis, Palestinians Need to Convert to Christianity to Reach Peace
A former Boy Scout, Pompeo has used his position to huddle with faith-based newsgroups while excluding journalists with mainstream media organizations, particularly on March 19 as he was just about to depart for Lebanon, Kuwait and Israel.

The state department refused to release the names of the groups allowed to attend or a transcript of the content of that recent get-together, according to CNN.

Pompeo and Vice-President Pence in 2018 spearheaded a well-publicized political and diplomatic campaign to convince Turkish President Recep Tayyip Erdogan to allow an American evangelical priest named Andrew Brunson to be allowed to return to the US.

Brunson had been arrested in 2016 and charged with supporting the banned Kurdistan Workers' Party (PKK), being an American spy and plotting to overthrow the Turkish government while helping to plan the failed 2016 coup, among other accusations.

A Trump pick for the position of top US diplomat, Pompeo has documented ties to hate groups and those with a strident anti-muslim agenda, including far-right US pundits Brigitte Gabriel and conspiracy theorist Frank Gaffney, according to Vox.com.

Pompeo Looking for Cause to Start War Against Caracas - Venezuelan Minister