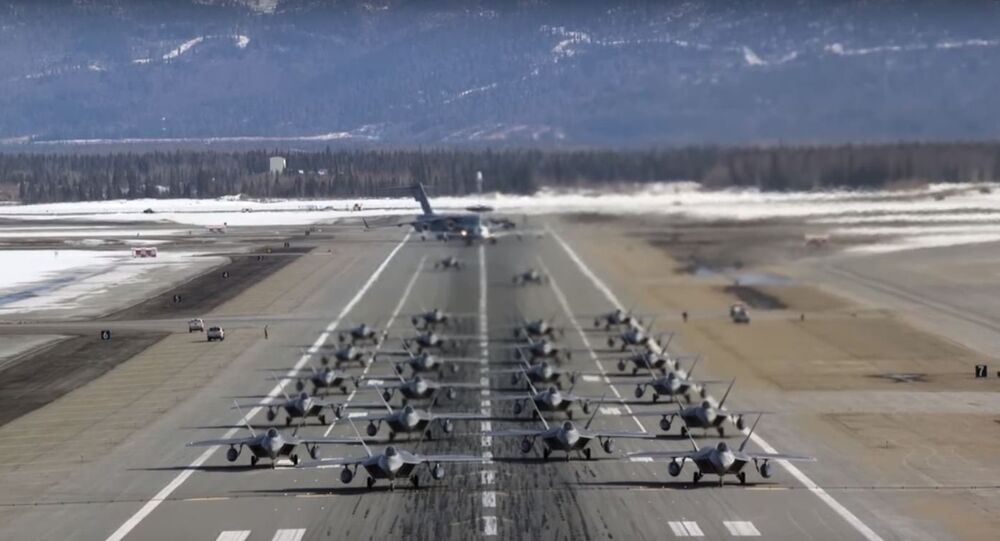 A US Air Force squadron in Alaska performed an “elephant walk” of 24 F-22 Raptor stealth fighters, a C-17 Globemaster III transport plane and an E-3 Sentry command and control surveillance craft March 26 as part of what the service called a routine demonstration of its ready power.

The elephant walk — in which aircraft taxi in close formation down a runway before taking off, one by one — took place at Alaska's Joint Base Elmendorf-Richardson during the two-week Polar Force exercise underway there. Popular Science speculates that this was likely the greatest number of F-22s ever to launch at once. (An elephant walk of 24 F-22s was held last month in Virginia, but was broken up into two waves.)

Polar Force, which this year will wrap up April 5, "gives [the base's] squadrons an opportunity to demonstrate their abilities to forward deploy and deliver overwhelming combat airpower," a Facebook post by the Air Force's 3rd Operations Group notes.

As the US reorients its defense posture away from counter-terrorism and toward "near-peer" threats from Russia and China, the possibility of northern conflict has reemerged. Air Force Gen. Terrence O'Shaughnessy told senators in February that, "[China and Russia] both have… established a noticeably stronger foothold in the Arctic along the northern approaches to the United States and Canada. As a result, the strategic value of the Arctic as our first line of defense has re-emerged, and [US Northern Command] and NORAD are taking active measures to ensure our ability to detect, detract and defeat potential threats in this region."

Earlier this month, the head of US European Command assured US lawmakers that the US was sending "a signal that the Arctic is important to us" through some of its military deployment changes.

From Alaska to Outer Space: Key Takeaways of New US Missile Defence Review