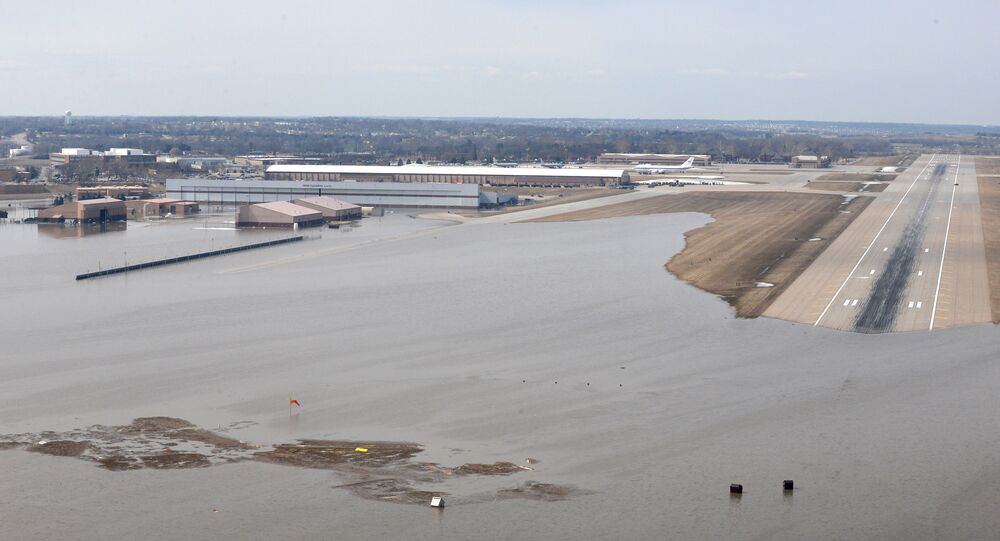 'Afraid of Getting Your Wheels Wet?' US Doomsday Plane Redeployed Due to Flood

The Boeing E-4B Nightwatch is always supposed to be prepared to host the strategic command in the event of a nuclear war breaking out, but it was unavailable for some time due to an unexpected redeployment.

The Boeing E-4B National Airborne Operations Centre, which belongs to the US Global Strike Command, as well as eight RC-135 Rivet Joint reconnaissance jets, were forced to abandon the Offutt Air Force Base in Nebraska after one third of it was seized by an "opponent" the military didn't expect — the Missouri River.

Due to heavy snowfall this winter, the subsequent ice melt and a significant drop in air pressure, the river flooded vast areas, inundating the south-eastern side of the base, including part of the runway. Several planes, including the E-4B were able to avoid being trapped at the base by using a narrow window of opportunity before the forces of nature were able to overrun even more.

Currently the "doomsday plane", which is intended to house the command of the armed forces in case of a nuclear war, is stationed elsewhere, although the military hasn't specified the precise location. They expect that in a few weeks they will be able to assess the damage at the base, but are predicting that it will take a long time before it becomes fully operational again.

READ MORE: Is It Today? US Doomsday Plane Takes Off Amid Tensions in Syria

This is not the first time that a natural disaster has wreaked havoc on a US military base. In October 2018, hurricane Michael caused "catastrophic" damage to the Tyndall Air Force Base in Florida, rendering it non-operational for a lengthy period.