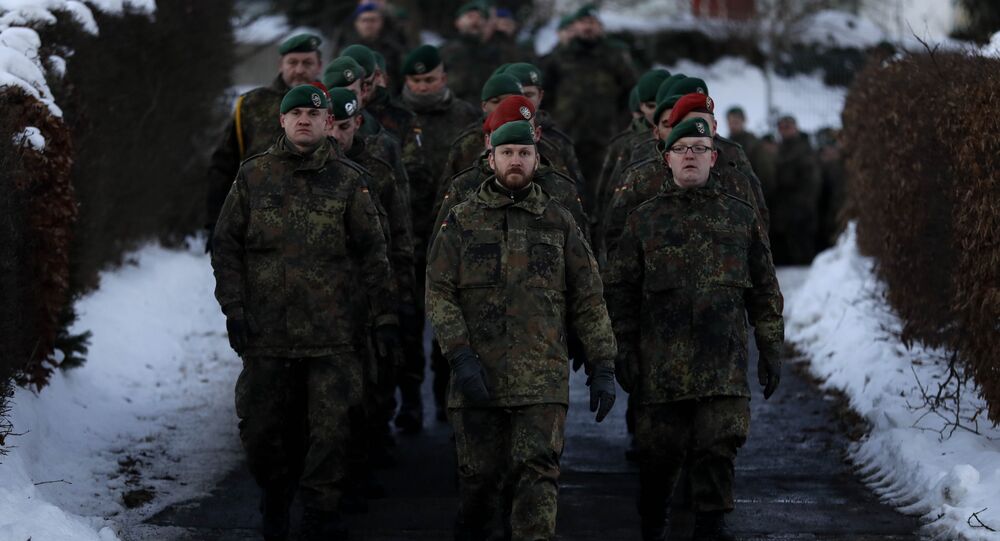 Berlin’s failure to meet the alliance’s agreement to spend 2% of GDP on defence has been a source of tension between Germany and the US. Angela Merkel earlier pledged to boost military spending up to 1.5 percent of GDP by 2024. But the budget plan, introduced in Berlin, suggests that the expenditures will be decreasing after a rise next year.

German Finance Minister Olaf Scholz has presented the country’s budget plan for the next several years allocating an extra $2.4 billion for military spending in 2020. This means the share of defence expenditures will increase to 1.37 percent of GDP and closer to NATO’s 2 percent target. However, after what the ministry described as a "notable increase," the expenditure share will be rolling back to 1.25 percent of GDP, or $50.2 billion by 2023.

The Ministry of Finance has justified its budget planning due to the worsening economic prospects, the German outlet Spiegel reports. Apart from military spending, the ministry is also planning to gradually cut its spending on development aid from $11.6 billion in 2020 to $10.8 billion in 2023.

This draft bill, which is due to be adopted by the government on 20 March, goes against German Chancellor Angela Merkel's earlier pledge to increase German defence spending to 1.5 percent by 2024. The issue of meeting the alliance’s spending arrangement remains a stumbling block between Merkel’s Christian Democratic Union/Christian Social Union and its coalition partner, the Social Democrats, as well as a major irritant in ties between the US and the European powerhouse.

The news has prompted US Ambassador Richard Grenell to lambast Germany's financial planning, steering Berlin away from reaching the NATO quota. He pointed out that NATO member states have clearly agreed to move to the 2 percent target by 2024 and not away from it.

“The fact that the German government is considering even reducing its already unacceptable contributions to military readiness is a disturbing signal from Germany to its 28 NATO allies”, he said as cited by the German news agency DPA.

Both US President Donald Trump and NATO chief Jens Stoltenberg have called on allies in the bloc to raise their defence spending, following an agreement between member states in 2014 to spend two percent of GDP on their militaries. Although Germany has been raising its military expenditures, up from $45 billion to $50 billion in 2018, it still does not meet NATO's target, prompting repeated complaints from Donald Trump.

Trump pointed out that only a few of the 29 member states were spending two percent of their GDP on defence and insisted that the other members of the alliance should pay their "fair share".

Moreover, the US president has even questioned the Cold War-era bloc's relevance, calling it "obsolete" and "unfair" to Washington. While the US spent nearly $700 billion on military expenditures in 2018, all its European NATO allies combined allocated just $280 billion.

Journalist on Germany: 'There Is a Very Little Trend to Join Military Services'