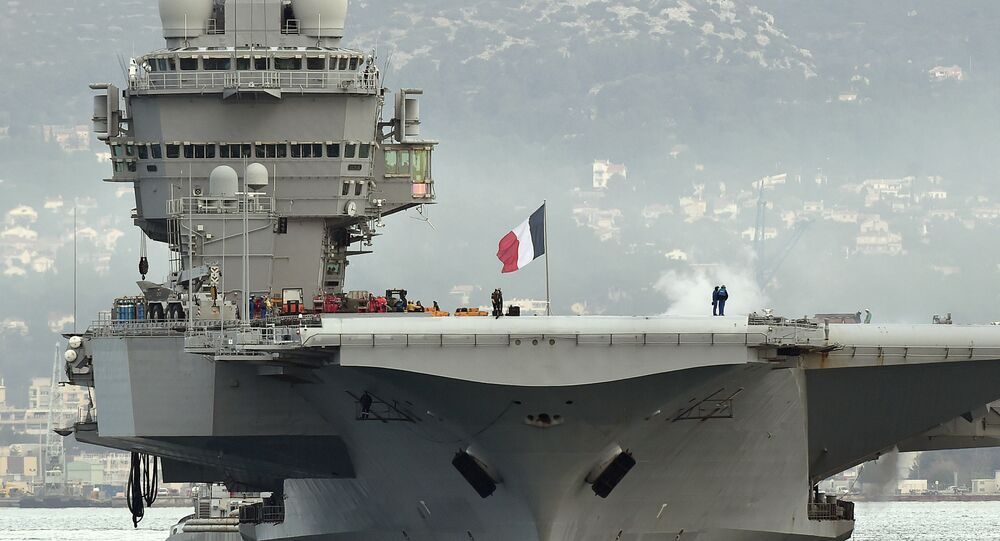 WASHINGTON (Sputnik) - The French Navy’s aircraft carrier Charles-de-Gaulle and its strike group have joined the operations of the US-led coalition against the Daesh terror group, the US Central Command said in a statement.

The carrier strike group consists of the Aircraft carrier Charles-de-Gaulle, the Danish frigate Daniel Juel, and an attack submarine among other assets, according to the statement.

"The Charles-de-Gaulle launched Rafale Marine and Hawkeye aircraft to support coalition troops on the ground and gather intelligence while other air assets and vessels were conducting air and maritime control operations", the statement added.

© Sputnik / HİKMET DURGUN
Daesh Surrounded by SDF in Baghuz, Urges Supporters All Over World to Stage Attacks in Its Defence - Reports
The French air carrier group has already conducted three previous missions since January 2015 in support of the US-led coalition.

French President Emmanuel Macron has said that France would follow the United States in withdrawing forces from Syria after Islamists are defeated. However, Macron has stressed that Paris needs to "fix" the situation on the ground to help Syrians create an inclusive society and prevent other terrorist groups from thriving on frustrations of the people.

Last year, the Lebanese Al-Manar TV network reported that the US military established a new base in the Syrian province of Hasakah, and France sent military convoys to the base. According to the media report, several US military columns, including armored vehicles arrived in Hasakah and later proceeded to Shadadi, while military vehicles allegedly under French flag followed into the area in northwestern Hasakah.

However, the coalition’s spokesperson has declined to comment on the matter, citing "operational security reasons".

The US-led coalition of more than 70 members has been conducting military operations against the Daesh terrorist group in Syria and Iraq since September 2014. The coalition’s activities in Syria are authorized neither by the Syrian government, nor by the UN Security Council.