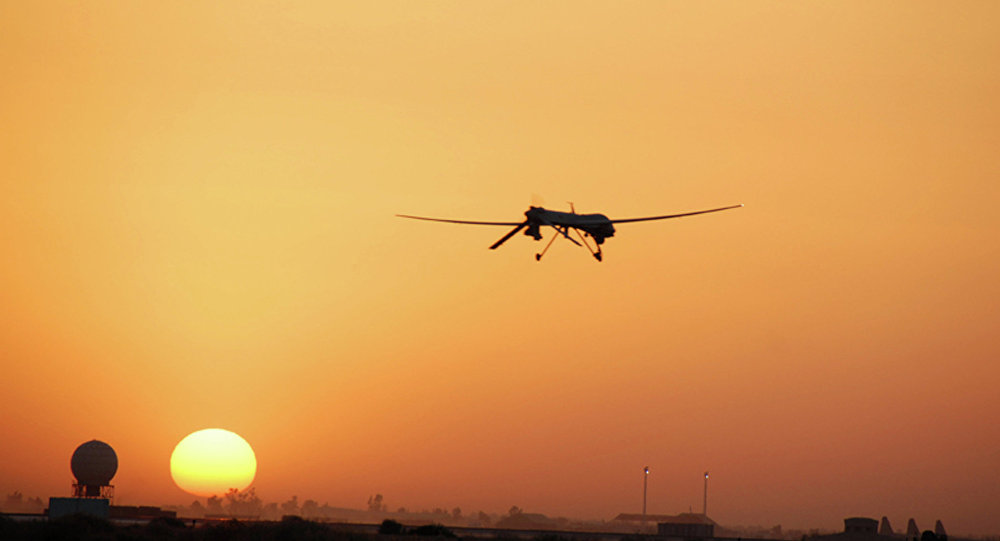 The drones started at different military bases as far as 1,000 kilometers from the target and bombed it simultaneously.

The drill involved a fleet of 50 drones modeled after the US' RQ-170 Sentinel, one of which was captured by Iran in 2011, as well as a number of other UAVs, which were launched from bases as far as 1,000 kilometers away from the target located at Bani Farur island in the Persian Gulf. It was the largest Iranian military exercise of this kind to date, the IRGC said in a statement.

All drones involved in the drill successfully bombed the designated target at the same time, Mehr News reports.

​"For the first time, 50 Iranian drones on the RQ-170 [US Sentinel] model operated with a number of assault and combat drones," Iran's Fars News reported.

Golam Ali Rashid, IRGC Ground Force commander, said that despite US claims about Iran "failing" 40 years after the Islamic Revolution, "today we are witnessing the strongest maneuvers of the IRGC's Aerospace Forces," a Jerusalem Post report says.

During its drills called “Towards Jerusalem 1” over southern territorial waters of Persian Gulf, #IRGC has flown 50 reverse-engineered #RQ170 drones and a number of combat UAVs. #Iran (I@ages Via @FarsNews_Agency & @Mahdiibakhtiari) pic.twitter.com/ktck63J67V

​The Jerusalem Post also noted that the drill involved drones that looked like US Predator MQ-1s, adding that Iran has also developed the Shahed 129, first flown in 2012, which is, in fact, a copy of the Predator.

The drill comes in the wake of a large Iranian naval drill which took place earlier in February, as well as a series of ballistic missiles tests, the Jerusalem Post says. In December, the IRGC Ground Force also launched massive military drills in the south of Iran, according to Mehr News.