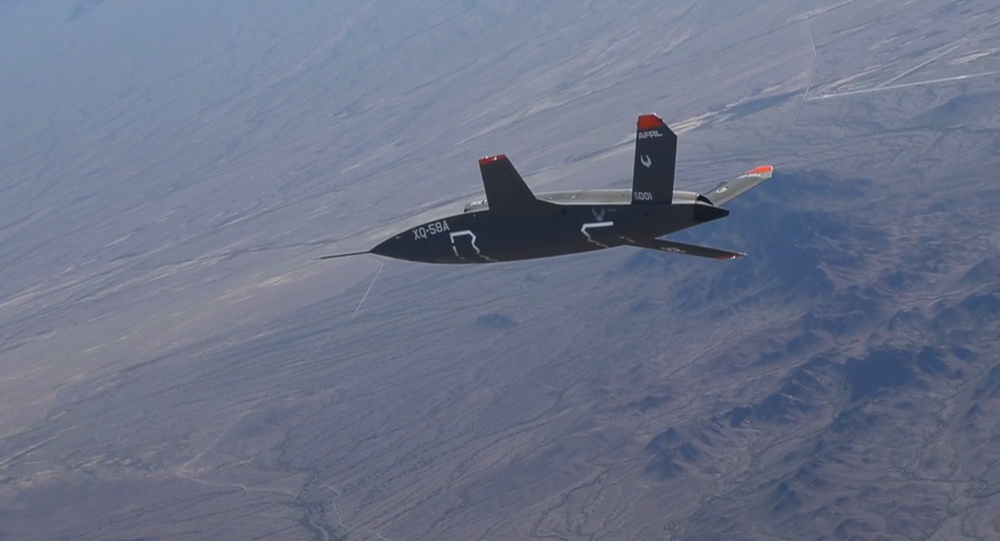 If approved for US Air Force use, the new unmanned air vehicle, dubbed the XQ-58A Valkyrie, is expected to serve as an inexpensive surveillance, electronic warfare and attack drone, with an additional capability of being able to act in concert with a manned combat aircraft known as the 'loyal wingman' concept.

The US Air Force Research Lab has released a video of the first flight of the new aircraft during testing after keeping the Valkyrie under tight wraps for over two years.

The drone, developed by Kratos Defence, a California-based defence firm, is said to have spent some 76 minutes in flight, with another four test flights planned to scrutinise system functionality, aerodynamic performance, and its launch and recovery systems, according to The Drive.

The drone has a presumed range of over 2,000 miles (over 3,200 km) and can be armed with precision-guided bombs or electronic warfare and surveillance equipment. Importantly, the Valkyrie can be launched using rocket boosters, meaning that, unlike many existing US drone programmes, it will not require a runway to take off.

In a statement, Air Force Research Lab programme manager Doug Szczublewski boasted that the XQ-58A was "the first example of a class of UAF that is defined by low procurement and operating costs while providing game changing combat capability."

© AP Photo / Kirsty Wigglesworth
US Suspected of Deploying Avenger Drones to Syria for Mystery Missions
Kratos hopes to sell its new drone to the air force for $3 million apiece if it orders up to 99 units, or $2 million each for orders above 100 units a year.

The United States military has engaged in a drone warfare program in multiple countries since the mid-2000s, launching attacks in Pakistan, Yemen, Somalia, and Afghanistan. In addition to use by the military, drones have been used by several government agencies, including the CIA, for covert missions. Much of the US's existing drone infrastructure is based in Germany, with activists and lawmakers in that country repeatedly protesting the drone program's presence and calling it "illegal."

Earlier this week, the US Air Force reported that a detachment of MQ-9 Reaper drones had become operational at an air base in Poland.

Also this week, US President Donald Trump revoked an Obama-era executive order requiring the administration to publicly report on the number of civilians killed in US strikes outside of war zones. Late last year, a UK nonprofit calculated that Trump had carried out 238 drone strikes in Yemen, Pakistan and Somalia since coming into office, quickly gaining on President Obama's record of 563 strikes between 2009 and 2017.