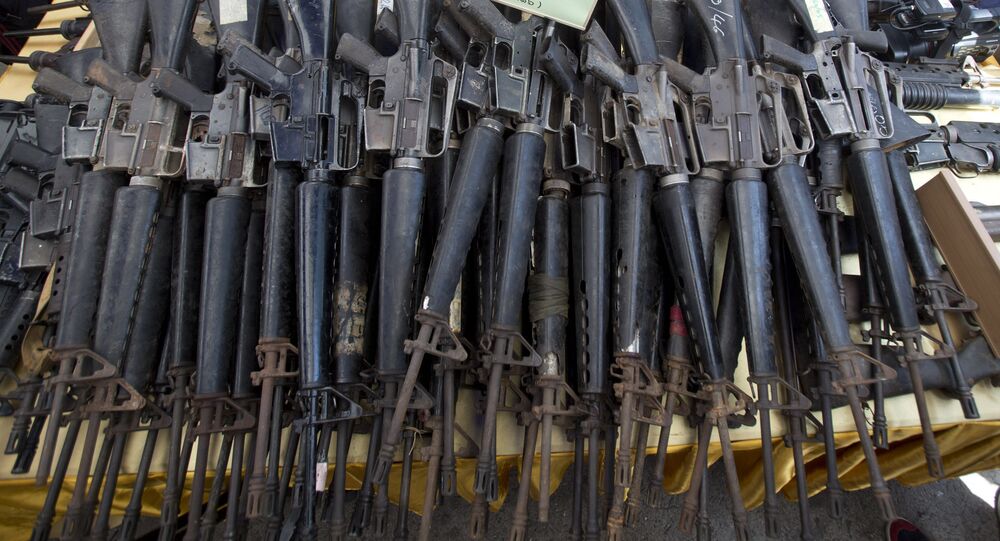 They also asked Brazil, Colombia, Peru and other countries for guns, claiming soldiers in Venezuela are ready for an all-out revolt. The latter statement, however, remains up for debate.

Venezuelan Army defectors who have fled the country have turned to the US administration, asking for weapons to use against Venezuelan President Nicolas Maduro, a CNN report says.

Two former soldiers, Carlos Guillen Martinez and Josue Hidalgo Azuaje, both whom live beyond Venezuela's borders, told CNN in an interview that they want the US to arm defectors inside the country to fight Maduro in favor of self-appointed Interim President Juan Guaido.

The defectors also seized the opportunity to call on their former compatriots to rebel against Maduro.

"As Venezuelan soldiers, we are making a request to the US to support us, in logistical terms, with communication, with weapons, so we can realize Venezuelan freedom," Martinez told CNN.

© CC0
Venezuela Must Send Its Gold to Friendly Nations Like Turkey and Russia – Turkish Politician
"We're not saying that we need only US support, but also Brazil, Colombia, Peru, all brother countries that are against this dictatorship," Azuaje added.

The US has recognized Guaido as Venezuela's interim president, and US National Security Advisor John Bolton called on the Venezuelan military to "accept the peaceful, democratic and constitutional transfer of power," AFP reported Tuesday.

It remains unclear how Washington would sell arming the rebels as "peaceful and constitutional," should they choose to answer the exiled defectors' call.

Guaido's supporters who live abroad have said Venezuelan military largely supports Guaido, adding that the army is one with the people and that the military should not intervene in the protests and clashes in Caracas.

However, the top brass in Venezuela remains fiercely loyal to Maduro, CNN reports, with their declarations of loyalty being aired on national TV throughout the day. Recently, Minister of Defense Vladimir Padrino Lopez stated he was ready to die for the current government. Shortly after the US' recognition of Guaido, Lopez tweeted that the army would not accept an "imposed president."

© AP Photo / William Fernando Martinez
No Talks on Sending 5,000 Troops to Colombia Amid Venezuela Crisis - US Secretary of Defence
A full-scale US military intervention in Venezuela still remains an option, AFP reported Tuesday.

"The president has made it clear on this matter that all options are on the table," Bolton said Monday.

However, even the defectors say they don't want this to happen.

"We do not want a foreign government [to] invade our country," Azuaje told CNN. "If we need an incursion, it has to be by Venezuelan soldiers who really want to free Venezuela."

On Monday, the US imposed economic sanctions on Venezuela's state-owned PDVSA oil firm, in order to prevent Maduro from using the oil revenues to finance the military.

"The path to sanctions relief for PDVSA is through the expeditious transfer of control to the interim president or a subsequent, democratically elected government," US Treasury Secretary Steven Mnuchin said Monday.

© AP Photo / Michael Probst
Cryptocurrency, Economy Experts Support Maduro in Clash With Bank of England
Maduro condemned the sanctions and accused the US of leading an "economic war," according to the Daily Express.

He also addressed US President Donald Trump directly, saying that any violence that happens in Venezuela will be "his responsibility."

"Trump, you are responsible for any violence that may occur in Venezuela, it is your responsibility… The blood that can spill in Venezuela is on your hands, President Donald Trump," Maduro stated Tuesday.

On Sunday, Bolton threatened that any violence or intimidation against Guaido will be met with "significant response."

"Any violence and intimidation against US diplomatic personnel, Venezuela's democratic leader, Juan Guiado, or the National Assembly itself would represent a grave assault on the rule of law and will be met with a significant response," he tweeted.