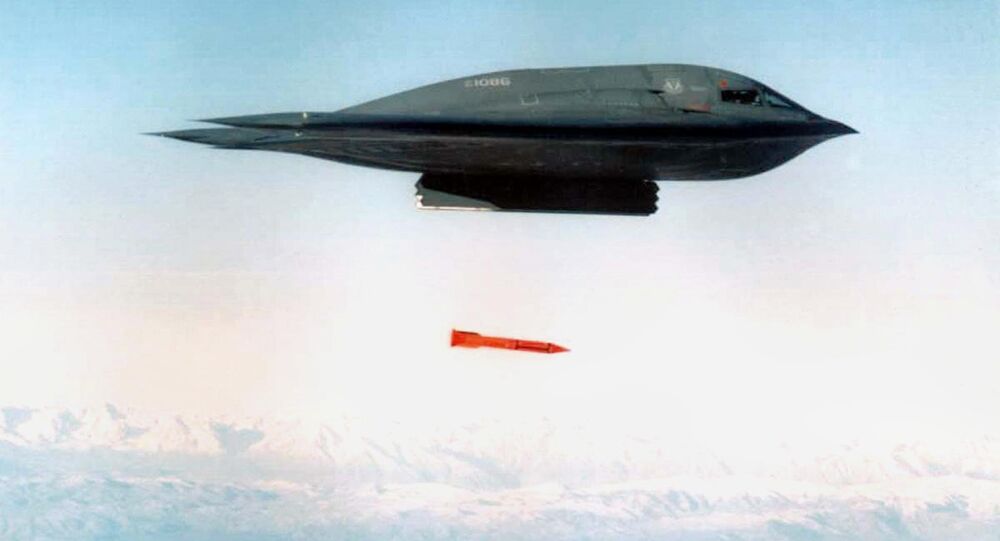 The Congressional Budget Office has released an updated estimate on the cost of modernizing the US nuclear force, calculating that about $494 billion, or $94 billion more than previously estimated, will be required over the next decade.

Government accountants blamed the rising costs of nuclear rearmament on inflation, along with additional weapons and command-and-control systems requested by the Pentagon. Additionally, the Trump administration has paid special focus to the creation of new short, tactical range nuclear weapons, earmarking $15 billion for the endeavor.

Speaking to Sputnik, Boris Rozhin, a military observer specializing in advanced weaponry and the global strategic balance, said that plans to expand the US nuclear arsenal are an excellent way to ignite a global arms race.

"As we can see from the US position on the Intermediate-Range Nuclear Forces Treaty, its program to expand missile defense, and talk about abandoning New START, the United States has taken a steady course toward unleashing an arms race. This has been facilitated by defense lobbyists interested in obtaining government contracts for the production and modernization of armaments, and by that part of the US establishment which depends on an enduring strategic confrontation with Russia and China," Rozhin said.

© Sputnik / Aleksei Vitvitsky
Moscow Once Again Urges US to Abandon Plans to Resurrect 'Star Wars' Program
This explains the $494 billion figure, along with the steady growth of the broader defense budget, the military observer noted.

"The White House will approve it, using the abstract motive of US national security, even though it is US policy that's pushing the situation toward the unleashing of a nuclear and missile arms race," he warned.

The US has justified spending to upgrade its nuclear deterrent on Russian moves in this area, with the Nuclear Posture Review singling out Moscow's efforts on strategic weapons as justification to increase the number of low-yield nuclear weapons in the US arsenal, and the creation of a new sea-based nuclear-capable cruise missile.

Pentagon officials have highlighted that while Russia is estimated to have about 2,000 tactical nuclear rounds in its arsenal, the US had just several hundred, mostly stationed at bases in Europe. Greg Weaver, deputy director for strategic stability with the Joint Chiefs of Staff, has insisted on redressing the "imbalance" of non-strategic nuclear weapons.

However, according to Maj. Gen (ret.) Pavel Zolotarev, director of the Military-Political Studies program at the Moscow-based Institute of the US & Canada, Weaver's logic is deeply flawed, given simple geographical realities.

"I do not rule out that Russia may surpass the United States in tactical munitions. But this disproportion is the result of objective circumstances. Russia needs tactical nuclear weapons for defensive purposes" in its home region. "The US is on the other side of the ocean. It makes no sense for the Americans to increase their tactical arsenals in the interests of ensuring their own security," Zolotarev said.

© AP Photo / Phil Sandlin
US Completes 20-Year-Long Naval Nuclear Warhead Overhaul
For his part, military analyst Yuri Knutov, director of the Air Defense Forces Museum outside Moscow, said the US was actually understating their tactical nuclear capabilities. "For some reason, the Americans don't like to remind anyone that they have artillery shells which can fire nuclear warheads. Furthermore, the French and British tactical arsenals are essentially subordinated to them. If we add up the stocks of tactical nuclear weapons among NATO countries, there's no imbalance to speak of," Knutov stressed.

Ultimately, the analyst suggested that the US has realized that Russia's hypersonic weapons have rendered the Pentagon's concept of a Prompt Global Strike defunct, and are betting on re-upping their arsenals of medium and short range missiles, including low-yield nukes.

"By all appearances, the Americans are hoping that they will be able to check Russia with the help of tactical nukes, which aren't regulated by international law. However, Trump's cowboy approach may lead to unpredictable consequences, especially for Europe, and increases the risk of a nuclear exchange," Knutov concluded.