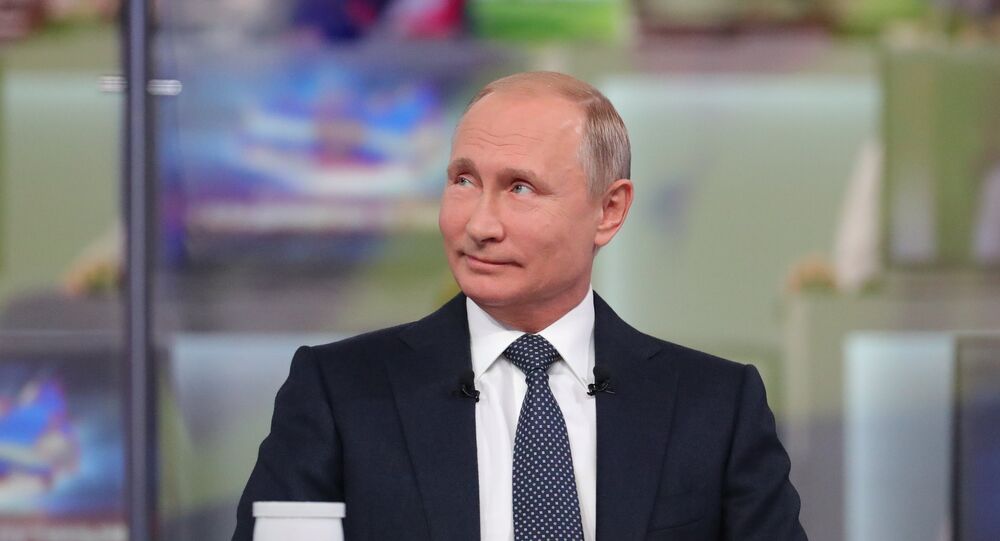 NATO has significantly expanded its military presence along Russia's western borders in recent years, while accusing Moscow of posing a threat to the military bloc.

Retired US Army Iraq War commander and Obama-era CIA director David Petraeus has voiced his support for the ongoing US and NATO military buildup in Eastern Europe, saying the Russian leadership has given the alliance a "new reason for living" since the end of the Cold War.

"Let's keep in mind, if you will, that Vladimir Putin is the greatest gift to NATO since the end of the Cold War. [He] has provided a new reason for living, if you will, for NATO. And indeed the US is continuing to be the backbone, in many respects, of the force, not just there but in other places around the world", Petraeus said, speaking at the Raisina Dialogue conference in New Delhi on Wednesday.

© AP Photo / Mindaugas Kulbis
NATO Troops in Estonia Supplied With Korean War-Era Headwear, Fear Cold Injuries Over Undersupply - Reports
Petraeus praised President Trump for continuing the Obama administration's plans for a NATO military buildup in Eastern Europe, including "plans for troops in the Baltic states, aircraft in Eastern Europe, an armoured brigade of the United States' return to the European continent for the first time in a number of years…new NATO command structures being approved."

At the same time, while agreeing with the panel's assessment of Russia as a "geopolitical disruptor," Petraeus argued that "the rise of China" has been the far bigger "disruptor" to the established world order in recent years. "Whether China has wanted to be a disruptor or not, its sheer rise, economically, militarily, diplomatically, the Belt and Road initiative, all of these different issues together I think have been the greatest in terms of disruption", he said.

© Corporal-chef Sedeyn Ritchie, Belgian combat camera team
Belgian Defence Chief 'Absolutely' Agrees Russia Bigger Threat Than Terrorism
According to the former CIA chief, a "bipartisan resolve" has been reached in the US regarding China "in terms of trade, in terms of IP theft, in terms of activity in the South and East China Seas, with respect to North Korea, etc, etc. that everyone has finally concluded that something must be done about this".

The US-China confrontation is the "defining issue of our age", in Petraeus's view, and other countries, including India, will have to "decide whether they're going to be inside, behind the great firewall of China and in that supply chain or in another one."

Emphasising that he remains a "globalist" and that he wasn't "rooting for a cold war", Petraeus said that it wouldn't be "misplaced to describe what is emerging as again somewhat of a new cold war…between again the two great powers, by the way with a resurgent Russia, all of which comprises this trend that is identified I think quite forthrightly in the US national security strategy and national defence strategy, which is described as a resurgence of great power rivalries, which is what of course all of this is about".

Petraeus, a retired US Army four star general, spearheaded the US military campaigns in the wars in Iraq and Afghanistan under President Bush before being appointed as CIA director by President Obama. He was forced to retire from the CIA after it was revealed that he leaked classified information to his mistress. He later plead guilty to a misdemeanour over the leaks, which whistleblower Edward Snowden characterised as being far more serious than his own.

© Sputnik / Игорь Самойлов
Twitter Cracks Up as NATO Accuses Russia of 'Military Build-Up' on Alliance's Borders
NATO has engaged in a buildup in the Baltic states, Poland, Romania and Bulgaria since the Western-supported coup in Kiev in 2014, which sparked a civil war in eastern Ukraine which the alliance blamed on Russia.

NATO began expanding into Eastern Europe and the Baltics in the late 1990s, despite verbal guarantees to former Soviet leader Mikhail Gorbachev that it would not  expand beyond the borders of the former East Germany after Germany's unification in 1990. Since 1999, the alliance has incorporated every former member of the defunct Soviet-led Warsaw Pact in Eastern Europe, spread into the Baltic republics, and swallowed up several republics of the former Yugoslavia.