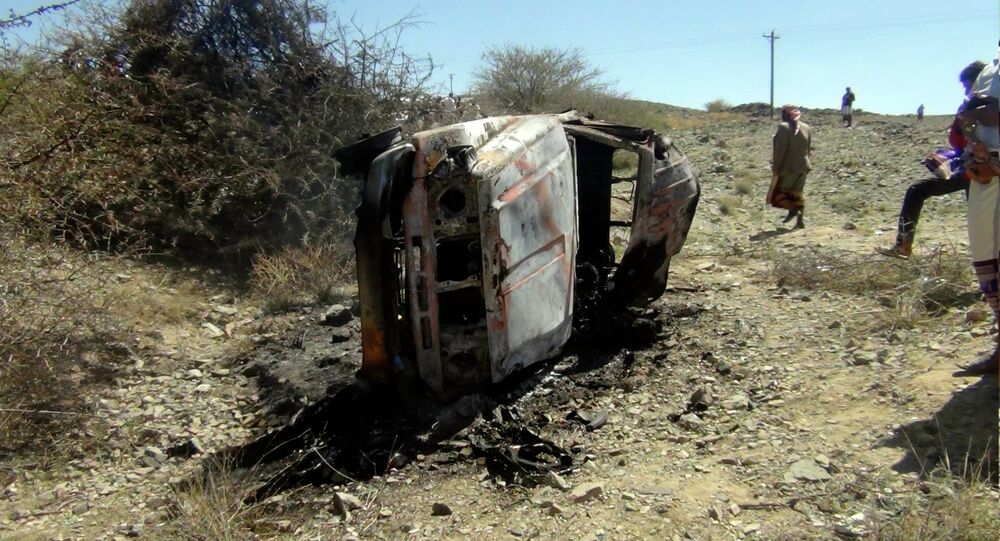 In 2018, the US Air Force carried out dozens of airstrikes in Yemen, many of which killed civilian bystanders. US drone strikes in particular have surged in undeclared war zones under President Donald Trump, but alongside the Air Force strikes are CIA operations nobody knows about ‒ not even the drone pilots’ commanders.

The US Air Force carried out 36 airstrikes in Yemen in 2018, US Central Command (CENTCOM) said in a Monday press release. Those strikes killed between 31 and 42 people, the Bureau of Investigative Journalism has reported.

While BIJ's timeline also includes 36 strikes, they aren't the same as those admitted to by CENTCOM. The former cited news reports, while the latter delineated the number of strikes by month. The result is that CENTCOM admitted to strikes BIJ couldn't find media reports about, but that BIJ also found media reports about strikes that CENTCOM never admitted to being responsible for. Of course, other countries, such as Saudi Arabia, also carry out airstrikes, including drone strikes, in Yemen, so BIJ's method of attribution is imperfect for specifically addressing US involvement in the war.

However, it is worth noting that 130 confirmed drone strikes were carried out in Yemen by the US in 2017, and 36 in 2016, the last full year of Barack Obama's presidency, BIJ reported.

The war in Yemen has been raging since the spring of 2015, when Houthi rebels ousted Yemeni President Abdrabbuh Mansur Hadi, who fled to Riyadh and begged Saudi Arabia to defend what remained of his government. Since then, up to 60,000 people may have been directly killed by the conflict, not including an estimated 85,000 children who may have died from starvation, Sputnik reported, citing the Armed Conflict Location & Event Data Project (ACLED), an NGO that collates data on conflicts around the globe.

Yemen hasn't been declared a war zone by the US, in contrast with Libya, Iraq or Afghanistan. Because of that, the burden of proof required to authorize a strike is much different. US forces in Yemen, along with other undeclared war zones like Somalia and Pakistan, operate there under the vague justifications required by the Authorization for Use of Military Force Against Terrorists (AUMF) that then-President George W. Bush signed into law a week after the September 11, 2001, attacks, Sputnik reported.

As Sputnik reported, AUMF effectively grants the president broad authorization to use "force against those nations, organizations or persons he determines planned, authorized, committed, or aided the terrorist attacks that occurred on September 11, 2001."

Incidentally, it was in Yemen that the US' conducted its first drone strike outside of a declared war zone, and it was a CIA operation: in November 2002, the agency killed six suspected members of al-Qaeda in an attack on the town of Marib.

While late in Obama's tenure, restrictions on drone warfare were relaxed, under Trump they've been all but eliminated. By Obama's 2013 rules, a standard of "near certainty" of the target's presence was required to order a strike on a specific place, as well as the absence of potential civilian casualties. However, in the early months of Trump's administration, the rules were relaxed still further, and in Somalia, the US now only requires "reasonable certainty" of the presence of al-Shabaab fighters. In other words, civilian casualties are no longer part of the calculus.

Indeed, Trump once mused to Fox News' "Fox & Friends" talk show in late 2015 that "you have to take out their families," too, and he reportedly asked a CIA official while observing footage of an agency drone strike in Syria in which officials waited until they were sure the target was far enough away from his house to avoid hurting his family before giving the order for the drone pilot to fire, "Why did you wait?"

"I don't think we can know" the extent of US airstrikes in Yemen, Brian Terrell, co-coordinator of Voices for Creative Nonviolence, told Sputnik Monday. "Part of it is that… we have statistics on the US armed forces' drone strikes, but we don't have anything that we can really know for sure about what the CIA is doing, and that's a whole separate program."

Brandon Bryant, a former drone operator for the US Air Force who became a whistleblower about drone warfare practices, told the Guardian in a 2014 interview that "it's always been the Air Force that has flown those missions. The CIA might be the customer, but the Air Force has always flown it. A CIA label is just an excuse to not have to give up any information. That is all it has ever been."

"You have at Creech Air Force base a secret wing of drone pilots who are flying drones not under military command, and even the commanders at Creech don't know what it is they're doing," Terrell told Sputnik. "They're taking their orders from people out of uniform, which is a really scary violation of the rules of war."

Terrell expressed his concern that drone strikes and special forces operations are "specifically exempted" from the congressional resolutions calling for an end to US support for Saudi forces in the Yemen war. "It's a loophole."

"I think part of the reason why people are so easily overlooking this huge exemption in this attempt to call the president to task over the War Powers Act, is because I think, you know, among my friends we really want so much to have something in Congress we can rally around, but we're throwing a lot of people under the bus by that," Terrell said.

"It's almost like a Faustian deal — in order to get a resolution condemning the US armed forces' support for the war in Yemen, we have to buy this not only as an exemption, but it seems like a reaffirmation, of the war against al-Qaeda."

"In any illegal war, everybody is a civilian, every death is a crime," Terrell said. "Every person counts, every death counts. And what the US has been doing for years in Yemen has been destabilizing, and these drone strikes are making it harder and harder for the people in Yemen to come to any kind of sane resolution to these problems."

In 2019, the US has already carried out another strike in Yemen: on Friday, Jamel Ahmed Mohammed Ali Al-Badawi, an al-Qaeda operative who helped mastermind the terrorist attack on the US Navy destroyer USS Cole while it was docked in Aden in 2000, was killed, Sputnik reported.