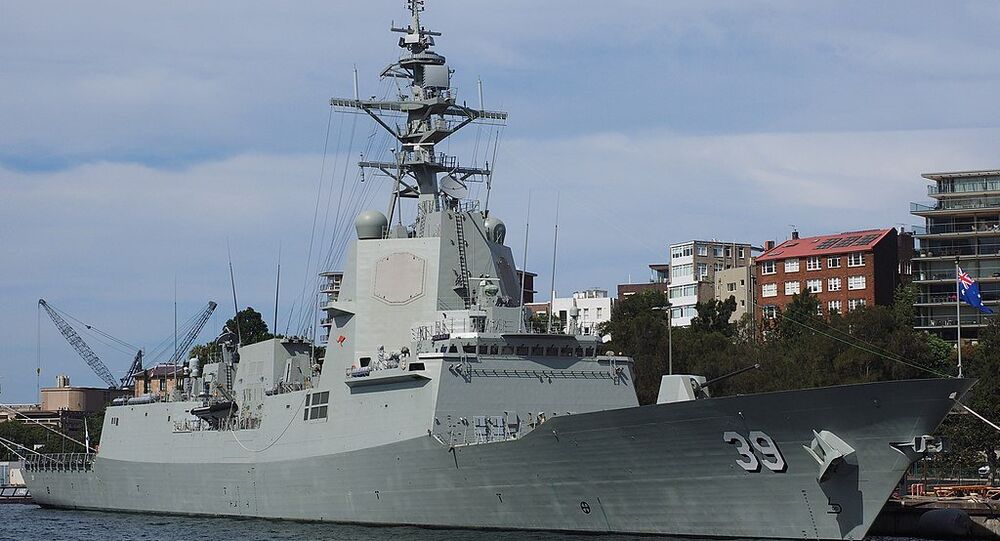 HMAS Hobart is the lead ship of her class, with two other ships planned for a total cost of $6.5 billion. It was commissioned in September 2017, with the next ship, HMAS Brisbane, being commissioned this past October, and the final ship of the class, HMAS Sydney, scheduled for delivery in March 2020.

The Aegis combat system is at the heart of the US Navy's ship-based anti-air systems as well as its offensive missile capabilities. Lockheed Martin Mission Systems received a $41 million contract in July 2017 to provide computer program maintenance for the new ships, Sputnik reported at the time.

First tested in the late 1960s as a missile defense platform for US Navy ships, Aegis, named after the mythical shield held by the Greek god Zeus, was inherited by Lockheed when it bought the system's developer, RCA. It's presently used on the Navy's Arleigh Burke-class destroyers.

One Arleigh Burke-class ship, the USS John Finn, helped Hobart test its sensor netting system off the coast of Hawaii last November in its previous set of tests.

"We were presented with some of the world's toughest and most challenging threats: modern anti-ship missiles, maritime strike aircraft, fighters and high-speed attack craft. On every occasion, we successfully defended all threats," said HMAS Hobart commanding officer Captain John Stavridis, according to an RAN statement.

"The aim was to achieve a sustainable level of combat and weapon system readiness," the report reads. The Diplomat noted the tests included a variety of combat scenarios demonstrating the ship's ability to intercept both aircraft and missiles.

The RAN has embarked on an ambitious expansion project, ordering up some of the most advanced anti-submarine warfare systems on the planet and planning to take delivery of a new vessel every 18 to 24 months for the next two decades, Sputnik reported in August.

The move is likely provoked in large part by China's massive naval expansion. According to Canberra's 2016 Defense White Paper, China's People's Liberation Army-Navy submarine fleet is expected to reach 70 boats by 2020, and half the world's submarines are expected to be operating in the Pacific by then. In addition, Beijing has ordered up a third aircraft carrier as its second, the Type 001A, heads into its final round of sea trials.