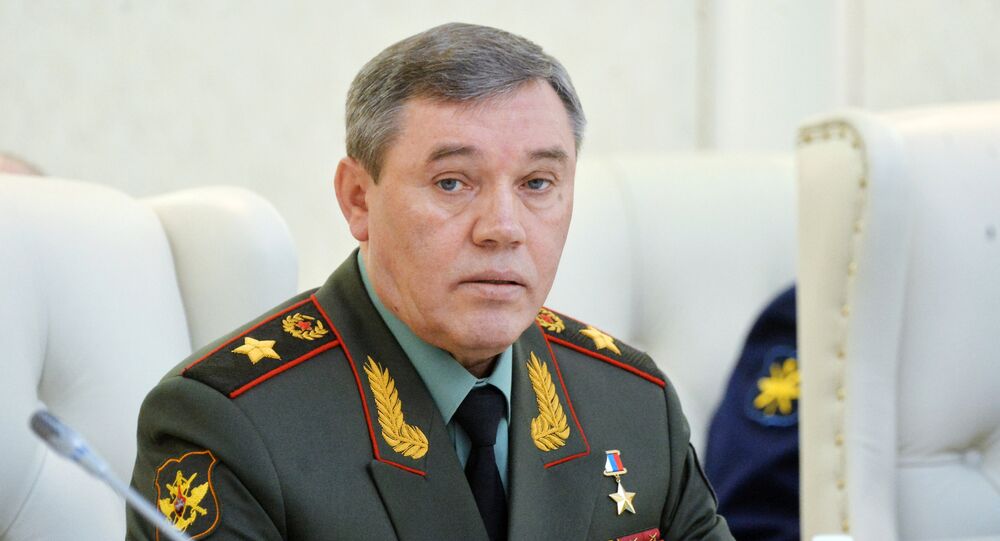 MOSCOW (Sputnik) - Chief of the Russian General Staff Valery Gerasimov and Chairman of the US Joint Chiefs of Staff Joseph Dunford discussed the situation in Syria and the fight against terrorism during their telephone talks on Friday, the Russian Defense Ministry said.

"During their talks, the counterparts exchanged opinions on the situation in Syria and fight against terrorism, as well as other pressing issues of mutual interest," the ministry said in a statement. Gerasimov and Dunford also reaffirmed the importance of maintaining the existing channel of communication, according to the statement.

© CC0 / Staff Sgt. Jacob Connor / 5th Special Forces Group (Airborne)
US Doesn't Intend to Have Indefinite Military Presence in Syria - US Official
On December 5, Gerasimov said that Russia had suggested to the United States that it eliminate its military base located in the southeastern Syrian city of Al Tanf and establish joint Russian-US control over the zone instead. According to Gerasimov, Washington has not provided an answer to that proposal. The general also stressed that the United States justified its presence in Al Tanf by the necessity of countering Iran, which is allegedly transporting weapons and military equipment to Syria.

US President Donald Trump has announced the start of the US troop withdrawal from the war-torn country, claiming that the Daesh terrorist group has been defeated, and since US troops were present in Syria exclusively to fight, they now had no reason to remain there.

Gerasimov also said in December that the Daesh militants in Syria are present only east of the Euphrates, on US-controlled territory, stressing that the so-called Daesh "sleeping" cells have progressed to active operations and begun to expand their zones of influence.

© Sputnik / Dmitri Vinogradov
Russian Military Conducts Humanitarian Operation in Syria's Aleppo - Reconciliation Center
The chief of Russia's General Staff also said in December that the terrorists in the west of Syria had been eliminated by the Syrian authorities and special services.

In November, US Department of Defense spokesman Eric Pahon told Sputnik that the more the Russian and US militaries in Syria talk to one another the better, and the existing conflict resolution channel has worked well.

Pahon said the established military-to-military channel has been working well, and there have not been any interruptions, but pointed out that the US military is prohibited from actually cooperating with Russia.

READ MORE: Is Trump Really Withdrawing US Troops From Syria?

In August, The US government extended its ban against cooperating militarily with Russia in a bilateral format through 2019, according to the National Defense Authorization Act (NDAA).

© Sputnik / Alex McNaughton
UK is 'Very Afraid' Russian Media Could Reveal Its Syria Actions - Journalist
Syria has been in a state of conflict since 2011, with the government forces of President Bashar Assad fighting against numerous opposition groups and terrorist organizations. Russia, along with Turkey and Iran, is a guarantor of a countrywide ceasefire in Syria, while it also provides humanitarian assistance to Syrian civilians and is actively engaged in dialogue on settlement to the Syrian crisis.

The US-led coalition of more than 70 members has been conducting military operations against Daesh in Syria and Iraq since September 2014. The coalition’s activities in Syria are authorized neither by the Syrian government, nor by the UN Security Council.

Daesh (also known as ISIS/ISIL/IS) is a terrorist organization banned in Russia.