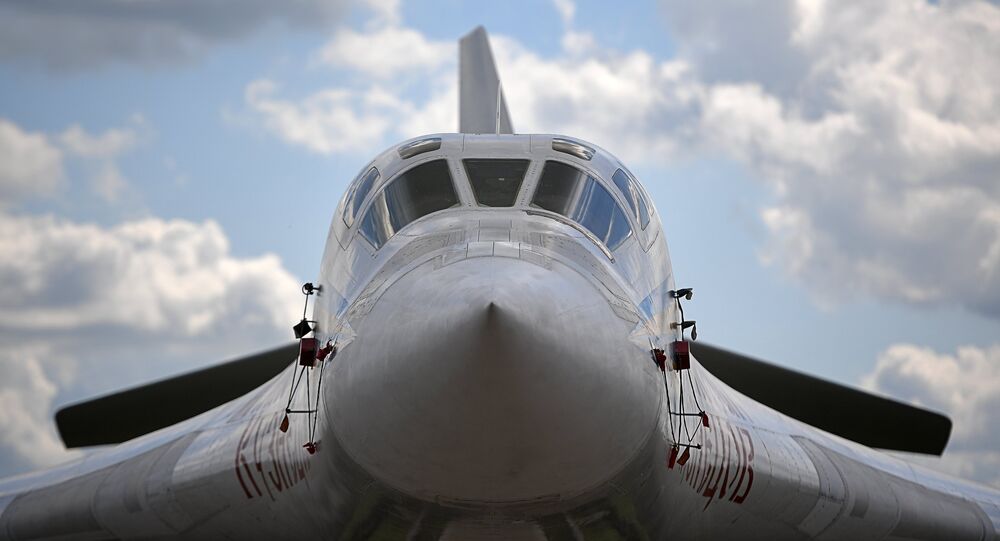 Two Russian Tu-160 strategic bombers, an An-124 military transport aircraft, and an Il-62 plane arrived in Venezuela on 10 December to conduct interoperability drills with the Venezuelan Air Force this week. The event caused a negative reaction from US Secretary of State Mike Pompeo who slammed the deployment of Russian bombers.

The Russian Defence Ministry has published footage from a recent flight performed by Russian Tu-160 (NATO codename Blackjack) strategic bombers currently stationed in Venezuela over the waters of the Caribbean Sea. The video shows not only a view of the sea, but also the interior of the plane's cockpit.

The Russian bombers flew for nearly 10 hours and around 8,000 kilometres during this flight. At certain parts of their flight they were also escorted by Venezuelan Air Force Su-30s and F-16s. Russia's Defence Ministry has stressed that the drill flight was conducted in strict accordance with international aviation laws.

Tu-160s took-off from a Venezuelan airbase early in the morning, when it was still dark, to practice take-offs on unknown airfields in limited visibility conditions. Russian channel Zvezda TV has published a video of the process.

The Tupolev Tu-160, also known in Russia as the White Swan for its huge white wings reaching a 55-metre span, is a supersonic strategic bomber developed in the early 1980s. The jet can reach Mach 2 speeds and fly up to 12,300 kilometres without refuelling. Tu-160 can also carry up to 40,000 kilogrammes of ordnance, such as 6 Raduga cruise missiles or 12 Kh-15 (NATO codename AS-16 Kickback) short-range nuclear missiles.