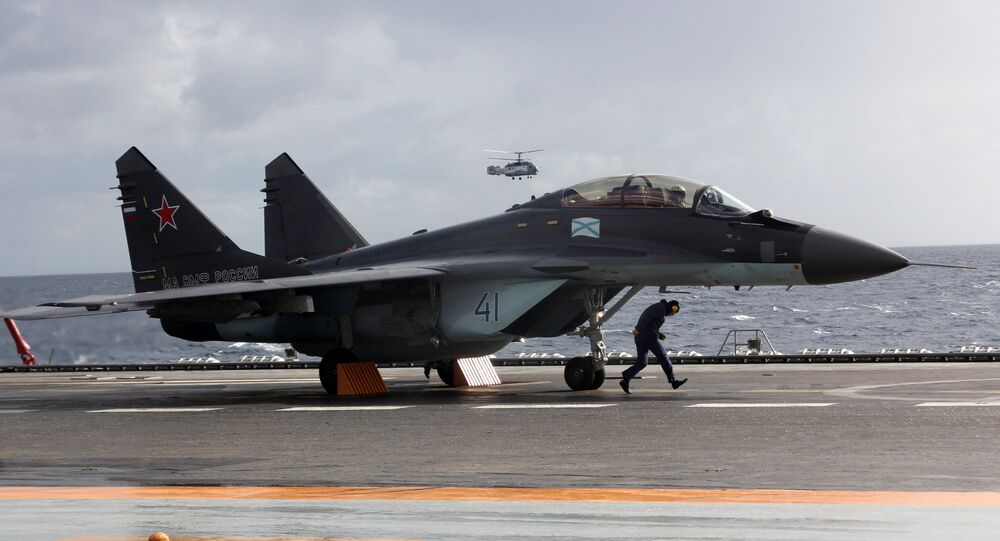 MiG-29K, being the choice of aircraft for both the aircraft carriers, viz. INS Vikramaditya and an under-construction domestically-produced aircraft carrier, as well as two naval air stations on the East and West coast, is the mainstay of the Indian Navy’s air defence fleet.

Indian Navy Chief Admiral Sunil Lanba on Monday announced that the issues related to maintenance and availability of spare parts for the MiG-29K fleet have been sorted out. Admiral Lanba also stated that the defence ministry is working on how to resolve payment issues due to the US sanctions.

The announcement holds significance as these issues were believed to have been posing major impediments to improving the serviceability of the aircraft.

"There is no issue on supplies of spare parts from Russia at the moment… The MiG-29K fleet has been performing well now," Admiral Sunil Lanba said on Monday while addressing the press on the eve of Navy Day.

Press service of the Northern Fleet
Russia Pitches Aggressively for MiG-29K Against Boeing F/A 18, French Rafale For $12Bn Indian Deal
According to a report by the Comptroller and Auditor General of India, in 2016, serviceability of the MiG-29K was unsatisfactory (37.63%) until 2015. However, recent efforts made by the two countries have improved serviceability to around 70%. Serviceability implies that the aircraft is technically available and is not undergoing a scheduled repair or overhaul at any level.

In the initial years of service, the MiG-29K was riddled with problems relating to the airframe, RD MK-33 engine, and fly-by-wire systems. Fly-by-wire (FBW) is a system that replaces the conventional manual flight controls of an aircraft with an electronic interface and allows automatic signals sent by the aircraft computers to perform functions without the pilot's input, as in systems that automatically stabilise the aircraft.

The Indian government concluded a contract in January 2004 with the Russian Aircraft Corporation MiG for the acquisition of 16 MiG-29K/KUB aircraft and associated equipment at a cost of $740.35 million, which included 13 aircraft for Admiral Gorshkov (i.e., INS Vikramaditya). Thereafter in 2010, an option clause contract for the acquisition of an additional 29 MiG 29K/KUB aircraft was concluded at a cost of $1.46 billion. The Indian Navy had placed a total order for 113 engines along with 45 aircraft (90 installed on aircraft and 23 spare engines) under the main and option clause contract.