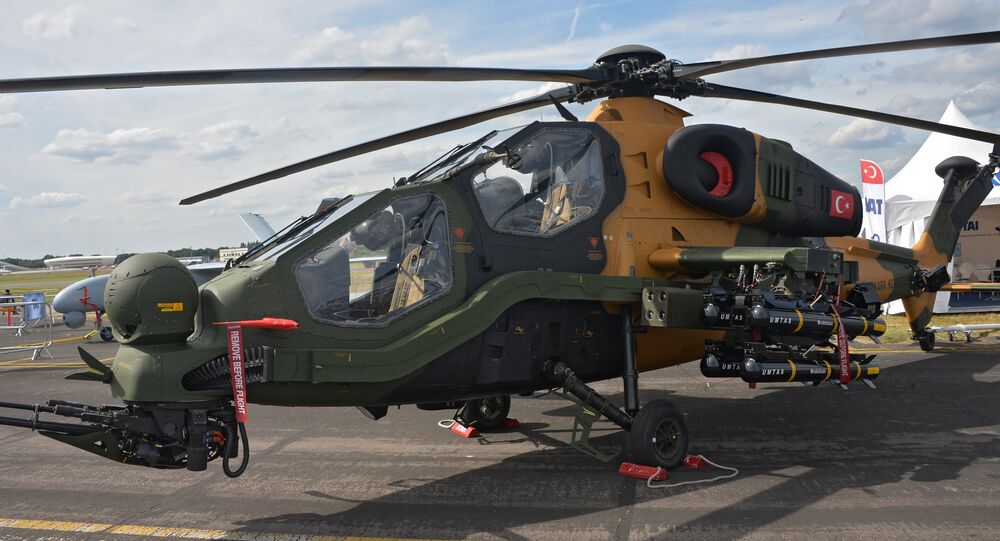 Turkish Aerospace Industries (TAI) was forced to look for a replacement to US and British-made LHTEC T8004A turboshaft engines for a defence order with Pakistan after the Pentagon refused to provide the company with an export license.

Ankara and Islamabad have agreed to look for a replacement for the US and British-made engines which were set to be installed aboard 30 Turkish T129 ATAK multipurpose helicopters as part of a $1.5 billion defence order with Pakistan, Hurriyet has reported, citing defence industry officials.

The two countries signed the chopper deal this summer, with Pakistan settling on the joint Honeywell and Rolls-Royce-made engines to meet performance requirements in high-altitude flight and poor weather conditions common in the Pakistani mountains.

However, in a move which Turkish defence procurement officials described as "purely political," the Pentagon refused to provide Ankara with the engines amid escalating tensions between the two countries in recent months.

US Army / Staff Sgt. Shane Hamann
US Suspends $1.66Bln in Security Aid to Pakistan After Trump-Khan Twitter Row
The withheld engines were believed to be part of Washington's punishment of Ankara for its refusal to back out of its S-400 air defence system deal with Moscow, as well as tensions over US support for Kurdish militants in northern Syria, the Turkish refusal to support US sanctions against Iran, and other issues, such as Ankara's detention of a US pastor and Washington's protection for an Islamist cleric Ankara believes orchestrated the July 2016 coup attempt.

Now, according to Hurriyet, engine makers in France and Poland have each expressed an interest in replacing the US and UK-built engines with French or Polish-made ones, with Turkish officials said to have received a "positive response" from both. Earlier, a senior Turkish defence official told Russian media that a Chinese engine maker was being considered as well.

© Sputnik / Grigoriy Sisoev
'Done Deal': Turkish FM Says Purchase of Russian S-400 Cannot Be Cancelled
One of these countries could win the engine contract pending testing. Pakistan originally requested that the T129 ATAK helicopters' engines be tested in the Himalayan Mountains in poor weather at a height of up to 14,000 feet.

If the tests prove successful and an agreement is reached with one of the countries, TAI hopes to complete the Pakistani defence order of 30 choppers in five years.