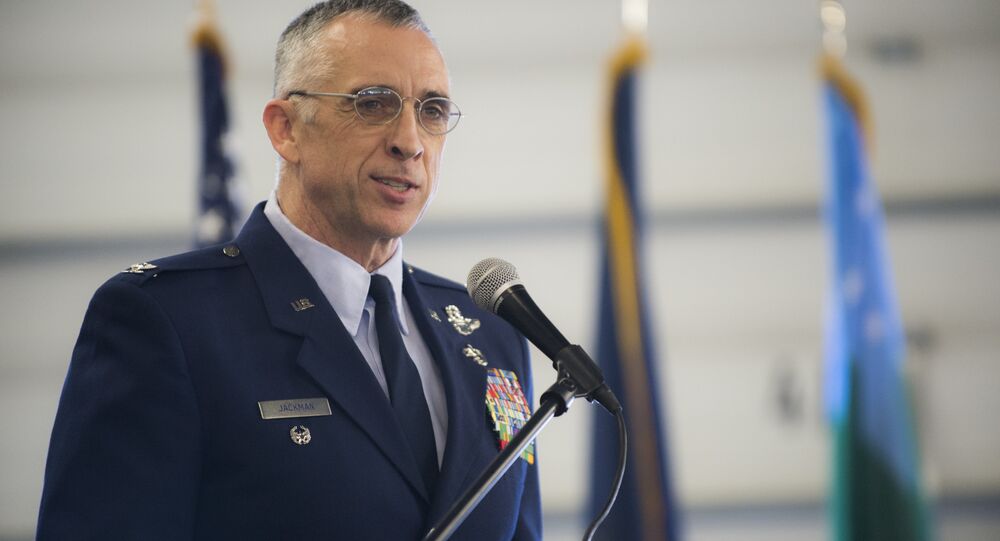 A colonel in the Vermont National Guard was forced into early retirement after being caught flying an F-16 to meet with a female colonel in the US Army.

Col. Thomas "TJ" Jackman, commander of the Vermont Air National Guard, departed his post after it was revealed that he flew down to Andrews Air Base outside Washington, DC, in 2015 for a conference that mixed work with play. Jackman and a colonel in the Pentagon seduced one another via email, though Jackman was married at the time and still lives with his wife three years after the affair took place, Washington Examiner reports.

The unidentified female colonel emailed the 32-year military veteran photos of herself, according to the report, which summarized an investigation conducted by VTDigger. In reply, the Vermont pilot told her she looked "beautiful" and that he couldn't "help but notice every part of you." In another email, the woman told Jackman, "Fun seeing your name pop up in the inbox. Always makes me smile. (and tingle…)."

The email correspondence continued from late 2014 to early 2015, when the duo tried arranging a way to meet in person between January 27 and January 29. "Get the 27th here soon… I am going to the mall today to check dresses," the unnamed female colonel said a few weeks prior to their meeting.

Jackman stayed at Andrews Air Base for the conference like the other attendees. VTDigger reported, though, that Jackman booked a room at the Morrison House in Alexandria, Virginia, on January 27 and then another room at the JW Marriott on Pennsylvania Avenue in Washington, DC, on the 29th.

Jackman flew the friendly skies in a Vermont Air Guard F-16 to meet his date. While a commercial flight from Burlington, Vermont, to the nation's capital costs a couple hundred dollars, the average cost to cruise around in an F-16 for an hour is about $8,000, according to Defense Department data. As the commander of the air wing in Vermont, almost nobody could prevent Jackman from making the trip, VTDigger noted, adding that the only air control supervisor who was on staff at the time (ret. Lt. Col. Terry Moultroup) with the authority to deny the trip didn't respond to a request for comment.

Once Jackman's bosses found out what he'd done, they took prompt action, a source who worked with the Guards and had intimate knowledge of the follow-up investigation told VTDigger. Jackman's superiors commanded him to fly home to Burlington on a commercial flight, which he did. Moultroup wound up traveling down to Washington to pick up the F-16 and fly it back to Vermont. Jackman was removed from his post as wing commander upon returning to Burlington. From there, he entered HR purgatory: he was demoted, but he hadn't yet left the service.

The Guards protected Jackman, with leadership telling him that if he would simply submit his resignation prior to his imminent punishment, he could get away from the military and still keep his retirement pay and benefits intact. In a recording acquired by VTDigger, Rick Brehm, the labor relations specialist for the Vermont National Guard, recalled "[Jackman] calling me hourly — ‘Rick, you're going to tell me that I need to resign the day before?'"

Since leaving the military, with which he'd done two tours in Iraq and Afghanistan, Jackman has retained top-secret security clearance, according to former Guards familiar with the investigation.

The woman's name has not been made public, VTDigger said, because the outlet didn't know if she'd violated military regulations through the course of her conduct. As for Jackman, he made it out with just a few minor scratches. In an interview with the outlet, he denied the affair. When asked if he resigned because of the romantic trip, he said, "No comment." Now, Jackman is a postmaster at a USPS office in Vermont and sits on a local Boy Scouts of America board. For its part, the Vermont Air Guard acknowledged in a statement that it's "not common practice" for personnel to fly on fighter jets to conferences.