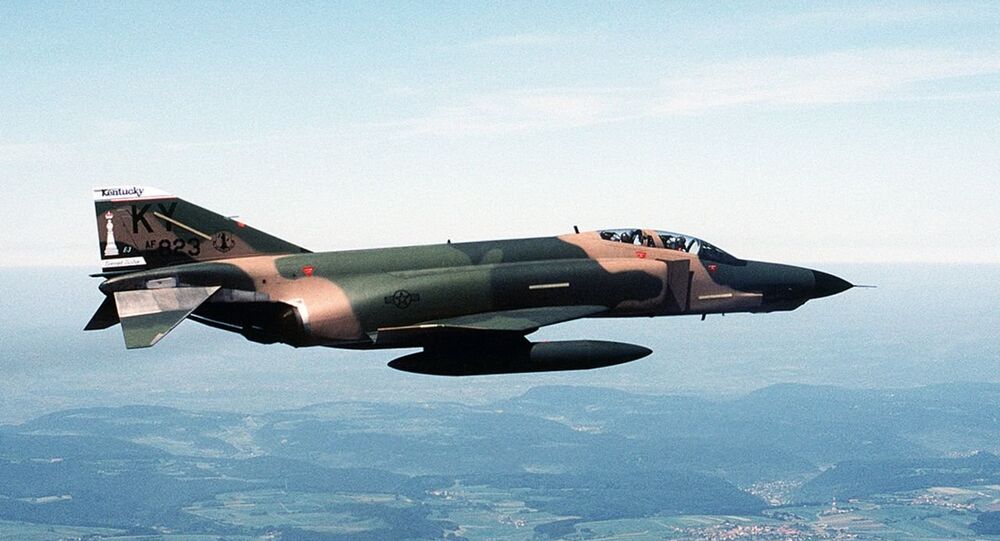 On 28 November, 1973, a Soviet MiG-21 brought an end to the joint US-Iranian reconnaissance mission in the USSR's airspace. The Russian pilot, 35-year-old Captain Eliseev, sacrificed his own life to upset the spy operation, which was part of the Cold War-era CIA programme ‘Project Dark Gene’.

Exactly 45 years ago, a Soviet MiG-21 jet fighter operated by Captain Gennady N. Eliseev rammed into an RF-4C Phantom spy jet at supersonic speed, thus preventing it from getting away with sensitive data from the USSR's airspace.

The RF-4C Phantom plane was piloted by Imperial Iranian Air Force Major Mohamed Shokouhnia and US Air Force Colonel John Saunders in the backseat. The cover story was that it was a US instructor teaching the Iranian cadet to fly on a new type of aircraft that accidentally entered the USSR's airspace.

However, in reality, this team was part of an aerial reconnaissance programme, codenamed Project Dark Gene, run by the Central Intelligence Agency (CIA) and the Imperial Iranian Air Force (IIAF) from the 1960s to the late 1970s.

© AP Photo / Carolyn Kaster
Crude, Blood, Turmoil: Story of US First 'Successful' Overseas Regime Change
The main purpose of the joint CIA-IIAF operation was to find and exploit gaps in the USSR's air defence system along the Soviet-Iranian border, stretching from the Caucasus to Central Asia.

From the 1953 coup d'etat until the Islamic Revolution of 1979, Iran and the United States maintained close relations. Under Mohammad Reza Shah, Iran used to be nothing short of a US foothold in the Middle East and a reliable supplier of crude. In turn, Tehran received economic and military aid from the other side of the Atlantic Ocean: Washington generously supplied it with weapons, equipment and dispatched military consultants to the monarchy.

According to security and military analyst Sebastien Roblin, in 1971, Tehran acquired two dozen RF-4C Phantom reconnaissance planes ‘with special modifications for listening in to Soviet communications'.

The aircraft had several aerial cameras in its specially elongated nose. Additionally, the RF-4C crew could use a long-focus camera located in an outboard container. The plane took pictures in daytime and at night, from both extremely low and high altitudes. It was equipped with an infrared scanner and a radar station. The spy jet was armed with four air-to-air guided missiles.

‘The two-seaters would typically fly on spy missions twice a month with a mixed crew of American and Iranian personnel', the military analyst noted in his 2017 op-ed for The National Interest.

The Feat of the Soviet Pilot

On 28 November, 1973, Soviet ground-based air defence systems once again detected a border violation. Captain Gennady Eliseev, a 35-year-old deputy commander of a squadron of the 982nd Fighter Aviation Regiment, was sent to intercept an unknown aircraft from the Vaziani Airfield, located in the then Georgian Soviet Socialist Republic.

Eliseev's MiG-21 drew up with the RF-4C Phantom when the spy plane was already leaving the USSR's airspace. At that time, the Phantom's speed was almost Mach 1.4 (1074.18 mph). Captain Eliseev made the decision to open fire since it was a combat aircraft that had to be forced to land as per instructions.

© AFP 2021 / INTERCONTINENTALE
After 65 Years the US Considering a New Coup D'Etat in Tehran – Iranian Scholars
He fired off both of his Vympel K-13 short-range, infrared homing air-to-air missiles at the spy plane, but failed to shoot it down. Although the MiG-21 was equipped with a 23 mm cannon, it is believed that it jammed when Eliseev pressed the trigger. However, he could not let the Phantom go: It was unclear what task it had conducted in Soviet airspace and what kind of weapons and equipment it was carrying on board. The only option left for the Soviet pilot was to ram the recon jet.

Thus, the supersonic Soviet warplane struck the RF-4C, sending the intruding aircraft into an uncontrolled dive. As a result, the MiG-21 broke apart in the air, killing the pilot, while the Phantom's crew managed to leave the damaged aircraft.

After landing, Shokouhnia and Saunders were captured by Soviet border guards. The two pilots returned to Iran just a couple of weeks after the incident. They were exchanged for information from a Soviet satellite that had previously fallen onto Iranian territory. Shokouhnia continued to serve in the Iranian air force. In a strange twist of fate, he was shot down by a MiG aircraft operated by an Iraqi pilot in 1982, during the Iran-Iraq War.