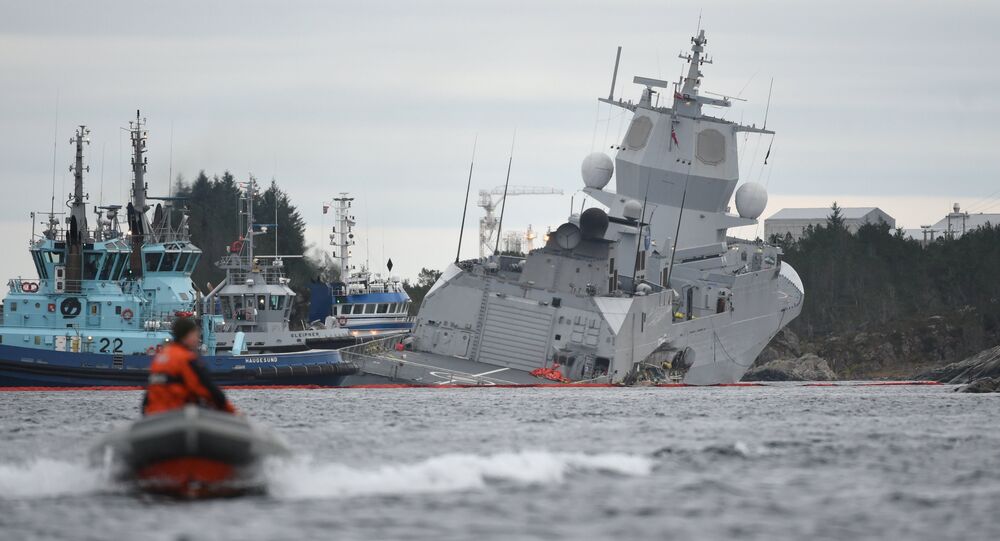 Efforts to lift the shipwrecked frigate KMN Helge Ingstad have been marred by another collision between a 50-metre-long naval ship and a 5-metre-long yacht, which Norwegian defence officials decried as 'very unfortunate'.

Two people have been taken to hospital after the KNM Olav Tryggvason, a naval vessel leading the efforts to lift the sunken frigate KMN Helge Ingstad, collided with a pleasure boat in Hjeltefjorden, the Norwegian daily newspaper Aftenposten reported.

The police were notified of the accident on Sunday afternoon. No serious damage or injury has occurred due to the incident, whose cause remains unknown.

On Twitter, the police wrote that one of the vessels was a 15-16 foot plastic boat, whose two passengers landed in the water as a result of the collision. By contrast, the KMN Olav Tryggvason is 50 metres long and weighs 791 tonnes; it is listed as a logistics vessel.

​National broadcaster NRK reported that the two were civilians, aged 51 and 44, on a boat trip.

The Norwegian defence authorities announced that the pleasure boat had collided with the naval vessel on the port side.

"About 16.20, we received the first report that there had been a collision between a smaller vessel and the KNM Olav Tryggvason," Brynjar Stordal, press spokesman at the Armed Forces operating headquarters (FOH), told Aftenposten.

Stordal added that the KMN Olav Tryggvason was engaged as a commanding vessel in the efforts to salvage the frigate KMN Helge Ingstad, which sank after colliding with the tanker Sola TS after massive NATO drills Trident Juncture on 8th November.

According to marine data, the vessel was heading to the naval base Haakonsvern at 8-9 knots straight from the place where the Helge Ingstad currently lies.

"We do not know the cause of the accident, but the Armed Forces accident commission has been routinely notified of the incident," Stordal said, calling the two collisions happening in the same area in such short time 'very unfortunate'. He emphasised, though, that these are two separate incidents.

Meanwhile, efforts are underway to lift the helicopter-carrying KMN Helge Ingstad, which is lying on its side in a shallow bay, submerged after receiving a 10-metre-long gash on its starboard. The Helge Ingstad is seen as one of the centrepieces of the Norwegian Navy with a price tag of about $420 million, a figure comparable to the navy's annual budget. Defence specialists argued that most of the equipment on board may have been destroyed by the collision and saltwater.