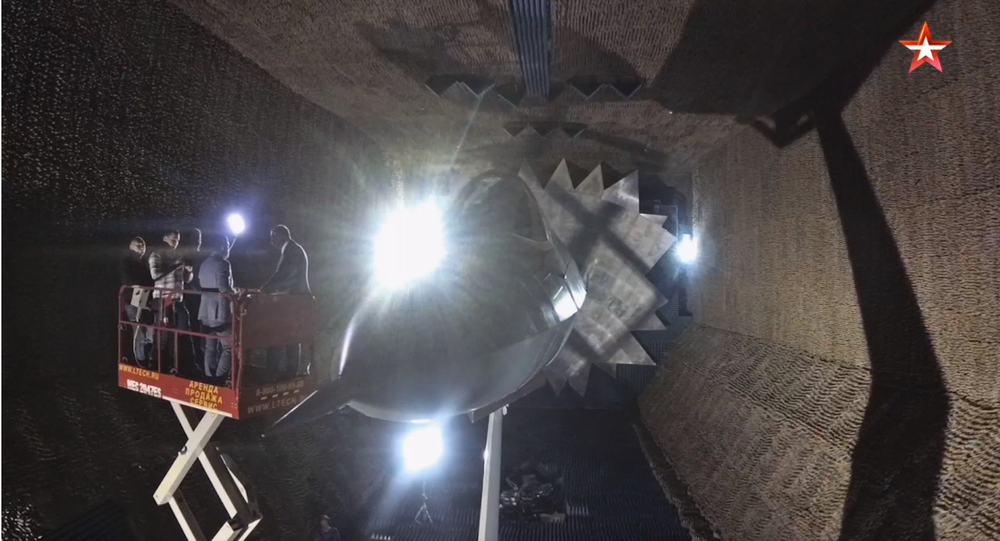 Sukhoi will begin deliveries of its new fifth-generation air superiority fighter jet to the Russian military in 2019, with the aircraft packed with cutting-edge avionics, electronics and weapons systems.

A correspondent from Zvezda, the official TV channel of the Russian defence ministry, has been given an extraordinary opportunity to check out just how the Su-57's components are tested at Russia's largest anechoic chamber to calculate the plane's stealth characteristics.

The video shows the plane's nose section as it is irradiated with electromagnetic waves to determine the plane's expected radar visibility (a.k.a. its effective radar cross section) to enemy radar systems.

All of the Su-57's components, including its wings and engines, have been tested at the anechoic chamber, which involves putting them on a stand in the center of the chamber and rotating it, during which electromagnetic waves are applied.

YouTube / Zvezda
WATCH Moment Wing Breaks Off From Airframe of Russia's Su-57 Stealth Fighter
Speaking to Zvezda, Andrei Lagarkov, veteran Russian physicist and director of the Su-57 program's special characteristics department, explained that the testing allows designers to determine whether the aircraft has enough layers of camouflage to avoid radar detection. If not, the plane is fitted with additional coatings of a special paint.

"You can create an airframe out of the radar-absorbing material. This is also an option. This would be the best option, but raises the question of the aircraft's durability," Dr. Lagarkov explained.

Pointing to the example of the B-2 Spirit stealth bomber, Zvezda noted that the tradeoff for impeccable radar visibility characteristics often include reduced speed and maneuverability performance.