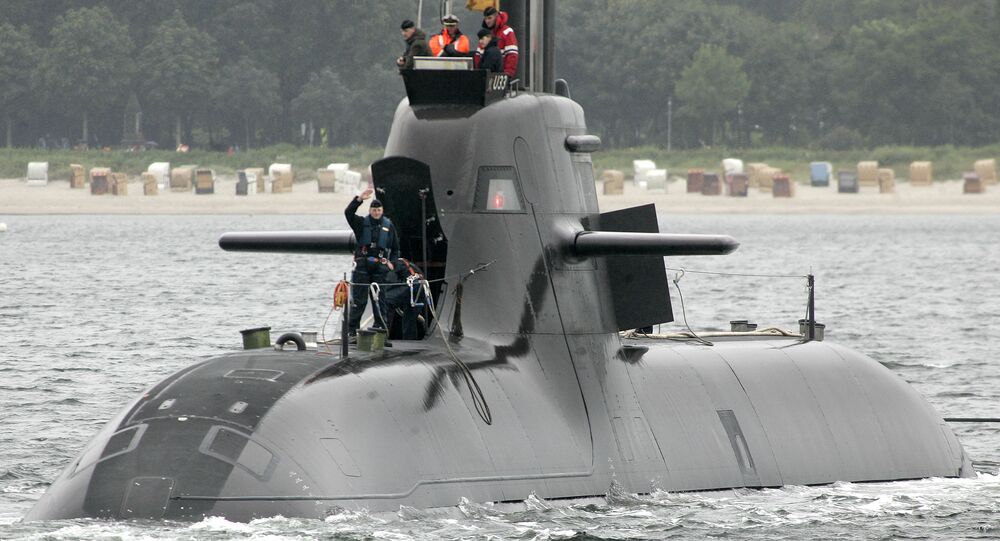 The European states have started major naval exercises in the Baltic Sea, with Germany taking a leading role; they are preparing themselves for – you guessed it – the Russian threat.

The nations of Europe seem to be bulking up their navies, and Germany is taking the lead among them, as they prepare to counter a presumed threat from the East — Russia.

On Sunday, Reuters reported that on Monday, Germany is set to commence major naval exercises off the Finnish coast, which ill include 3,600 sailors and troops, 40 ships and 30 aircraft from more than a dozen European countries. The focus of the drills is keeping the Baltic Sea safe for trade transports.

"The Baltic Sea is our front yard, so we and our neighbors obviously want to be able to move freely on the sea lines," Captain Sven Beck told reporters aboard the German frigate Hamburg.

© AP Photo / Czarek Sokolowski
Polish President Pushes for War Reparations From Germany
Russia has repeatedly stated it has no intention to threaten anyone in Europe with a military offensive. However, responding to the deployment of a US missile defense system, which, according to military experts, can be re-purposed for launching offensive missiles itself, Russia deployed its Iskander-M missile launchers in Kaliningrad Region back in 2013. In February 2018, the head of the State Duma Defense Committee Vladimir Shamanov acknowledged that these weapons are stationed there permanently.

However, western military experts believe that in the case of armed conflict, Russia will block the Baltic Sea, cutting trade lines and making it difficult for Western Europe to provide naval military support to the Baltic countries bordering Russian territory.

According to the Reuters report, the Baltic Sea is shallow and has narrow straits, which makes it easy to block it with minefields. During the exercise, the European military ships will practice clearing mines, escort cargo ships and simulate the use of force.

"The aim of our exercise is to secure the sea lines of communication, those lines that you can't see but that guarantee trade and prosperity in the countries along the Baltic coast," Captain Beck told reporters.

© REUTERS / LPhot Kyle Heller/MOD
Captain of UK's Most Powerful Ship Wants 10,000 More Sailors in Royal Navy
Since 2014, when Crimea voted to join Russia and a civil war sparked in Ukraine, Germany has been trying to take a leading role in Europe in terms of naval power, Reuters reports, by establishing regular fleet commander meetings the following year, and by starting the construction of a new command center in Rostock. The center is supposed to become operational to lead European operations in the Baltic in 2023.

This signals that Germany is slowly getting rid of its "post-World War II reluctance to take the military lead", the report says. German Defense Minister Ursula von der Leyen said last month that Germany must "take more responsibility for the region."

"We don't have a big navy, but in relation to the Baltic countries it is huge. So we are happy to take the responsibility," Captain Beck echoed.

And it looks like Europe is rather happy to hand this initiative to Berlin.

"We are very happy that Germany has taken the lead in that sense," Finnish navy chief Admiral Veijo Taipalus said.

© Sputnik / Vladimir Rodionov
Russia Considers US Decision to Exit INF Treaty an 'Objective Fact'
For most of the Cold War and the following decades, the United States took a leading role in NATO, taking upon itself the responsibility to protect Europe from Russia. However, President Trump more than once called upon the EU, and Germany in particular, to ramp up their own defense spending. Earlier last week, the former Commander of US Forces in Europe, retired General Ben Hodges further hinted that Europe should learn to defend itself, saying that the US "does not have the capacity to do everything it has to do in Europe and in the Pacific to deal with the Chinese threat."

It looks like Europe, led by Berlin, finally decided to do just that.

Brazilian Meddling, Germany Punishes the Saudis, China vs US in Central America