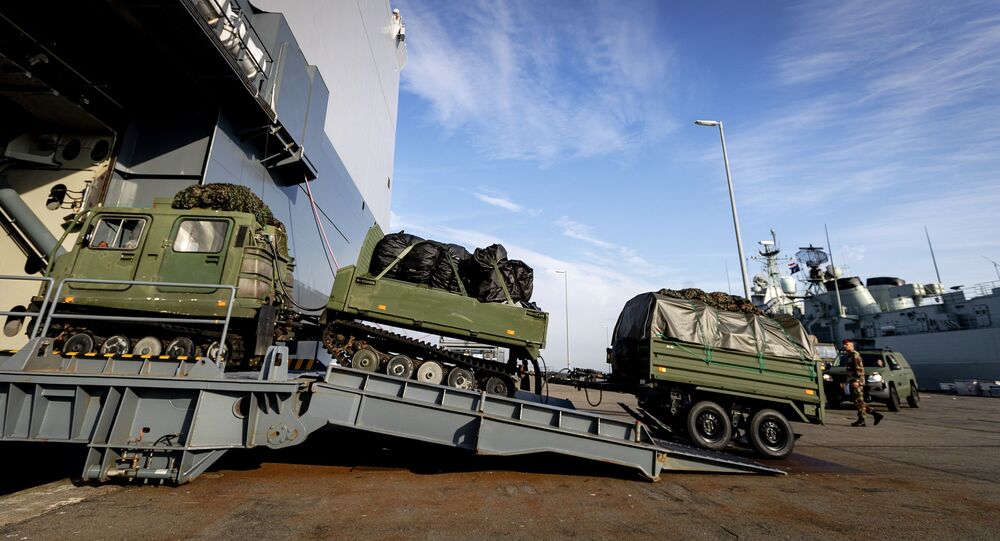 A large-scale drill involving about 50,000 from 31 nations has prompted the opposition of Norwegian politicians and has been slammed for exacerbating tensions between the US and Russia, placing Norway between a rock and a hard place.

The major Trident Juncture exercise, which kicks off today and is the largest in decades, is part of a new cold war between Russia and the United States, Julie Wilhelmsen, a researcher at the Norwegian Institute of International Affairs (NUPI) told the daily newspaper Klassekampen.

"Few thought a new cold war would spread north, but now it's moving with record speed, and this exercise is a sign of it," Julie Wilhelmsen told the newspaper.

In drills, unseen since the early 1980s, 50,000 NATO soldiers are in place to practice the defense of Norway against the fictional land of Murinius. Trident Juncture is being accompanied by the US air drill Northern Screen involving 1,000 US soldiers in Troms County. The nuclear-powered aircraft carrier USS Harry S. Truman is also part of the drill.

According to Wilhelmsen, Trident Juncture must be seen as one of the numerous factors increasing the tensions between Norway and Russia. Hundreds of US soldiers stationed at several bases across Norway and extensive NATO exercises have triggered condemnation from the Russian authorities. Russia (and many Norwegian politicians as well) believes Norway is violating its self-imposed ban from 1949 on having foreign bases on Norwegian soil. Wilhelmsen herself argued that the Norwegian government is departing from the country's time-tested defense policy, characterizing the development as scary.

"From 2008 onwards, Norway has expressed the wish that NATO's attention should be shifting north, with a heavier military footprint, especially from the US," the NUPI researcher told Klassekampen. "The policy of balance, which is both deterring and at the same time reassuring, with close contact and restrictions on military presence from other nations in place, seems to be deprioritized," she said.

Bjørnar Moxnes, the leader of the Reds, is also alarmed by recent developments.

"Norway is a small country. We have everything to benefit from a world where conflicts are solved through dialogue and international bodies such as the UN, not through arms races," Moxnes told Klassekampen. He noted that the Norwegian government should rather show wisdom than servility to the US. "Neither the Russians nor the Americans will protect the Norwegian civilian population if Norway were to become a battlefield between superpowers," Moxnes concluded.

Lars Haltbrekken of the Socialist Left Party (SV) blasted the arrival of the giant US nuclear-powered aircraft carrier, whose motto is "Give'em hell," calling its presence in Norwegian waters unwise and unfortunate.

Ahead of the drill, protests featuring a number of organizations, NGOs and political parties were held in several Norwegian cities. Geir Hem, one of the leaders in Oslo against the NATO exercise Trident Juncture, called the drill a "lesson in subordination," suggesting it merely emphasized the role of the US.

Trident Juncture is billed as a defensive exercise, ensuring allies' ability to come to Norway's rescue if NATO's Article 5 is triggered. The drill is taking place between October 25 and November 7, with 50,000 soldiers from 31 nations, 250 aircraft, 65 vessels and over 10,000 vehicles. The Americans are the largest contingent with 18,500 soldiers, which is more than Norway's entire Armed Forces during peacetime.