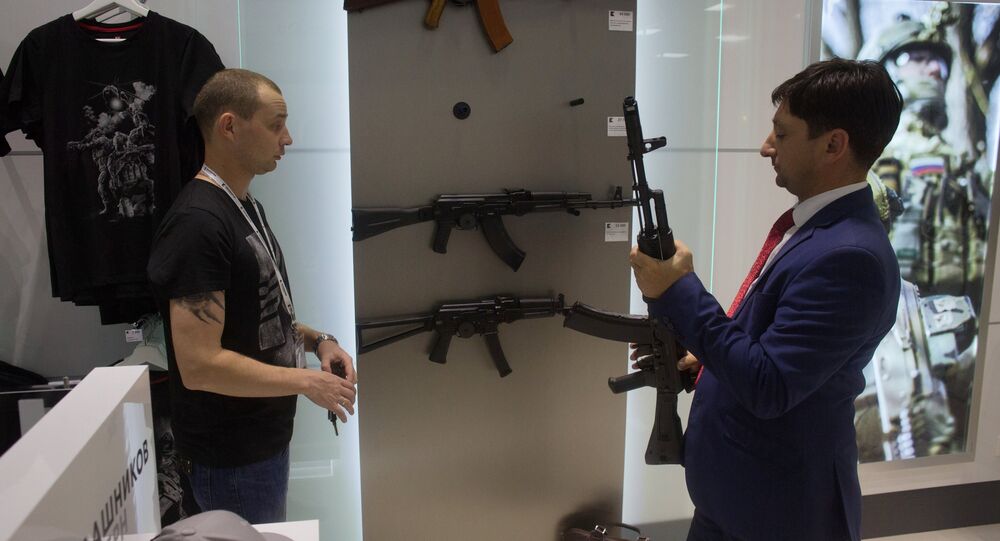 MOSCOW (Sputnik) - The Russian state corporation Rostec has stated that the idea to produce copies of the NSV heavy machine gun in the United States without a relevant request to the Russian state arms exporter Rosoboronexport would be a "theft."

"Such ideas, if they really exist, once again prove the advantages of Russian weapons … However, the idea itself raises questions. If someone wants to do this work legally, in compliance with all the rules, they should discuss it with Rosoboronexport. Otherwise, it is an illegal copying of Russian products. In other words, it is a theft," the corporation’s press service said.

The desire of the United States to produce copies of the Kalashnikov machine guns proves the reliability of the Russian-made weapons, but there is no information about any concrete plans, Russia's Kalashnikov Concern defense manufacturer stated.

"We are not aware of such plans. But we are not surprised, as this once again underlines the reliability and quality of our weapons," the company's statement read.

© Sputnik / Valeriy Melnikov
Kalashnikov Concern Develops Outfit for Arctic Special Forces - Statement
On October 9, the National Interest media outlet reported that the US Special Operations Command (USSOCOM) was offering grants to the US companies which will be able to "produce fully functioning facsimiles of foreign-made weapons," namely, the Russian Pulemyot Kalashnikova Modernizirovany (PKM) machine gun and the NSV heavy machine gun, while the manufactured weapons should be "equal to or better than" the prototypes.

The USSOCOM will not provide any technical drawings, parts and raw materials to the interested companies. Applicants for the SBIR project will have to manufacture the weapons only on the US territory, using only the US-produced materials and employing only the US citizens.

© Sputnik / Aleksey Nikolskyi
WATCH Putin Try Out Kalashnikov Concern's New Semi-Automatic Sniper Rifle
While the companies are currently suggested to produce copies of two Russian machine guns, the USSOCOM may encourage them to manufacture copies of some other foreign weapons in future.

According to the National Interest, this USSOCOM's move may be related to Washington's plans to provide the copies of the weapons to various groups operating in Iraq, Syria or other unstable regions. The outlet qualifies the idea of producing US copies of foreign weapons instead of procuring them abroad as a "sensible and economical" one.