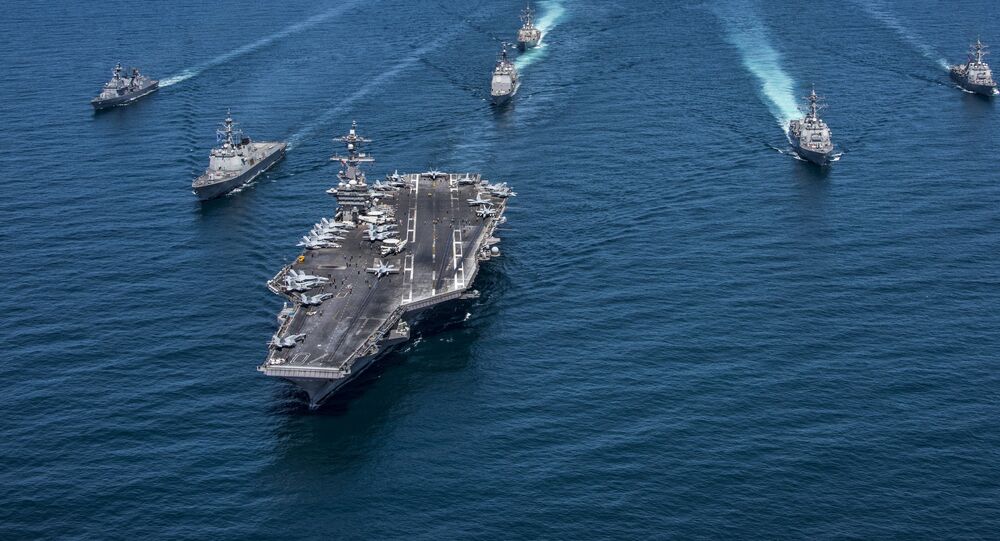 Following a dramatic close call between US and Chinese destroyers in the South China Sea, the US Navy’s Pacific Fleet wants to put on a major show of force in the body of water before the end of the year.

Military officials told CNN Wednesday that the Navy wanted to send warships and aircraft through the South China Sea — and close to Chinese-claimed islands — in November to send a message to Beijing.

The US Navy characterized the encounter as "unsafe and unprofessional."

But this episode is not the only recent provocation in the region: twice last week, the US sent B-52 Stratofortress heavy bombers though the South China Sea, exercises that were immediately followed by joint exercises with Japanese planes over the East China Sea and Sea of Japan, Sputnik reported. The B-52 is the US Air Force's largest bomber and a key part of the US Nuclear Triad, capable of carrying several large thermonuclear bombs.

Following those flights, which Beijing called "provocative," it warned the US it would take "necessary measures" to defend Chinese interests and conducted live-fire drills in the waterway shortly thereafter.

At the Hudson Institute Thursday, US Vice President Mike Pence issued a blunt warning to China that the US would not back down from what it sees as Chinese threats and attempts at intimidation in the South China Sea.

"Despite such reckless harassment, the United States Navy will continue to fly, sail and operate wherever international law allows and our national interests demand. We will not be intimidated. We will not stand down," he said.

The Chinese Defense Ministry has not yet commented on the report, but a Chinese diplomatic observer told the South China Morning Post that the US was escalating the confrontation by expanding its operations in the sea to include the Taiwan Strait.

Yun Sun, co-director of the East Asia Program and director of the China Program at the Stimson Center, told Sputnik Thursday that China "has set a course of countering US military activities in the [South China Sea], as we can see from the recent naval encounters in the region. I doubt that China will change its current course or tone down its own actions when US strengthens its activities — that will demonstrate China's weakness and undermine its previous positions. We hope both sides will exercise restraint and not let it escalate."

Noting that one of the beneficiaries of such a showdown would be Russia, Yun said that Southeast Asian countries "want to see enhanced US commitment in the region, but they don't want a conflict between US and China. They would want China to stand down, but it is questionable China will stand down in the face of US pressure."

On Monday, US Defense Secretary Jim Mattis told reporters during a flight to Paris, "We're just going to have to learn how to manage this relationship." Noting that he would be speaking with his Chinese counterpart "when the time is right," he promised, "We'll sort this out."