The book says the Trump administration was seriously concerned about the possibility of Hezbollah dragging the US into a “catastrophic” Middle East war.

The recently-published book entitled "Fear: Trump in the White House" says that in February 2017, early in the Trump administration, top US officials were seriously worried that Israel could not defend itself against a possible attack from Hezbollah, should one ever occur. Such an incident would have had "catastrophic" consequences, the book says.

The book, by journalist Bob Woodward, cites National Security Council staffer Derek Harvey giving a briefing at some point early in Trump's presidency. According to Harvey, Hezbollah had accumulated a whopping 150,000 rockets, a huge increase from the approximately 4,500 it had during the 2006 war with Israel.

"Hezbollah was a perfect proxy for Iran to use to pressure and attack Israel, whose air bases could be pummeled with rockets," Woodward writes in his book. "Israel's defenses of Iron Dome, David's Sling and Arrow missiles would be inadequate."

Further, Harvey reportedly cited "sensitive intelligence" saying Hezbollah had some 48,000 full-time military personnel in Lebanon, presenting "an existential threat to the Jewish state," and the group was said to have some 8,000 troops in Syria and Yemen, not to mention regional "commando units."

A possible Iranian-Israeli confrontation could have sparked a "catastrophic war," as the United States would have been dragged into the conflict, Woodward writes.

When Trump adviser Jared Kushner allegedly agreed that Hezbollah should be addressed in a stronger way, Harvey told him that Iran's Revolutionary Guard Corps was "integrated into the Hezbollah structure," with Iran funneling roughly $1 billion into the organization each year, Woodward writes.

"Harvey felt the others did not appreciate the degree to which the fundamental balance of power had shifted," Woodward writes. "A full-scale assault could impact [Israel's] ability to actually fight." 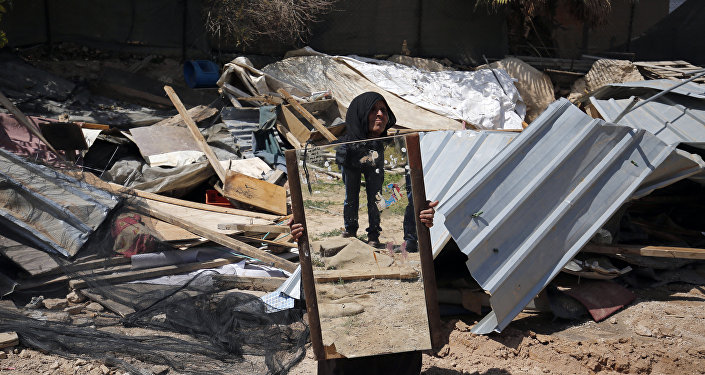 © AFP 2019 / ABBAS MOMANI
EU Warns Israel Against Demolition of Palestinian Village of Khan al-Ahmar
The report appears to have marked the end for Harvey. According to the book, Israeli Ambassador to the United States Ron Dermer reportedly wanted Harvey to travel to Israel to meet with the country's top military brass, but McMaster, Harvey's boss at the time, did not allow that to happen.

"McMaster said Harvey couldn't go, though he gave no reason," the book reads. However, Harvey did meet with Israeli officials in July 2017, but no plan for countering Hezbollah was ever created.

Later that month, McMaster fired Harvey, only to himself be ousted in March 2018 by President Trump. The book speculates that the arms deal Trump reached with Saudi Arabia during his May 2017 trip to the kingdom might partially be a consequence of Harvey's findings, as Riyadh is a regional rival of Tehran. However, no formal agreement has ever been signed between the US and Israel regarding how to deal with Hezbollah, the book points out.

Hezbollah: Terrorists Behind South Syria Attacks Got Arms With US 'Assistance'