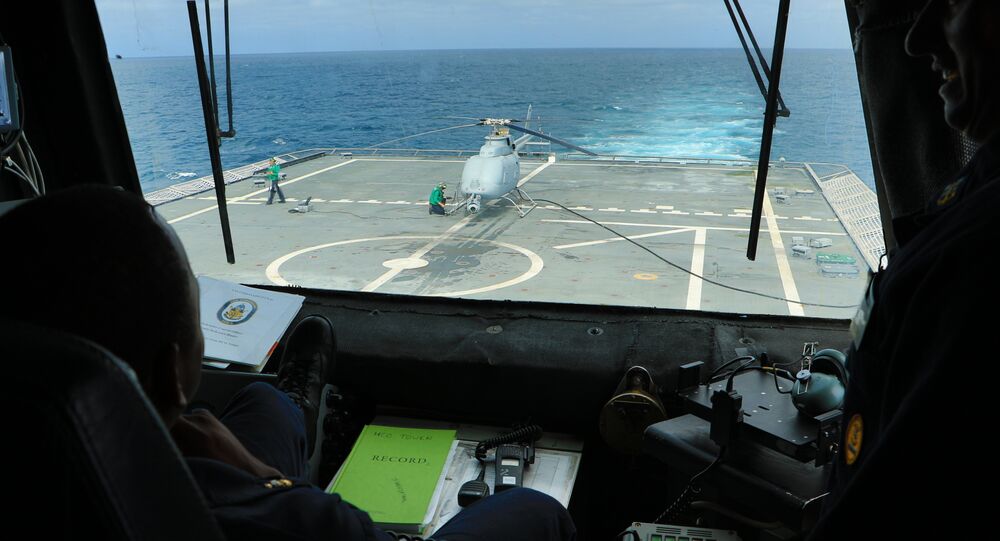 The US Navy took a step toward integrating unmanned aircraft into its naval aviation operations in late June as the MQ-8C Fire Scout successfully completed its initial round of testing.

"Results from this [Initial Operational Test and Evaluation] will inform decision-makers on how to best integrate the Navy's newest unmanned helicopter with littoral combat ships and other platforms," the US Navy said in a July 9 announcement.

The drone chopper completed testing from the deck of the littoral combat ship USS Coronado in the Pacific Ocean off the coast of California, the release notes. The Fire Scout was tested to see if it could perform joint missions with manned aircraft, specifically the Navy's MH-60S Seahawk helicopter. "Results confirmed that while it requires extensive planning and coordination across the ship, simultaneous operations can be conducted," the Navy said.

U.S. Navy
A SeaHawk, to the left, and a Fire Scout, just above the ship, perform simultaneous flight operations.

The next steps for the Fire Scout include pierside testing with "a focus on maintenance and cyber," the Navy noted.

The Fire Scout completed its first flight from onboard a naval vessel in 2014, with "underway testing" carried out in April 2017 in conjunction with the USS Montgomery, which is similar to the USS Coronado in that they are both littoral combat ships.

One of the other major developments in unmanned naval aviation in the US military is that of the MQ-25A Stingray, a carrier-based unmanned refueling tanker.

The Stingray program evolved out of the Unmanned Carrier-Launched Airborne Surveillance and Strike (UCLASS) program. Following internal discussions about whether the Navy should tailor the UCLASS aircraft more toward bombing or scouting, the Pentagon decided to do neither. "What you're going to see is not a UCLASS anymore; It's a carrier-based tanker that is going to be integrated into the carrier air wing," a defense official told Breaking Defense in 2016.

That decision led to the conclusion that, without an unmanned strike aircraft taking off from carriers, the Navy would need to procure more F-35C aircraft, the fifth-generation jet variant designed to take off from carriers, as well as more modernized F/A-18 Super Hornets. "We decided to accelerate F-35C buys," the official told BD. (The Pentagon later clarified that the MQ-25A Stingray will have "limited strike" capability.)

Perhaps it is a mere coincidence, but a recent flyoff between the A-10 Warthog and US Air Force variant F-35A aimed at learning which aircraft is better at close air support missions was reportedly rigged to make the F-35 look better at this type of mission than it really is, thus justifying more purchases of the F-35 moving forward.