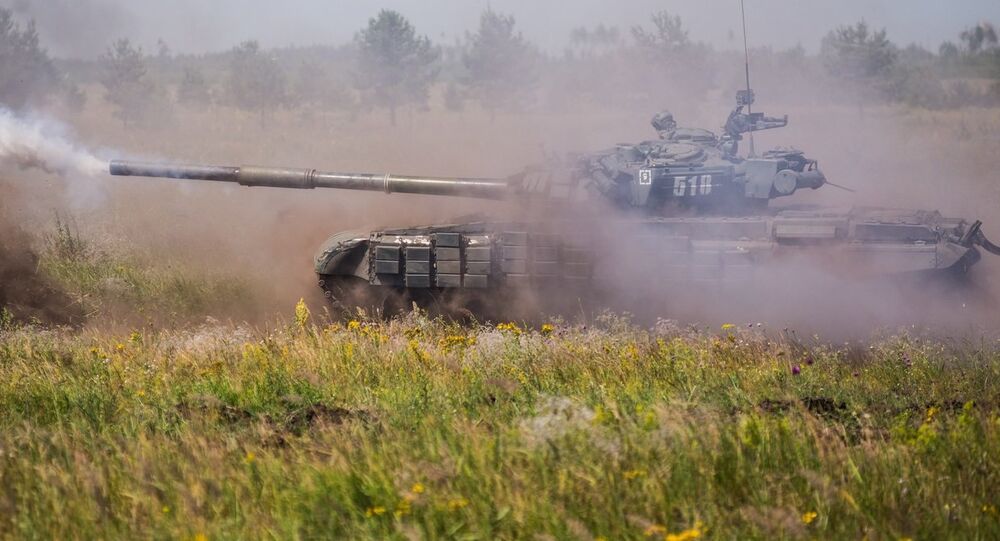 In an era of localized conflicts without clear front lines, jihad-mobiles equipped with anti-tank guns and IEDs, the idea of large tank armies facing off along vast fronts has become a thing of the past. Rossiya Segodnya journalist Andrei Stanavov takes an exclusive look at how modern warfare has changed Russian thinking on the use of armor.

For training purposes, the older T-72s are often sufficient. "The main advantage of the T-72 family is the tanks' exceptional reliability and trouble-free operation even in the most difficult operating conditions – in heat, extreme cold, and high humidity. If the tank breaks, it can be repaired directly in the field," Stanavov wrote.

"This maneuver is called the 'tank carousel', " tank company commander Captain Roman Schegolev told the journalist amid the tanks' movements.

"It allows us to fire over an unlimited time period. There can be three, six, nine or more machines. They move uninterrupted in a circular motion, one pummeling the enemy, the other moving to the rear and reloading, the third preparing to enter firing position, and so on. Non-stop shooting; just make sure to feed the shells," the officer explained.

"The carousel could be compared to the rotating drum of a revolver," Stanavov explained. "Only instead of cartridges there are tanks, and instead of bullets – powerful 125-mm shells. The scheme is used when it is unknown what kind of armament the enemy has at his disposal – tanks, anti-tank guided missiles (ATGMs) or grenade launchers."

"Imagine tanks shooting for ten, twenty, thirty minutes at a time without a break," the officer said. "On the other side they will break down and open return fire, revealing their armament. Then our disguised sniper tanks with specially trained crews step into action. They quickly and efficiently strike the identified targets."

In Syria, the journalist explained, the tank carousel has been a particularly effective tactic during the Syrian Army's operations in the country's geographic conditions of earthen and sand parapets. Here, tanks can move along the parapet and, when they reach an opening, shoot, quickly concealing themselves back behind the embankment. So long as they remain in constant motion, it becomes almost impossible to aim at or hit them. Furthermore, to deceive the enemy, the commander can choose which opening to fire from at random, giving the impression there are more tanks deployed than in reality. Openings can be created using engineering equipment, and if necessary, by the crew itself.

© Sputnik / Mikhail Voskresenskiy
The crew of a T-72 tank of the 10th Division, 2nd Corps of the Syrian Arab Army are on combat alert off Katana, Damascus Province

"The scheme works even with a small amount of tanks," Schegolev said. A single tank platoon can achieve an intensity of fire so high that the enemy will think there is at least a battalion attacking it."

Another tactic explained by Schegolev is the idea of 'tank trousers', which involves tanks alternating fire between two trenches, without staying in one position for more than a few seconds. The tank enters the trench, fires, kicks into reverse and moves to the next. Enemy anti-tank weapons don't have time to react.

Along with the carousel, tanks can operate in pairs, crosswise, or according to seemingly completely random patterns. "These operations are rather complicated, and require a high level of crew training, Senior Lieutenant Vladislav Seliverstov said. "We are constantly training, with at least two shooting drills and one driving one each week."

In addition to move and shoot maneuvers, the 20th Guards Combined Arms Army trains to hone their skills in firing from a closed firing position – a tactic invented during the Great Patriotic War. "With the advent of new long-range tank guns and stabile in-flight ammunition, this tactic has acquired particular urgency," Stanavov explained. It allows for plunging fire by tanks, effectively turning them into a sort of howitzer.

"Our shells are very stable in flight, so this technique allows us to inflict maximum damage on the enemy at a very long range," Senior Lieutenant Seliverstov explained. "The enemy does not actually see the tanks, which means he cannot suppress them with traditional means – recoilless guns, ATGMS and grenade launchers. Only long-range artillery and aviation, which need time to deploy, will do any good. But time is not something the enemy will get; the tanks come in, shoot and leave."

Russian tankmen have honed the skill of their plunging fire considerably; at a distance of 8 kilometers, high explosive shells hit within 15-20 meters of their target. Accuracy is further improved by modern equipment present on the T-72B3s, including the Sosna-U sight, digital ballistics computer, sensors for wind and temperature conditions and an automatic target tracking system which takes account of the movement of the target and the tank itself. At night, guidance devices operate using the main sight's thermal imagining system. "The thermal imager is so powerful that one winter I saw a hare in it from a distance of 2 kilometers," Seliverstov noted.

Crew Makes All the Difference

© Sputnik / Vasili Batanov
Take an Exclusive Look Inside the Novorossiysk, the Russian Navy's Super-Quiet Attack Sub
According to Schegolev, the most important principle in Russian tank crew training is forming a tight-knit unit which understands one another at an intuitive level. "We immediately look at who works with whom and how. If we see that the gunner and tank commander have found a common language, we put them in one crew and test their firing. The difference between a tight-knit team and a green, unfamiliar one is like heaven and earth," he stressed.

"In any case, no matter how modern and well-equipped a tank may be, it remains only a tool, whose combat effectiveness depends on the skill and cohesion of its crew…If in one crew's hands the tank is just a comfortable target for an enemy, in another's it can be an elusive, deadly machine," Stanavov concluded.