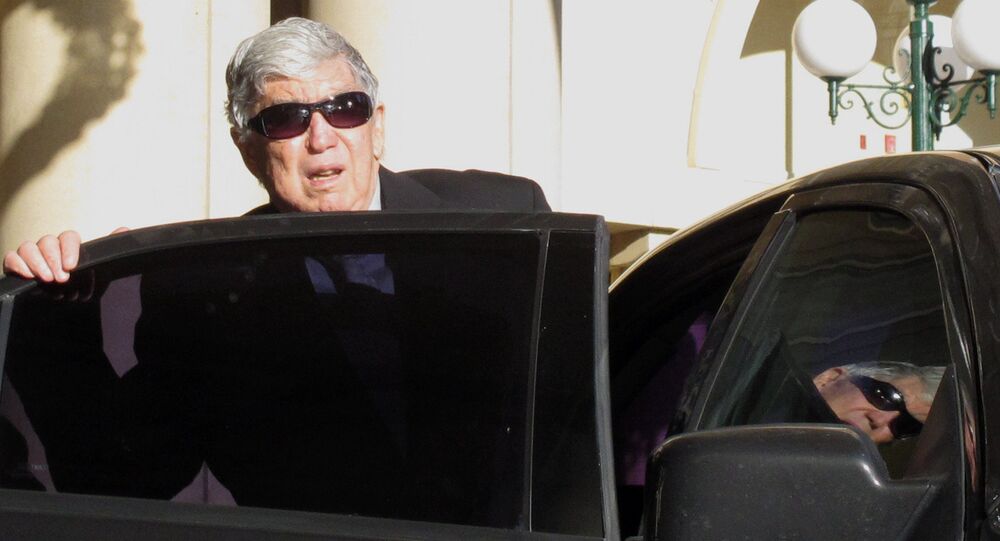 Born to an affluent family in Cuba February 15 1928, Posada studied medicine and chemistry at the University of Havana, where he was a contemporary of Fidel Castro.

While Castro was a figure of significance in student politics at the time, Posada could have had no idea that in 1959, the bearded radical would, as head of the revolutionary 26th of July Movement, overthrow Cuba's authoritarian, US-backed government, led by President Fulgencio Batista.

© AP Photo / Ramon Espinosa
A soldier carries a life-size cut out of Cuba's late leader Fidel Castro during the May Day parade at Revolution Square in Havana, Cuba, Monday, May 1, 2017.
Once that historic event came to pass however, Posada would become Castro's nemesis, engaging in a blood-spatted, half-century long international quest to overthrow him by any means possible after taking power. It would be a crusade funded, materially supported and at times directed by the US government, and the CIA.

In the years immediately following the Cuban Revolution, 250,000 Cubans — primarily upper and middle-class individuals and families financially impacted by Castro's popular redistributive policies. Among them was Posada, who in 1961 relocated to the US.

Despite his family supporting the revolution and remaining in the country — his sister subsequently rose to the rank of Colonel in the Cuban army — Posada began plotting the downfall of Castro's new government. The new arrival was not unnoticed by the Washington, who sought to recruit disaffected Cuban exiles to their clandestine efforts to suppress the revolution.

Posada would end up playing a leading role in planning the disastrous Bay of Pigs invasion. On April 20 1961, five merchant ships carrying 1,400 US-trained and armed Cuban exiles arrived at an inlet on the southern coast of Cuba, aiming to stage a counter-revolution. It was not to be — two of the ships were quickly sunk, including the vessel carrying most of the supplies. Two CIA planes attempting to provide air-cover were also shot down. Within 72 hours all invaders had been killed, wounded or surrendered.

After the failure, Posada was trained by US intelligence in sabotage and the use of explosives, and worked closely with the CIA in Miami, being a major participant in the infamous Operation 40. The group was an unofficial 'hit squad', carrying out assassinations and terror attacks across the mainland US, Mexico, the Caribbean and Central America. He would remain an official CIA employee until 1967.

In 1968, he relocated to Venezuela, becoming a naturalized citizen. CIA files indicate his troublemaking in the hemisphere continued unabated, with involvement in bombing campaigns, overthrows of leaders troublesome to US financial interests in the region, and much more.

On October 6 1976, Air Cubana Flight 455 on its way from Barbados to Jamaica was bombed shortly after takeoff, killing all 73 people on board, including the Cuban national fencing team — many of whom were mere teenagers.

Police in Trinidad arrested two Venezuelans — Herman Ricardo and Freddy Lugo — both of whom were connected with Posada, and worked for his ICI security agency. The pair admitted planting two bombs on the plane, in a plot mapped out by Posada and his fellow Cuban exile militant Orlando Bosch.

Documents declassified in 2006 indicate the CIA was well aware of the attack in advance, and Posada's leading role in its planning and execution.

Posada was subsequently arrested too — in his possession was a map of Washington DC, which documented the daily route to work of Orlando Letelier, former Chilean Foreign Minister and refugee from the military dictatorship of General Augusto Pinochet, who'd been assassinated in a car bomb attack September 21 1976.

© AP Photo / Esteban Felix
A man takes part in a demonstration commemorating the 44nd anniversary of Chile's 1973 military coup, in Santiago, Chile, Sunday, Sept. 10, 2017.
The militant would spend several years in prison, before escaping in 1985 — he disguised himself as a priest, and the Cuban American National Foundation, a group with close ties to the Ronald Reagan administration, paid out sizeable bribes to local authorities. Posada then resettled in El Salvador, where he once again became involved in White House-directed operations in the region.

Perhaps most significantly, during this time he was assigned as deputy to CIA operative Felix Rodriguez, who'd overseen the capture and execution of Ernesto "Che" Guevara in Bolivia in 1967. The pair's primary job was to coordinate drops of military supplies to the Contras, a violent rebel group funded by the Reagan administration which opposed the progressive Sandinista government in Nicaragua.

US financial and material support for the Contras had been banned by in 1985, due to the group's concerted campaign of terrorism against civilians — which included targeting healthcare clinics and aid workers for assassination, kidnap, torture, execution, rape, theft and arson. However, the Reagan administration placed Lieutenant Colonel Oliver North in charge of a secret operation to maintain the transfer of US arms and money to the Contras.

© CC0
President Ronald Reagan goes over his remarks on the Iran-Contra Affair in the Oval Office.
CIA documents demonstrate Posada played a lead role in managing supply flights from the Salvadoran base of Ilopango to the Contra rebels at the border — and these planes were used by the Contras to boost their war budget, by loading them with cocaine that was then flown to mainland America.

After leaving El Salvador, Posada settled in Honduras, where FBI agents allege he was responsible for 41 bombings in the country. He also used his new home as a base of operations for numerous attacks in Cuba, which included the notorious 1997 tourist bombings.

The sextet of incendiary attacks across the island was intended to deter rising tourism — several were killed, including Italian-born Canadian national Fabio di Celmo, and many were wounded.

In reaction to di Celmo's death, Posada told a journalist the next year "the Italian was in the wrong place at the wrong time, but I sleep like a baby." His primary regret, seemingly was the reluctance of US news organisations to report the strikes, adding "if there is no publicity, the job is useless."

© AFP 2020 / YAMIL LAGE
An American Airlines plane arrives at Jose Marti International Airport becoming the first Miami-Havana commercial flight in 50 years, coinciding with the beginning of the tributes to late Cuban leader Fidel Castro, on November 28, 2016 in Havana
On November 17 2000, Posada's luck seemingly ran out — he was caught with 200 pounds of explosives in Panama City and arrested. Investigators suspected he'd been planning the assassination of Fidel Castro, visiting the country for the first time since 1959. He spent several years in prison for the plot — but in August 2004, he was pardoned by outgoing Panamanian President Mireya Moscoso.

Moscoso, who'd been close to the George W. Bush administration, denied she'd been pressured by US officials to release him — but subsequently, the tape of an incriminating phone call made by the President to the US Ambassador came to light.

"Ambassador, good morning. This is the President to inform you the four Cubans were pardoned last night and have left the country. Three are on their way to Miami and the other, well, in an unknown direction. Goodbye. A hug."

Posada resurfaced in the US in 2005 — within weeks, he was arrested due to international pressure on the Bush administration to hold him to the same standard as other accused terrorists. However, officials refused to turn him over to Venezuela or Cuba, or try him on terrorism charges — he did however end up in court on the comparatively trifling charge of lying to immigration officials. He was acquitted of all charges in 2011, and lived out his days in Miami, financially supported by the city's large Cuban exile population.

Bay of Pigs Invasion 50 years ago