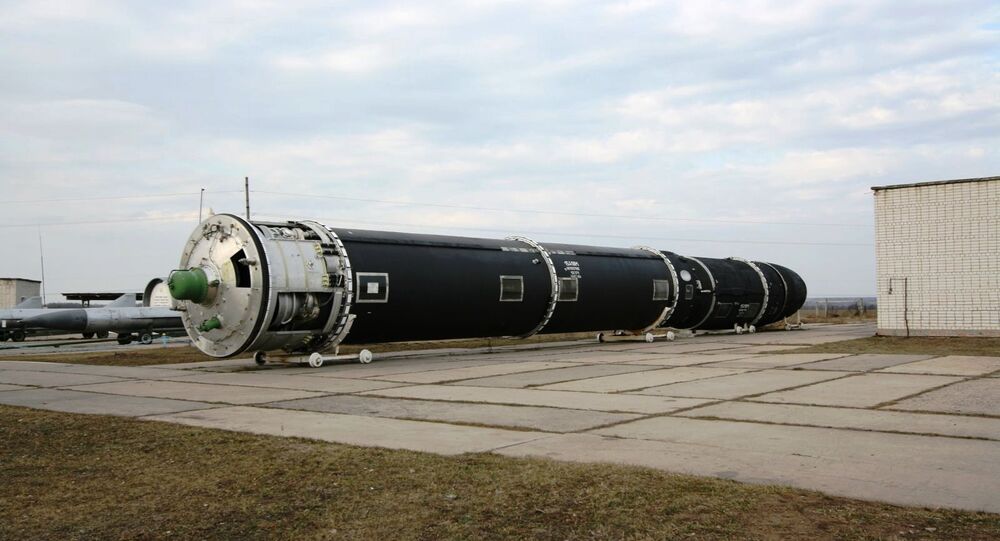 A Sputnik source in the Russian space industry has confirmed that it is considering the option of reviving a program of peaceful launches of Voevoda missiles to deliver cargo into orbit around the Earth. Sputnik has gathered some facts about the characteristics of the carrier rocket based on the Voevoda missile.

After the START-1 treaty was signed, the Russian government began looking into possibilities of utilizing the R-36 Voevoda (NATO reporting name SS-18 Satan) missiles, which were not permitted under the restrictions imposed by the treaty. As a result of the project Dnepr, many of them were converted to deploy commercial satellites to low Earth orbit. The Russian government terminated the program in 2015 due to worsening relations with Ukraine, which supplied Zenit boosters for the rockets, but now is considering a revival of the program.

Originally the SS-18 Satan was famous for its ability to carry MIRV warheads that could separate into 10 750 kiloton warheads with a large number of protective decoys. After the first successful peaceful launch of a converted Satan, engineers came up with the idea to deploy several satellites in a manner similar to the how a MIRV would deploy its warheads. In June 2014, one such missile successfully deployed 33 space modules from 17 countries. This innovation allowed reducing the deployment costs and thus made the missile an attractive option for the commercial launches.

Contrary to other derivatives of the SS-18 rocket, such as Tsyklon-2 and 3, a widely used Dnepr modification had a payload almost twice as large. It could carry up to 3,200 kg to low Earth orbit (the closest related US carrier rocket in the same class is the Antares, which can deploy roughly 4,000 kg).

Out of 22 launches of the converted Satan missiles, only one failed. By contrast, the Antares series carriers have an 83% success rate. Along with a significant supply of unconverted SS-18s (around 150 units) this makes the Satan an enticing option for creating a commercial carrier rocket on its basis.

Although such an option doesn't seem very peaceful, the threat that asteroids pose to Earth is still quite real. So, Sabit Saitgarayev, a senior researcher at the State Rocket Design Center, suggested in 2013 that the Satans could be converted for use against asteroids up to 100 meters in diameter that might endanger Earth. Considering the power of explosion that the Chelyabinsk asteroid caused in Russia in 2013, such a suggestion doesn't really sound like overkill.