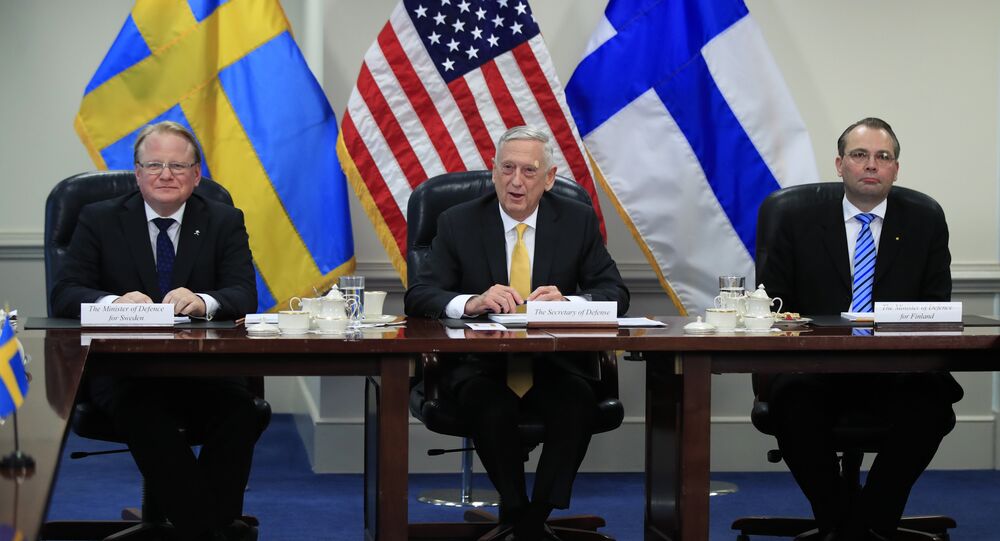 Finns Sulk Over US Preference for Sweden Amid Tripartite Defense Agreement

Although not legally-binding, a recent trilateral agreement between Sweden, Finland and the US has been hailed as "historic" in Sweden. At the same time, it left a bitter aftertaste in Finland.

Finland and Sweden, the only remaining non-NATO members in Scandinavia, have signed an agreement on closer and deeper military cooperation in Washington. The agreement includes, among other things, an emphasis on joint drills and submarine hunting, the daily newspaper Aftonbladet reported.

The agreement marks a departure from bilateral US-Swedish and US-Finnish arrangements in favor or a tripartite cooperation.

"What we want to achieve is long-term stability in our part of Europe," Swedish Defense Minister Peter Hultqvist said, after meeting his colleagues Jussi Niinistö and James Mattis. Hultqvist also stressed that both Finland and Sweden have been deepening their defense cooperation with the US in all branches of arms, which is why establishing more in-depth collaboration was "only natural."

​Hultqvist pointed out that "increasingly poor security" provided a backdrop for increased cooperation.

"We have not singled out any particular country in this way. We only note that over time, the security policy situation in our part of Europe has deteriorated," Hultqvist said. At the same time, both Hultqvist and Niinistö were at pains to stress that the agreement shouldn't be seen as a provocation against Russia.

Lastly, Hultqvist ventured that the cooperation agreement should be seen as a signal to the outer world, stressing that the "Transatlantic link" was crucial for keeping balance in Europe in terms of security.

​The Swedish daily newspaper Dagens Nyheter didn't hold back praise, dubbing the agreement "historic," while stressing that it was not legally binding. In Finland, however, reactions have been less enthusiastic.

"US representatives have on several occasions signaled that Sweden won't be abandoned in case of a military conflict. To Finland, no similar guarantees have been given in public," wrote Ingemo Lindroos, a political reporter at national broadcaster Yle.

Lindroos noted that Sweden was much faster than Finland to initiate military cooperation with the US. She also cited former Defense Minister and NATO supporter Carl Haglund's bewilderment over why Sweden "wants to sleep with the US" while it openly refuses to join NATO.

Lindroos also emphasized that Sweden was given all kinds of assurance already during the Obama administration, with former Vice President Joe Biden calling Sweden "inviolable territory." Later, Defense Minister James Mattis came up with an even clearer message, calling Sweden a "friend and ally," which she interpreted as Stockholm enjoying secret US security guarantees dating back to the Cold War era. According to Lindroos, this contrasts starkly with Mattis's laconic statements about Finnish-US cooperation.

Bilateral cooperation agreements between the US and the Nordic countries were concluded in 2016. When Sweden carried out the major defense exercise Aurora in September 2017, its largest drill in decades, the US was the largest foreign participant. The US has also participated in a number of drills in Finland in recent years.