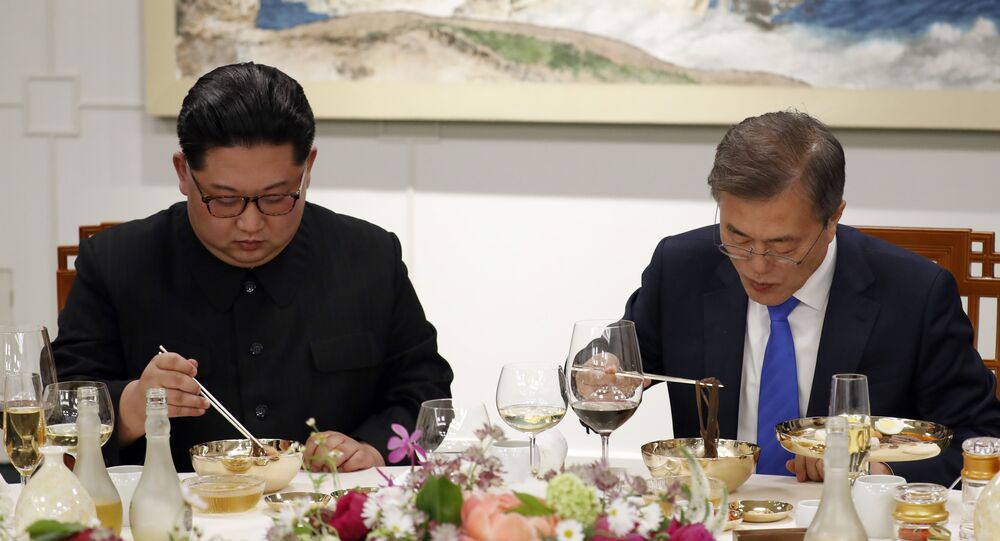 Buzzkill: DPRK Says US Is Ruining the Mood of Detente Ahead of Historic Summit

It’s less than a month before US President Donald Trump and People’s Democratic Republic of Korea (DPRK) leader Kim Jong Un meet for the first time, and Pyongyang is continuing its scathing assessment of Washington’s diplomatic overtures.

Criticizing what it describes as "misleading" US claims that the purported Trump policies of heavy political pressure and crushing economic sanctions are the reason the DPRK expressed a willingness to negotiate, Pyongyang on Sunday decried Washington's "dangerous attempt" to bring to a halt a historic detente on the Korean Peninsula.

Quoting a Foreign Ministry spokesperson, Pyongyang's state-run news outlet Korean Central News Agency (KCNA) warned that "The US is deliberately provoking the DPRK at the time when the situation on the Korean Peninsula is moving toward peace and reconciliation," cited by the BBC.

After meeting with South Korean President Moon Jae-in at a summit late last month, Kim stated that his country would move to improve North-South ties and also alluded to a willingness to discuss denuclearization on the peninsula, although precise details regarding the potential shift are few on the ground.

Senior officials in the US — alongside the often bellicose Trump — have consistently taken credit for reversing what was just last year an extremely tense situation, as Pyongyang conducted several nuclear detonations and launched multiple ballistic missile tests.

In 2017, Kim was trading schoolboy insults with Trump, who gave as good as he got, at the same — often childish — level of discourse. Now, to stem accusations of weakness, Pyongyang is asserting that Kim himself is the primary driver of current negotiations.

In comments reported by KCNA on Sunday, the DPRK Foreign Ministry spokesperson admonished the US to remember that a willingness to negotiate is not a sign of weakness.

Kim and Trump are projected to meet later this month or in early June, according to reports.

Seoul Announces End to Broadcasts Against Pyongyang at Demarcation Line