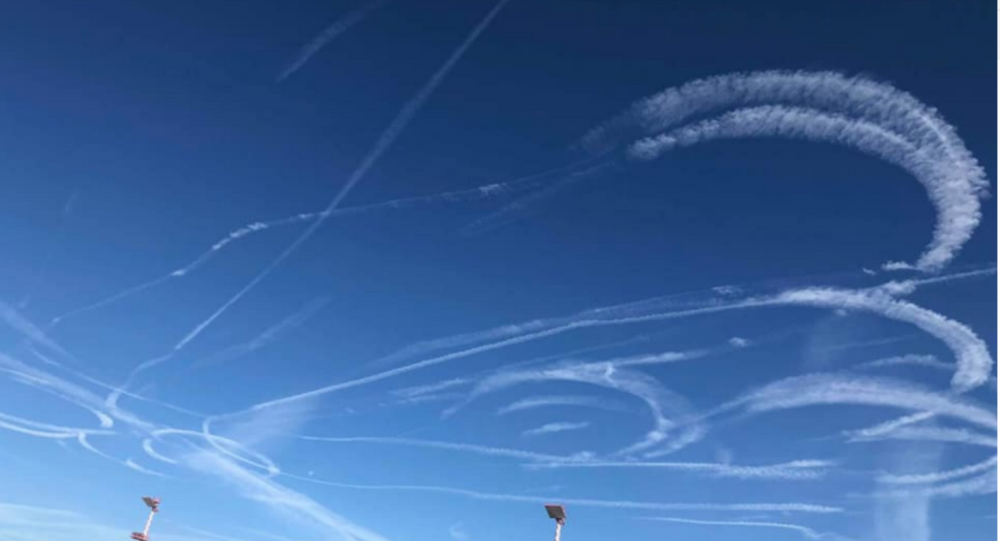 Contrail loops resembling a penis were recently spotted in the sky over the United States’ Ramstein Air Force Base in southwestern Germany, causing people to question whether the phallic-looking pattern was created intentionally by military aircraft or just an innocent mistake.

Photos of the "sky penis" were posted on April 27 on an unofficial US Air Force Facebook page. The post had been shared almost 500 times by Monday.

A spokesperson for the 52nd Fighter Wing told Task & Purpose on Monday that no abnormal flight patterns were flown over Ramstein when the photos were taken.

"The pilots conducted their normal flight patterns, which are based on planned tactics frequently involving circles and straight lines," Air Force Captain Andrea Valencia said in a recent email to the news site.

"The weather permitted those contrails to be visible from the ground and simply showed the patterns that our pilots do on a day-to-day basis. The contrails were not intended to signal anything to anyone on the ground, the pattern and multitude was not an intentional act," Valencia added.

This incident follows a similar situation in which two US Navy aviators faced disciplinary action for scribbling a large sky penis above Okanogan County, Washington, on November 16, 2017.

"When they came down, the aviators were apologetic," US Navy spokesman Commander Ron Flanders told the Union-Tribune in November.

"The aviators admitted that they had done it after it occurred. When they appeared before the [Field Naval Aviator Evaluation Board] they were contrite. They realized that this was an embarrassment to naval aviation and the entire Navy," Flanders added.

​"The Navy's artwork was much more crisp though. I give this a 6/10. Good attempt," one user wrote.

"That's why the Air Force has pilots and the Navy has aviators," another user added.