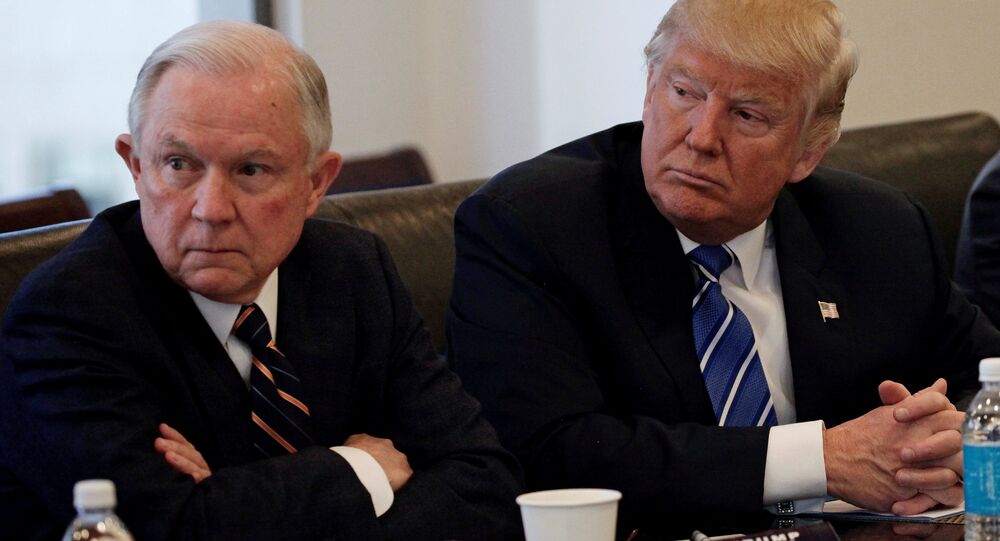 Terry J. Albury faces a likely sentence of between 37 and 57 months under his plea agreement, but the punishment will ultimately be at the discretion of US District Judge Wilhelmina Wright, who did not set a sentencing date. In court, Albury said he knew what he was doing was illegal, but felt FBI investigations treated minority communities with "suspicion" and "disrespect."

Charging documents filed March 27 didn't name the news organization or reporters, but the date of the classified documents and their subject matter — which related to assessing informants and recruiting them by identifying "motivations and vulnerabilities" — corresponded with a story posted by The Intercept on January 31 2017. The article related how the FBI's online activities were so pervasive bureau agents sometimes ended up investigating their own operatives.

© AFP 2021 / Mandel Ngan
A crest of the Federal Bureau of Investigation is seen 03 August 2007 inside the J. Edgar Hoover FBI Building in Washington, DC.
© AP Photo / Carolyn Kaster
WikiLeaks Publishes Docs, Source Code of CIA Secret Document Tagging Program as Part of 'Vault 7'
Albury, who began working for the FBI as an intern in 2000 and became a special agent in 2005, is said to have accessed at least two-thirds of the 27 classified documents The Intercept posted online. Some had been photographed from a computer screen — at his trial, the prosecution provided surveillance footage of Alburyphotographing his computer screen on three separate occassions in 2017.

After the hearing, Albury's attorneys, JaneAnne Murray and Joshua Dratel, issued a statement saying he'd acted out of "conscience", as he believed the FBI predominantly reflected a white male culture and was troubled by racism in the agency. Many of the FBI's counterterrorism investigations in Minnesota are said to have focused primarily on the states' large Somali-American community.

"The situation became even more acute for him when, having previously served a tour for the FBI in Iraq, he was assigned to the counterterrorism squad and was required first-hand to implement FBI investigation directives that profiled and intimidated minority communities in Minnesota and other locations in which Terry served," the pair wrote.

The Trump administration has made prosecuting government employees who leak sensitive information to the media a high priority, with Attorney General Jeff Sessions claiming in 2017 the Justice Department had more than tripled the number of active leak investigations since President Barack Obama left office, and the FBI had created a new counterintelligence unit to focus on such cases.

© AP Photo / Alex Brandon
Attorney General Jeff Sessions arrives on Capitol Hill in Washington, Tuesday, June 13, 2017, to testify before the Senate Intelligence Committee hearing about his role in the firing of James Comey, his Russian contacts during the campaign and his decision to recuse from an investigation into possible ties between Moscow and associates of President Donald Trump.
If Sessions' suggestions are even vaguely accurate, the amount of ongoing leak investigations currently in progress is likely to be staggering. Under the Obama administration, more individuals were investigated and prosecuted for leaks than under all other US presidents combined. This included Chelsea Manning, who was held in solitary confinement for nearly one year prior to her military trial, prompting condemnation from the UN special rapporteur on torture. The President also implemented the ‘Insider Threat' program, which required federal employees to report on coworkers if they mooted leaking classified information, or if they suspected a coworker may do.

Journalists were also targeted by Obama — investigators attempted to subpoena phone records of Associated Press journalists, threatened to jail an investigative reporter for The New York Times, and named a Fox News reporter a co-conspirator in a leak case. In 2014, Texan journalist Barrett Brown, who was investigating private defense contractors was federally prosecuted, was charged for sharing a hyperlink containing hacked Stratfor information that was already in the public domain.

In January 2015, he was sentenced to 63 months in federal prison for the crimes of accessory after the fact and obstruction of justice, and fined US$890,250. It has been suggested prosecutors made false allegations to increase the length of his sentence, as the government considered him particularly dangerous.

Such was the Obama administration's war on whistleblowers, in 2015 the US almost fell out of the top 50 in Reporter Without Borders' annual press freedom index. The country had slid 29 spots since Obama took office.

This unprecedented crackdown came despite Obama promising on his first day in the White House to launch "a new era of open government."

"The Government should not keep information confidential merely because public officials might be embarrassed by disclosure, because errors and failures might be revealed, or because of speculative or abstract fears," he said in a January 21 2009 memorandum.

‘A Conceptual Error’ - Why the Pentagon Confuses Spies With Whistleblowers