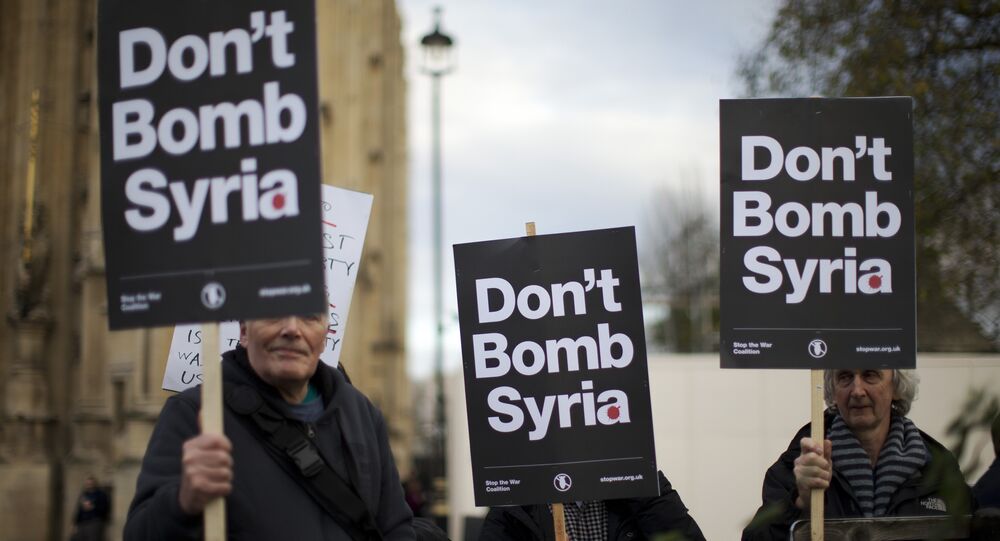 The April 14 US, UK and French strikes on Syria were widely applauded in the Western mainstream, with many pundits suggesting the attacks represented an end to Western inaction in Syria.

US-led attempts to overthrow governments in Syria has a long, questionable history. In fact, Syria was the first country in the post-war period to be targeted by US planners for regime change.

Miles Copeland, then-CIA agent (and father of The Police's drummer Andy), documented these efforts in his 1968 autobiography, The Game of Nations. At the conclusion of World War II, with European empires crumbling and independent nationalism resurgent, the US government put together a consulting team — comprised of diplomats, OSS agents, advertising executives and political theorists — to determine how the world could continue to be managed in the interests of Western powers.  The group decided to use Syria, where elections were due in 1947, as a laboratory.

© AP Photo / Hassan Ammar
The Damascus sky lights up missile fire as the U.S. launches an attack on Syria targeting different parts of the capital early Saturday, April 14, 2018
The approach was comparatively subtle and unbloody — US oil companies put up posters across the country telling Syrians to "vote for the candidate of your choice", influential local elements — such as police forces, landowners and employers — were paid to keep out of proceedings, and taxis were hired at American expense to drive citizens to polling stations for free.

However, Copeland claims the plan failed when landowners et al sought to influence voters despite their inducements, and the well-funded taxi-drivers sold themselves to different candidates, only taking certain voters to the booths. In any event, the Western voting machines bussed in for the occasion weren't trusted, as they were viewed as "imperialist technology".

Whatever the truth of the matter, the US wasn't happy when its preferred candidates failed, so a military coup — the first American foray into the practice — was arranged for 1949. US officials met with Husni al-Za'im, head of the Syrian army, suggesting he stage a coup d'etat. While the Americans were making preparations for al-Za'im's coup, Copeland recalls how one member of the contingent, a young man named Deane Hinton, issued a stirring warning to the group.

"I want to go on record as saying this is the stupidest, most irresponsible action a diplomatic mission like ours could get itself involved in, and we've started a series of these things that will never end," Hinton said.

For his foresight, Hinton was removed from the group and never worked in US politics again. The coup duly transpired in March 1949, without hitch. However, Za'im's brutal rule quickly unravelled, and he was killed by a quintet of subordinates a mere five months later, who then staged their own bloody coup. This was then followed by a series of military coups throughout the 1950s, at least two of which were US-organized — the 1956 Operation Straggle, and 1957 Operation Wappen.

When the latter plan failed, British and American intelligence began sketching another plot, in which  three Syrian officials in Damascus — Abdel Hamid al-Sarraj, head of military intelligence, Afif al-Bizri, army chief of staff, and Khalid Bakdash, leader of the Syrian Communist Party — would all be assassinated, and the government of the day blamed for the killings. It was hoped the spree would precipitate a wave of insurrectionary violence by the victims' supporters.

Unacceptable in the 80s

In 2017, a number of historical CIA documents relating to Syria were declassified. One particularly damning file from 1986 documented a plot to overthrow the government, by provoking sectarian tensions. Many of its suggestions and observations resonate to the present day — in particular the authors' conclusion US interests would be "best served by a Sunni regime controlled by business-oriented moderates." Such a governmental structure would precipitate a "strong need for Western aid and investment" and ensure "strong ties" to Western governments.

"Although we judge that fear of reprisals and organizational problems make a second Sunni challenge unlikely, an excessive government reaction to minor outbreaks of Sunni dissidence might trigger large-scale unrest. In most instances the regime would have the resources to crush a Sunni opposition movement, but we believe widespread violence among the populace could stimulate large numbers of Sunni officers and conscripts to desert or mutiny, setting the stage for civil war," the document suggests.

© AP Photo / Hassan Ammar
A Syrian government supporter holds up a Syrian national flag as he chants slogans against U.S. President Trump during demonstrations following a wave of U.S., British and French military strikes to punish President Bashar Assad for suspected chemical attack against civilians, in Damascus, Syria, Saturday, April 14, 2018
While noting Sunni dissidence in the country had been "minimal" since Assad cracked down on the Muslim Brotherhood in the early 1980s, "deep-seated tensions" lingered, "keeping alive the potential for minor incidents to grow into major flareups of communal violence." Excessive government force in response to such disturbances would serve to facilitate "even larger protests by other Sunni groups."

"Mistaking new protests as a resurgence of the Muslim Brotherhood, the government would step up its use of force and launch violent attacks on a broad spectrum of Sunni community leaders as well as on those engaged in protests. Regime efforts to restore order would founder if government violence against protestors inspired broad-based communal violence between Alawis and Sunnis. A general campaign of Alawi violence against Sunnis might push even moderate Sunnis to join the opposition" the document continues.

It's uncertain whether American plotting to bring down the government of Syria continued in the 1990s, but the September 11 attacks certainly reinvigorated such efforts. In 2007, General Wesley Clark recalled an incendiary conversation he had not long after that tragedy.

"About ten days after 9/11, I went through the Pentagon and saw [Donald] Rumsfeld and [Paul] Wolfowitz. I went downstairs just to say hello to some of the people on the Joint Staff who used to work for me, and one of the generals called me in. He said, "Sir, you've got to come in and talk to me a second…we've made the decision we're going to war with Iraq." This was on or about the 20th of September…so I came back to see him a few weeks later, and by that time we were bombing in Afghanistan. I said, "Are we still going to war with Iraq?" And he said, "Oh, it's worse than that." He reached over on his desk. He picked up a piece of paper. And he said, "I just got this down from upstairs" — meaning the Secretary of Defense's office — "today….this is a memo that describes how we're going to take out seven countries in five years, starting with Iraq, and then Syria, Lebanon, Libya, Somalia, Sudan and, finishing off, Iran," Clark said.

Just over five years later, an internal US government cable — published in 2010 by WikiLeaks — discussed how Washington was trying to identify the Syrian government's weak spots, which could then be used to undermine Assad's rule.

"Bashar's weaknesses are in how he chooses to react to looming issues, both perceived and real, such as the conflict between economic reform steps and entrenched, corrupt forces, the Kurdish question, and the potential threat to the regime from the increasing presence of transiting Islamist extremists. This cable summarizes our assessment of these vulnerabilities and suggests there may be actions, statements, and signals the USG can send that will improve the likelihood of such opportunities arising," wrote William Roebuck, an official at the US embassy in Damascus, December 2006.

From there, the cable returns to a familiar theme — provoking action by opposition elements in Syria, and an overreaction from Assad in response.

It wasn't merely Washington who was planning Assad's removal long before the 2011 protests, however — London also wanted in on the action. Roland Dumas, former French Foreign Minister, claimed in 2013 he was made aware of impending violence in Syria in 2009.

"I was in England two years before the violence in Syria on other business. I met with top British officials, who confessed to me that they were preparing something in Syria. Britain was organizing an invasion of rebels into Syria. They even asked me, although I was no longer minister for foreign affairs, if I would like to participate. This operation goes way back. It was prepared, preconceived and planned," Dumas alleges.