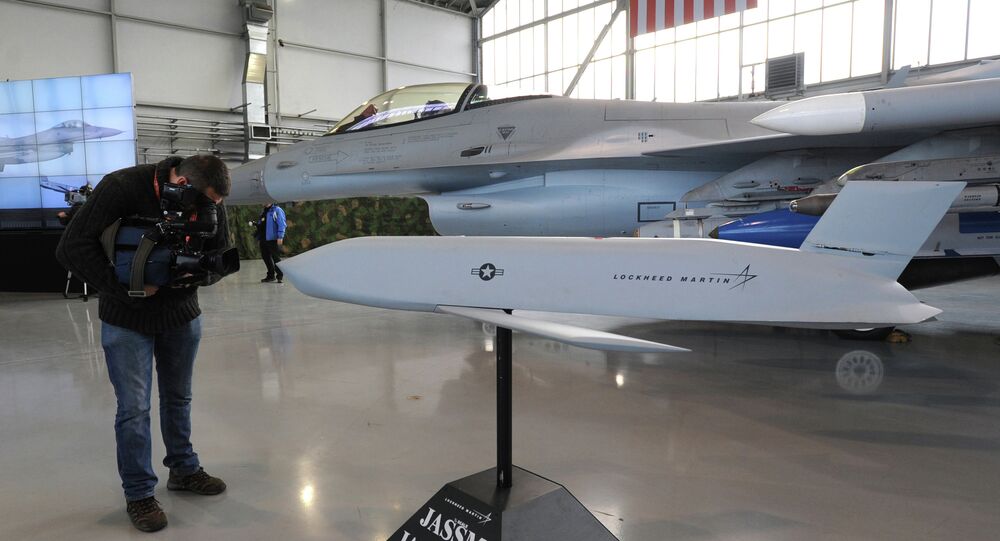 US Air Force Centcom has confirmed that in addition to Tomahawks, the US fired off 19 JASSM standoff air-launched cruise missiles into Syria on Saturday. The deployment marked the first use of the $1.75 million apiece weapon, previously known for its development and reliability problems.

We have this exclusive photo that is said to show the B-1B used in the strikes all loaded up with JASSMs as we suspected. This sortie marked the first combat use of this weapon. We continue to update our post with more information:https://t.co/2wyE643k3m pic.twitter.com/Y13kCMvT6b

The Pentagon has not yet confirmed where the two B-1Bs involved in Saturday's attack were flying from, although Air Force media posted a video showed B-1B bombers arriving at the Al-Uldeid US airbase in Qatar, exactly one week before the alleged Douma chemical attack which Washington and its allies used as the pretext for today's missile attack.

Saturday's strike was the first-ever use of the JASSAM, a missile developed by Lockheed Martin which suffered a series of development problems since work on the weapon began in 1995. The $3 billion program was plagued with launch failures, poor performance and reliability issues. In 2007, the Pentagon was forced to lay out $68 million in additional funds to rectify these problems. Lockheed Martin has delivered a total of 2,000 JASSMs and JASSM-ERs to the US military, and has sold the missile to Australia, Finland and Poland.

The 'Extended Range' variant of the JASSM has 453 kg of explosives and a range of 1,000 km, allowing it to be launched from well outside the zone of enemy air defenses. The weapon was approved for combat use in February 2018.

A Russian Defense Ministry analysis from shortly after the strikes Saturday morning found that among the US, French and British cruise missiles launched, 71 were shot down by Syrian air defenses.

The missiles that did make it through were reported to have struck near population centers, as well as a university in Damascus.

#SyriaStrike live from my aunt’s house. I thought that they weren’t supposed to be close to where civilians live.
(Via: @ABaranbo) pic.twitter.com/Oz9dhMBRHl

So basically the "Scientific research facility" the US bombed was a university. #Syria #Syristrike #Damascus https://t.co/N3GJ6BXi7J