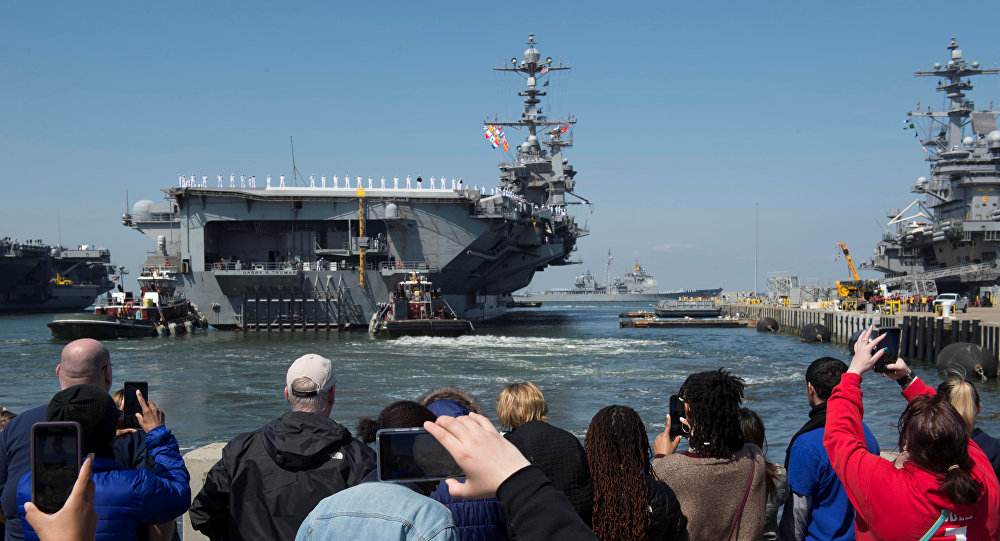 Promising to decide on his response to the alleged chemical weapons attack in Syria's Douma within 48 hours, President Donald Trump then urged Russia to get ready for the launch of "new" US missiles on Syria. Although the deadline has already expired, the world continues to brace itself for possible repercussions from Trump's pledge.

The video of the aircraft carrier USS Harry S. Truman deploying to the Middle East has emerged on YouTube.

The footage specifically showed relatives of the carrier's crewmembers waving goodbye to them as the vehicle prepares to set sail for a new mission.

Earlier, the US Navy announced that the USS Harry S. Truman Carrier Strike Group, currently stationed in Norfolk, Virginia, will be deployed to the Middle East.

The group's redeployment came shortly after Washington accused the Syrian government of using chemical weapons in Douma that allegedly led to civilian casualties.

President Donald Trump blamed Russia and Iran for helping Syrian President Bashar Assad and promised to decide on his response to the alleged chemical weapons attack in Douma within 48 hours.

Later on his Twitter page, Trump threatened to launch "nice and new" missiles at Syria. In a follow-up tweet, he claimed that the Washington-Moscow relations were worse than during the Cold War.

© AFP 2019 / JOSEPH EID
US Choppers Allegedly Evacuate Daesh Militants Amid Trump's Vow to Attack Syria
Damascus reportedly said that Washington's chemical weapons attack allegations were nothing but a provocation by the terrorist group Jaish al-Islam and other militants to prevent the advance of the Syrian government's army.

The Russian Defense Ministry has, meanwhile, reported that an analysis of the soil in Douma, which was taken right after the alleged chemical weapons attack, has revealed the absence of nerve agents and poisonous substances containing chlorine in the area.