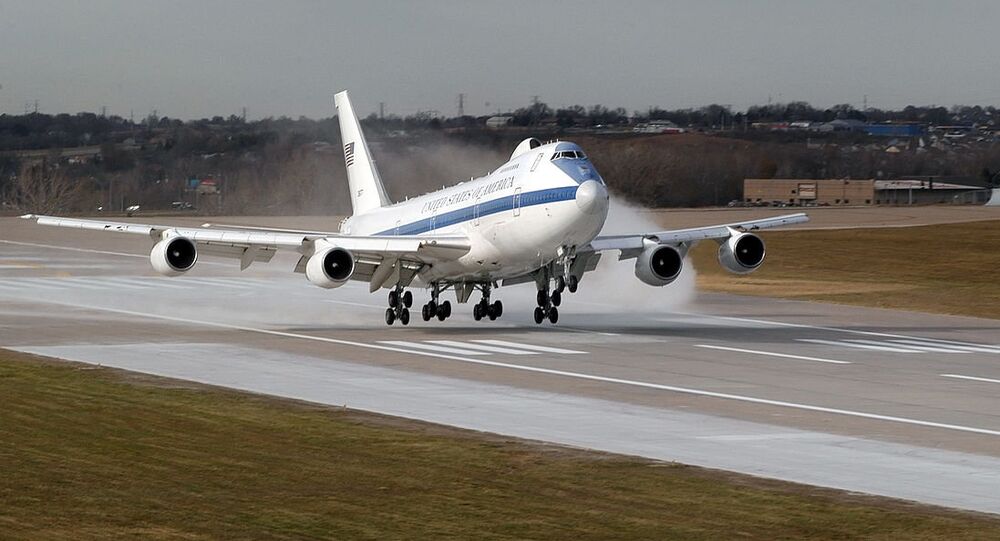 Is It Today? US Doomsday Plane Takes Off Amid Tensions in Syria

Earlier US President Trump threatened on his Twitter page to strike Syria with “nice and new and smart” missiles over the alleged use of chemical weapons in Douma. Russia has already warned Washington against such a move.

The CivMilAir Twitter account, which monitors airplane movements, posted information that the Boeing E-4B Nightwatch, commonly known as the "Doomsday plane," took off from the Wright-Patterson airbase near Deiton on April 11 in 14:09 and flew towards Springfield, Illinois. What is curious about it is the fact that it left the airbase minutes after US President Donald Trump made his threat to launch a missile attack on Syria.

The Boeing E-4B is one of ten National Emergency Airborne Command Posts (NEACP) that would be used in case something were to happen to the main command posts on the ground to coordinate US military efforts. There are currently 6 functional E-4Bs that are ready around the clock to receive the command to lift off. During wartime only the president, the secretary of defense and members of the Joint Chiefs of Staff can go aboard the aircraft.

Washington accuses Damascus of being behind a chemical attack in Douma that allegedly resulted in civilian casualties. The Syrian government denies the accusations. The Russian defense ministry has warned several times that terrorist forces may perform provocations using chemical weapons in order to create a pretext for military intervention by the US coalition.

Russian chemical experts were sent to the site of the alleged chemical attack and found no traces indicative of the use of chemical weapons.  They also failed to find any victims of chemical poisoning in nearby hospitals. Moscow and Damascus have invited OPCW experts to Douma to determine whether or not chemical weapons were used.

The US Navy announced April 10 that the USS Harry S. Truman carrier strike group will be redeployed to the Mediterranean and the Middle East region, without specifying its tasks and terms of deployment. The Russian defense ministry warned the US against conducting strikes on Syrian territory and reminded that the Russian military is still present in the country and will react accordingly.