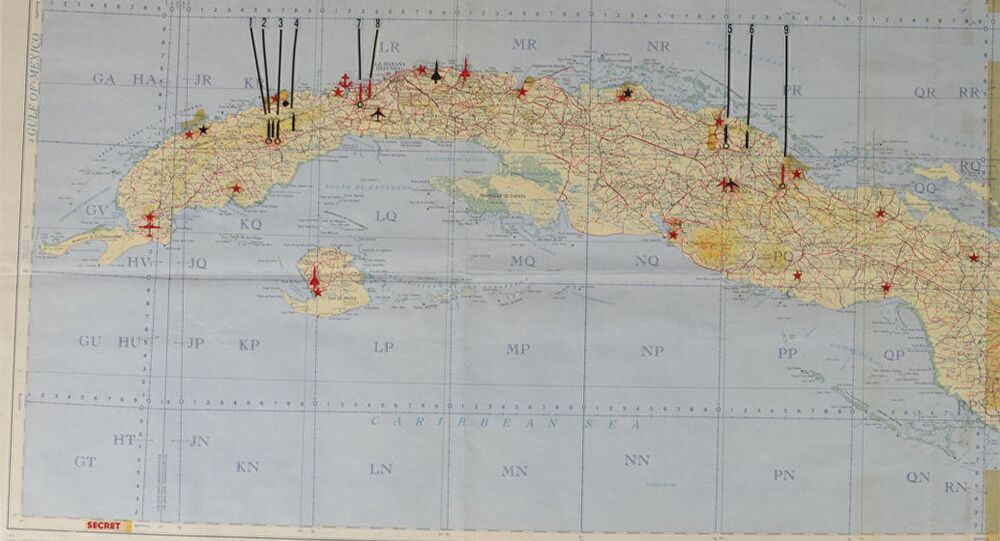 The map, an artifact from one of the most dangerous days in human history, has been put on sale by a Boston-based auction company.

Citing Defense Secretary Robert McNamara, RR Auction Company, the map's seller, says that President Kennedy "pored over this map before deciding to delay the attack." Kennedy gave the map to McNamara after the crisis passed, calling it the "victory map."

© RR Auction
Legend of Soviet units in Cuba, according to US intel.
© CC0 / Ken Hackman, AAVS/DOOJ
Cuban Missile Crisis: 14 Days When the World Was on the Brink of Nuclear War
October 27, 1962, also known as "Black Saturday," is considered by historians as the most dangerous moment of the Cuban Missile Crisis, and perhaps in human history. On that day, a Soviet SAM shot down a USAF U-2 spy plane. Later, US destroyers dropped depth charges on a Soviet sub, forcing it to either launch its missiles or surface. The sub commander chose the latter. Kennedy met with his advisors three times that day, with the Joint Chiefs of Staff pressing him to launch air strikes against the Soviet targets on the Caribbean Island.

That night, Soviet Ambassador to the United States Anatoly Dobrynin met with Attorney General Robert Kennedy and agreed to a deal under which Moscow would withdraw its Cuba-based missiles in exchange for a US withdrawal of its nuclear weapons from Turkey and a promise not to invade Cuba.

On November 20, 1962, the last Soviet missiles were removed from Cuba. Several months later, Washington withdrew its Jupiter missiles from Turkey.

The Cuban Missile Crisis 55 Years On

Cuban Missile Crisis: 14 Days When the World Was on the Brink of Nuclear War