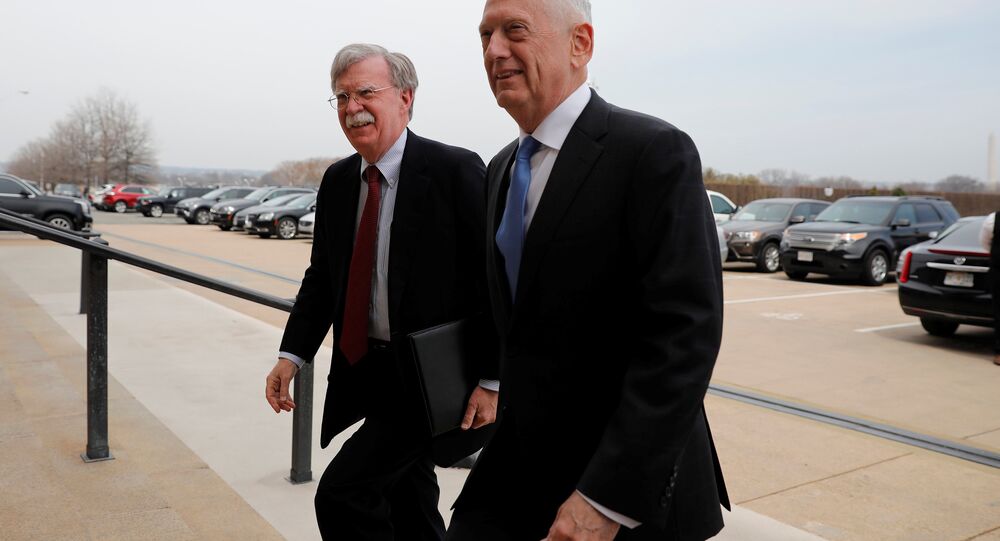 Bolton & Pompeo: Deciphering Trump's Neocon Shift
Fears of increasing friction between the Department of Defense (DoD) and the Trump White House in the wake of neoconservative Bolton's installation as the president's national security adviser have many career military staffers on edge, as the newest cabinet pick — although a stranger to combat — has a long history of avowing a ‘shoot first ask questions later' doctrine.

Current US Secretary of Defense James Mattis, who met with Bolton for the first time on Thursday, stated previously that he had "no reservations, no concerns at all," in working alongside a notorious military hawk who previously resigned as the interim US ambassador to the United Nations during the presidency of George W. Bush when he realized that his official appointment to the position under a democratic-controlled Senate was unlikely.

Mattis was quoted as saying about Bolton: "Last time I checked he's an American. I can work with an American, okay?" cited by The Hill.

Meeting Bolton on the steps of the Pentagon last week, reporters' microphones clearly picked up the general greeting the civilian with the words: "Thank you for coming. It's good to finally meet you. I heard you're actually the devil incarnate."

Mattis's bantering tone was taken as a good sign by DoD insiders although some asserted that the two were oil and water, and would ultimately disagree on most key issues, particularly the response to a nuclear threat posed by the People's Democratic Republic of Korea (DPRK) and several ongoing wars being propagated by the Trump White House in the Middle East.

"I don't think they will get along," an unnamed source cited by The Hill suggested, adding, "I think they'll be at odds."

Bolton, a well-known supporter of conservative causes — including serving on the boards of the increasingly unpopular National Rifle Association (NRA) and the neoconservative Project for the New American Century think tank — is known to hold policy opinions that are directly opposite of those held by Mattis.

A 69-year-old former Reagan appointee, Bolton has many times called for pre-emptive military strikes on the DPRK, including in a February Wall Street Journal op-ed.

Mattis, a lifetime soldier and military commander with wide-ranging experience in US wars around the globe, consistently advocates for diplomacy as the best means of problem solving.

Bolton has a "significant deficiency… he has no personal understanding of how strategic ideas [impact] decisions on the ground," noted retired Army Lt. Col. Daniel Davis, cited by The Hill.

Davis suggested, "I don't think [Bolton] has a very good understanding of what it really means," to attack the DPRK, observing "how it so badly could impact our own interests."

The retired officer pointed out that "Mattis is on record as really emphasizing what [war with the DPRK] would cost."