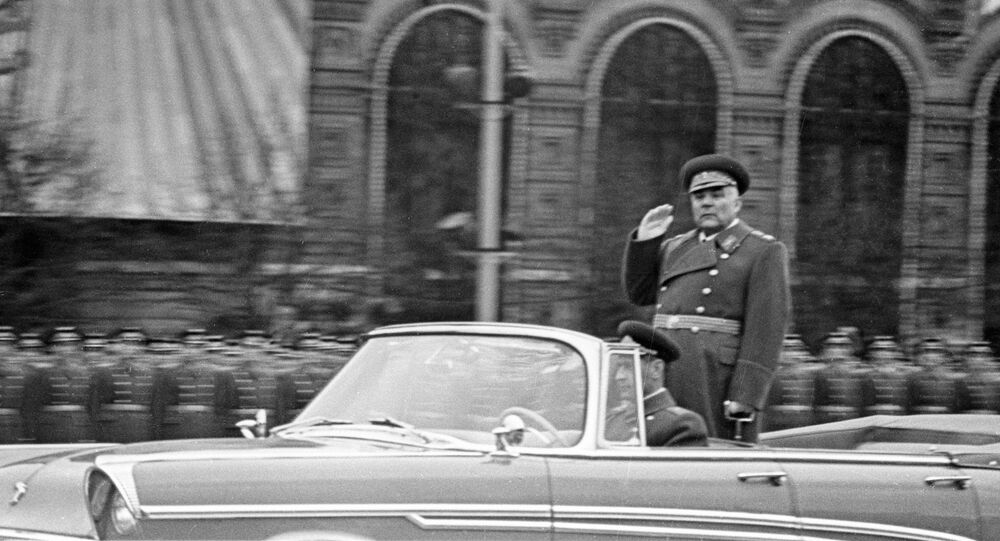 Natalya Malinovskaya, daughter of Soviet WWII-era Marshal Rodion Malinovsky, has carefully preserved her father's archive of battlefield reports, diaries, and secret papers, handing some of them over to the Russian Historical Society this week. Speaking to Natalya, a Rossiya Segodnya journalist discovered which papers she holds most valuable.

The documents from Malinovsky's personal archive have been uploaded to the Russian Historical Society's website, and include translations of German documents, reports on the operation to liberate western Ukraine, Malinovsky's communique to the commander of the Kwangtung Army, and more.

Malinovsky spent much of his adult life in combat, RIA Novosti military affairs contributor Andrei Kotz recalled. At the start of the First World War, the young Ukrainian Odessa native joined the Imperial Army at the age of only 15, convincing his superiors to enlist him as a volunteer despite his age. After two years on the Russian Front, he was sent to France to fight in the Russian Expeditionary Corps, where he was seriously wounded. Returning to Odessa in 1919, he joined the Red Army, fighting White Admiral Kolchak in Siberia. In 1937, at the rank of colonel, he volunteered for his third war, heading off to fight the fascist forces of General Francisco Franco and his Italian and German allies in the Spanish Civil War.

Russian Defence Ministry
Russian MoD Declassifies Docs About Soviet Women's Feats During WWII
Meeting the Great Patriotic War (the Eastern Front of World War II) as a brigade commander, Malinovsky quickly moved up the ranks, and became commander of the troops of the Southern Front in December 1941 after the latter suffered a series of devastating defeats.

"In 1946, my father was asked by Ogonyok magazine what was his most memorable and happy day from the Great Patriotic War," Natalya Malinovskaya said, speaking to Kotz. "I think the draft of his response (the original did not survive) is one of the most valuable documents in the whole archive," she noted. "His answer was as follows: 'I would very much like to say the happiest day was May 9, 1945 (Victory Day), or April 10, 1944, when my native city of Odessa was freed. But the most memorable day of the whole war for me was that bitter day when we were forced to leave Rostov-on-Don. I thought about that city every hour, every minute, and can confidently say that the first truly happy day of the war for me was February 14, 1943, when we took Rostov-on-Don back from the enemy."

A significant portion of Marshal Malinovsky's papers consists of German documents translated by Soviet military intelligence. Compiling a special folder devoted to 'Knowledge of the Enemy', Malinovsky showed great interest in the views of German officers and ordinary soldiers, including regarding the Soviet Nikopol-Krivoy Rog offensive, which he directed together with General Fedor Tolbukhin. In the space of a month, troops of the 3rd and 4th Ukrainian Fronts defeated 12 German divisions, trapped the 17th Wehrmacht Army in Crimea and liberated the strategic industrial areas of Nikopol and Krivoy Rog.

© Sputnik /
'For the Motherland': Red Army on Soviet Posters
15
A report from Malinovsky's archive by the commander of the Wehrmacht's 16th motorized division dated January 20, 1944 reads: "At the moment, the division has been bled white…The fighting value of the division today consists only of its artillery and armored subunits. The infantry can no longer resist strong attacks."

Another document – this one an address by 30th Army Corps Commander Holidt to the commanders of the 26th tank and 16th motorized divisions dated March 4 in the battle's aftermath reads: "I demand a thorough investigation and punishment for the guilty commanders and their deputies by military tribunal. The measures taken must be reported to me immediately. Before March 7, the following materials must be provided: on how the enemy managed to drive a wedge through our defenses and forge a speedy breakthrough in the area of Zelenaya? What caused the disorderly retreat? Why, on the night of March 4, did the right flank of the 16th motorized division retreat in a disorderly fashion, contrary to the order of the corps? All guilty commanders are to be stripped of their posts."

And Malinovsky closely monitored the moods not only of commanders, but of ordinary soldiers as well. In his archive is a page from a diary of a serviceman captured near Budapest. Malinovsky underlined the following excerpt with a colored pencil: "The senior staff doctor…is looking to break down the walls and install six to eight new shower units. This at a time when Ivan is capable of quickly putting an end to this bathhouse idyll. For eight days the well-equipped, perfectly functioning establishment will not be able to operate due to rebuilding, and on the ninth day when everything is completed the Russians will come and everything will be blown sky-high."

© Photo :
Excerpt from a document addressed to Malinovsky.

Another document of special historical significance is an episode shedding new light on the Soviet-Japanese War of August 1945. In July of that year, Malinovsky took command of the Trans-Baikal Front, which would rapidly drive through the Gobi Desert into central Manchuria a month later in Operation August Storm. Achieving complete surprise, Soviet forces were able to encircle and completely destroy the million-strong Kwangtung Army in two weeks. Malinovsky was the first to call on the Japanese to surrender.

"The archive has two stunning documents relating to that campaign," Natalya Malinovskaya said. "The first is the hand-written letter by my father, written on an ordinary sheet of paper, ordering the Kwangtung army to surrender. It indicates the areas where Japanese soldiers were ordered to lay down their arms."

"The second could serve as a script for a Three Musketeers-style film," Malinovskaya quipped. "It's written on the same ordinary checkered notebook paper, featuring the report of Major Alexander Pritula. He and his paratroopers landed at Mukden airfield on August 19, 1945, took it under their control, and in the course of their inspection, rather unexpectedly stumbled upon Puyi, the Emperor of Manchukuo. The Soviet army had been searching for him for over a week, and he was already on a plane preparing to fly to Japan. He was captured at the last moment and put on a Soviet plane. Pritula hastily wrote a report to my father which read: 'During the inspection of the airfield, Emperor Puyi was found. I'm sending him to you under escort.' And a postscript adds: 'Please quickly send the commandant of the city of Mukden and replenish our ranks. There were very few paratroopers. Are we musketeers or what?"

Soviet People Had Fun, Too