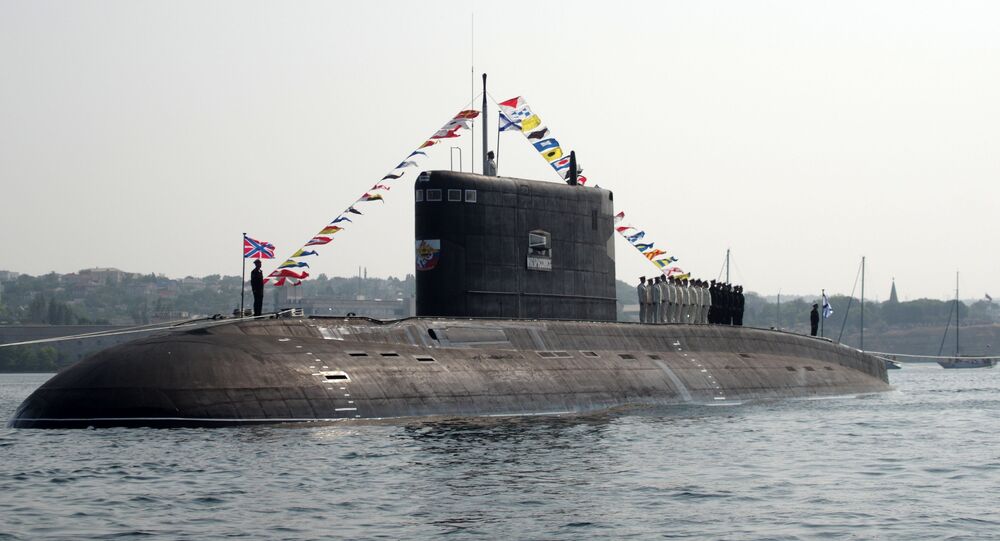 Project 636.3 Varshavyanka attack subs, nicknamed 'black holes' by the US Navy for their sonar-evading capability, have been in service with the Russian Navy for nearly four years now. Rossiya Segodnya journalist Andrei Stanavov got an exclusive first-hand look inside the Novorossiysk, Project 636.3's lead vessel. Sputnik invites you to come along.

The Russian Navy received six Project 636.3 subs, NATO designation "Improved Kilo," for the Black Sea Fleet between 2014 and 2016, with half-a-dozen more now on order for the Pacific Fleet.

© Sputnik / Ramil Sitdikov
Day of the Russian Submariner in Pictures
14
On the eve of Submariner's Day, a Russian Navy professional holiday celebrated on March 19, Stanavov got a chance to check out the Novorossiysk in the Black Sea port of Sevastopol.

Descending down the long, narrow shaft from the conning tower into the vessel's belly, the journalist admitted that for the uninitiated, going down the ladder is not easy, "especially when you're wearing your outer clothing and a hefty backpack with camera equipment. There's a tremendous risk of getting humiliatingly stuck. To prevent this, experienced submariners advise you to keep your stuff over your head."

© Sputnik / Andrei Stanavov
Descending down into the Novorossiysk.

Noting that it took him about two minutes to descend, the journalist stressed that in an emergency urgent dive situations, lookouts must leave the bridge in 20 seconds flat. The commander always descends last and closes the hatch. "It's impossible to hang around," Stanavov writes. "20 seconds more and the bridge is submerged."

The ladder leads directly to the sub's control room. Here, the sub's main systems are found, including its sonar complex and navigation system, radio-electronic controls, and the boatswain's station.

© Sputnik / Andrei Stanavov
Crew member at the controls of the Novorossiysk's weapons systems.

"Here too are the vessel's 'eyes', in the form of a rotating optical periscope. Nearby, in a small recess, are the weapons controls. And the sub has plenty: The Novorossiysk's torpedo deck can be fitted with a whole arsenal of mines, torpedoes, and Kalibr-PL missiles capable of attacking both sea and ground targets. The sub's six forward torpedo tubes are 'omnivorous', constituting a universal launching complex."

The Rostov-on-Don, the second Project 636.3 sub to be commissioned, demonstrated the new attack sub class's capabilities in December 2015, when it became the first submarine in the Russian Navy to strike real ground targets, pounding terrorists in Syria using its Kalibrs. It was reportedly this performance that prompted the Navy to order six more improved Varshavyankas for the Pacific Fleet.

"Every ship has its own, special character," Novorossiysk commander Captain Second Rank Konstantin Tabachny explains. "We have six submarines in the unit, and trust me, when they go out to sea, commanders can feel the difference, even though they are part of one project. Even mooring is a unique procedure for each vessel."

Inside the sub one finds a multitude of multi-colored hand wheels and valve actuators; most of them are there for emergencies and rarely used, with most systems controlled either from central control panels or are fully automated.

© Sputnik / Andrei Stanavov
An officer aboard the Novorossiysk looking through the periscope.

"In the diesel engine compartment, one is met with a deafening roar and the smell of warm engine oil," Stanavov wrote. "Talking is impossible here; one has to shout. It's no surprise; the small enclosed space contains two diesel generators with a capacity of 1,500 kilowatts each. The main propulsion motor produces 5,500 horsepower. Behind the engine room is the electric compartment, lined with switchboards with indicators and toggle switches."

Captain Tabachny is an ardent supporter of diesel-electric subs, even though he respects his "nuclear" cousins. "Nuclear subs are the vessels of the future. There, everything is white; the crew walks around clean. We don't have that. I believe that every submariner should serve on a diesel sub. Until he can feel for himself its tight spaces, until he smells the diesel fuel, he cannot call himself a real submariner. Otherwise, Project 636.3 is very successful. We have exactly the same weapons the multi-purpose nuclear-powered subs do," the officer stressed.

And diesel-electric subs have several advantages over their nuclear counterparts as well, being more compact, which allows them to operate in shallow water, approach close to shore, transport diver saboteurs, lie down on the sea floor, and lay mines in narrow channels. Modern life-support systems allow them to remain submerged for up to five days, and to remain at sea for up to a month and a half.

The Novorossiysk is a sort of "world record holder" for silent propulsion, according to his captain. His sub is regularly followed by an "honorary escort" of NATO corvettes and frigates, but as soon as it dives and performs a deviation maneuver, the NATO ships fall off like so many barnacles. During one mission in the Mediterranean, a US destroyer searched for the Novorossiysk in vain for three days straight, before the sub surfaced nearby.

"There is a belief that during this kind of 'hide and seek', one cannot speak loudly, but that's not the case," Stanavov emphasized. "Conversations from inside the thick-walled rubberized hull can't be picked up even by the adversary's most sensitive sonar systems. The noise from numerous onboard systems can be heard, however; therefore, the crew turns them off, leaving only the essential systems."

Living quarters aboard the Novorossiysk are compact, with cabin meeting rooms comparable in size to the interior of an SUV. Here, officers hold meetings, eat meals, etc. One bulkhead is decorated with a large picture of St. Petersburg's Peter and Paul Fortress, signed by Defense Minister Sergei Shoigu. Another wall features a plaque with the names of the sub's first crew, a folded, framed St. Andrew's Flag, and an Orthodox icon. Sleeping quarters are reminiscent of those inside a rail car, except shorter and narrower. This is where off-duty sailors spend the majority of their time, so as not to trip up others in the corridors.

According to Captain Tabachny, on submarines everyone understands their heightened responsibilities. Iron subordination to command, mutual respect and readiness to help one's comrades are the three pillars holding things together. Those who do not understand this do not last on the sub for long.

"Every sailor knows that I am the commander and that my actions are not up for discussion," Tabachny said. "A sailor should not even think about why this or that order has to be carried out. If I say turn the valve, it must be turned. Democracy has no place on a submarine. Still, we manage to maintain humane and friendly relations. We do not have separate gangways and galleys. Everything is shared, like in a big family."

© Photo : Russian Defense Ministry
What a Day for Navies: US Commissions 1 Nuclear Sub, Russia 3
29-year-old Petty Officer I Class Nikolai Sonin came to the Novorossiysk from the marines and has no regrets. "On the ship, I'm responsible for the torpedoes. The food here is exotic; there's more work, less physical preparation. I don't even notice the confined spaces; I just don't have the time," he admitted.

The vessel has two cooks, and the menu is indeed exotic, including 50 grams of red wine and red caviar daily while at sea.

Tabachny admits that while he isn't really superstitious, he does prefer to go to sea in an old wool sweater of his. Furthermore, he doesn't like going out to sea on Mondays. The latter is easy to explain and comes down to the fact that sailors are less focused following the weekend.

"Soon, the Novorossiysk will cast away its mooring lines and quietly depart for another mission. Despite difficult work conditions, submariners are cheerful people who sincerely love their work. Jokes and smiles on faces here shouldn't be perceived as something trivial. Any experienced sailor knows that being in a sub without a portion of good humor is like being without a breath of air – one cannot live without it," Stanavov concluded.

Day of the Russian Submariner in Pictures

What a Day for Navies: US Commissions 1 Nuclear Sub, Russia 3