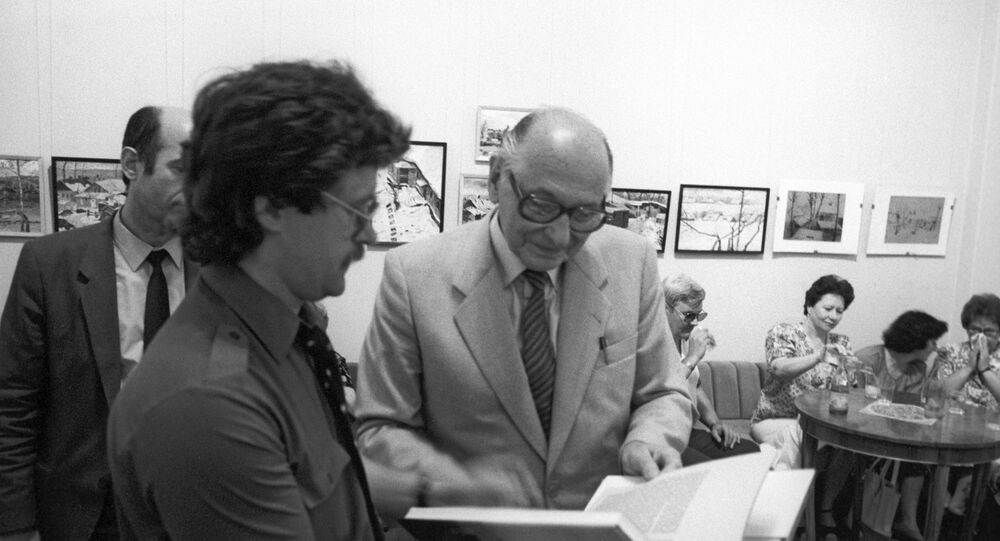 Heinz Felfe, an outstanding Soviet intelligence agent, who during the Cold War made an invaluable contribution to unraveling the West's plans for the USSR and ultimately to preserving peace, would be a hundred years on Sunday.

According to historians of intelligence services, the name of Felfe is on a par with legendary members of the British "Cambridge Five" led by Kim Philby as well as the Soviet intelligence agents who helped extract information about the US Manhattan Project.

Heinz Felfe was born in Dresden in 1918 into the family of a police officer. With the outbreak of WWII in September 1939, he took part in military operations against Poland.

© AP Photo
Legendary Soviet Spy George Blake Calls on Russian Agents to 'Fight World's Evil'
But he did not have to fight long as he fell ill with pneumonia and was demobilized. In 1941, Felfe received secondary education and joined the security police of the Main Directorate of Imperial Security (RSHA). He was subsequently sent to study law at the University of Berlin.

In August 1943, Felfe was transferred to the Sixth Directorate of the RSHA, engaged in external intelligence and led by Walter Schellenberg.

After a while, Felfe was promoted to the head the RSHA’a Switzerland department. In May 1945, he was taken prisoner by the British, but was released in the autumn of 1946. At this time, his political views began to change.

He realized that Soviet foreign policy was aimed at making sure that Germany remained a single and neutral state. The idea did not sit well with the West, which advocated the creation of a pro-American zone of occupation and the partition of Germany.

This wasn’t lost on Felfe, of course, and impacted his views regarding the West and the Soviet Union,” Vitaly Korotkov, a veteran of Russian foreign intelligence service, who at one time maintained contact with Felfe, told RIA Novosti.

But the key motive that shifted Heinz Felfe’s views in favor of cooperation with Moscow was the sight of the ruins of his native Dresden, after the barbarous British and US bombings of the city in February 1945, brutal and absolutely senseless from a military standpoint. According to various estimates, tens of thousands of Dresden's residents were killed. Felfe’s first contact of with Soviet intelligence happened in the early 1950s.

"During this time, Heinz met one of his colleagues in the Sixth Department of the RSHA, Hans Clemens, who already cooperated with our intelligence, and Clemens began to gauge Felfe’s attitude towards the Soviet Union with an eye to possible cooperation with us," Korotkov said.

The information obtained about Felfe convinced Soviet intelligence that he was a viable candidate for recruitment.

"When they met again, Clemens told Felfe that he would put him in touch with his Soviet comrades. In 1951 Heinz came to Berlin where he had a talk with representatives of our intelligence service and he agreed to cooperate," Korotkov continued.

A Man of Action

Felfe was instructed to find hind himself a job with the "Gehlen Organization” — the largest intelligence organization of post-war West Germany,created by the Americans and headed by Reinhard Gehlen, who directed operational intelligence at the Soviet-German front during the war.

"Heinz initially managed to get a job at one of the Gehlen Organization’s units and was subsequently transferred to their headquarters in the Munich suburb of Pullach," Korotkov noted.

In 1953, information obtained by Heinz Felfe helped the Soviet Union foil a Western plot to stage a coup in East Berlin.

In 1956, the Gehlen Organization was renamed the Federal Intelligence Service (BND), and Felfe was put at the helm one of its departments, engaged in work pertaining to the USSR.

For example, in 1953, thanks to the information received from Felfe, the USSR managed to react quickly to the West-organized coup attempt in East Berlin.

© Photo : NSA (file photo)
Slow Thaw: Cold War-Era Soviet Spy Freed After Three Decades in US Prison
During his years as a Soviet intelligence agent Heinz Felfe handed more than 15,000 classified documents and information about more than a hundred CIA moles over to Moscow.

Seeing many of its operations against the Soviet Union falling flat, the BND started getting suspicious eventually closing in on Felfe.

In November 1961 Heinz Felfe was arrested and sentenced to 14 years behind bars.

"He spent six years in prison, and all that time Soviet intelligence sought his exchange. West German politicians eventually decided that an exchange would be the best way to go and would help the BND and the Americans get back their agents arrested in the USSR and East Germany,” Korotkov said.

In February 1969, Heinz Felfe was exchanged for 21 Western agents — literally a bus, in which they were handed over to the West German side. Felfe became a citizen of the GDR, made his home in East Berlin and started teaching criminology at the University of Berlin.

In his memoirs, Felfe wrote that he felt proud that he had helped expose the war mongers.

"The hard years I spent working as a Soviet agent were the best years of my life," he noted.

For his outstanding contribution to strengthening the security of the Soviet Union, and his longtime and fruitful cooperation with Soviet intelligence, Heinz Felfe was awarded the Order of the Red Banner and Red Star as well as the badge of "Honorary Officer of the Committee for State Security" bestowed on him by the heads of the Soviet KGB.