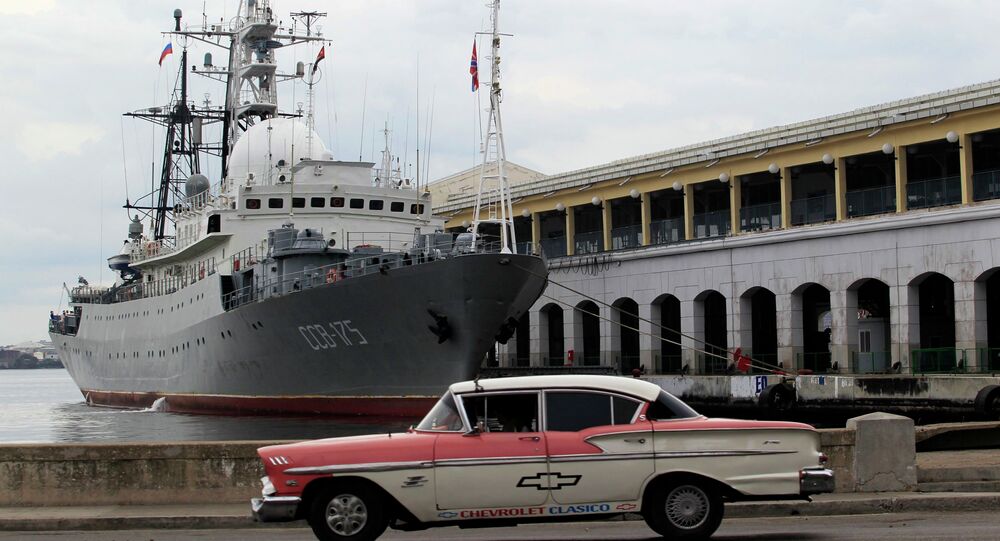 Once more, a Russian intelligence ship is conducting operations just off the coast of the southeastern United States. The SSV-175 Viktor Leonov remains in international waters, but is only a few dozen miles away from a major US ballistic missile submarine base in Georgia.

The US Navy reported Friday that they were monitoring the Viktor Leonov's activities near Naval Submarine Base Kings Bay, home to six of the US Navy's 14 Ohio-class ballistic missile submarines. The other eight are based on the Pacific coast at Naval Base Kitsap in Washington state.

Kings Bay is also home to the Strategic Weapons Facility Atlantic, where the UGM-133 Trident II ballistic missiles that the subs are equipped with are assembled and maintained.

"We are tracking the Viktor Leonov's presence off the East Coast, much like we are aware of all vessels approaching the United States," said US Navy spokesperson Cmdr. Bill Speaks in a statement. "We respect the right and freedoms of all nations to operate in international waters in accordance with international law."

As always, US boats and planes shadowed the Viktor Leonov as it made its pass. Naval observers have been watching the ship since it left the Port of Spain in Trinidad and Tobago in January.

Steffan Watkins, a Canadian security analyst, told the Washington Free Beacon that the ship was probably mapping the seafloor around Kings Bay to deduce the paths that American submarines entering or leaving the base would take.

"The most obvious purpose of the ship being off the coast is collecting signals intelligence," Watkins said in an email to the outlet. "The ship is outfitted with more than antennas above the water line. Viktor Leonov is reported to have magnetic anomaly sensors, acoustic gear to profile American vessels and have the capability to map the ocean's floor."

"It could be looking for uncharted cables that might be connected to previously unknown sensors or DoD communications cables that reach across the ocean," Watkins added.

This is the third pass the Viktor Leonov has come close to US shores since 2017. The electronic surveillance ship, part of Russia's Northern Fleet, has repeatedly passed the American East Coast since 2014.

Its February 2017 visit proved particularly controversial when it came within 20 miles of Kings Bay. The incident was even mentioned by US President Donald Trump, albeit with sarcasm.

"Hey, the greatest thing I could do is shoot that ship that's 30 miles offshore right out of the water," Trump said days after the incident. "Everyone in this country is going to say, 'Oh, it's so great.' That's not great. That's not great. I would love to be able to get along with Russia."

Last month, the Viktor Leonov returned, coming within 27 miles of the Virginia coastline but remaining in international waters. At the time, the ship was traveling north.

Tensions are high (aren't they always?) between Washington and Moscow. During his March 1 annual address to the Russian Federal Assembly, Russian President Vladimir Putin premiered a short video of Russia's new nuclear Sarmat ballistic missile striking a landmass that many remarked looked quite similar to the US state of Florida.

"I think it certainly looks like [Florida]," said US State Department spokesperson Heather Nauert about the video. "I'd ask you to go back and take a look at that. It's pretty clear what their target is."

Russia, US Should Deal With Complaints Before Discussing START III - Lawmaker