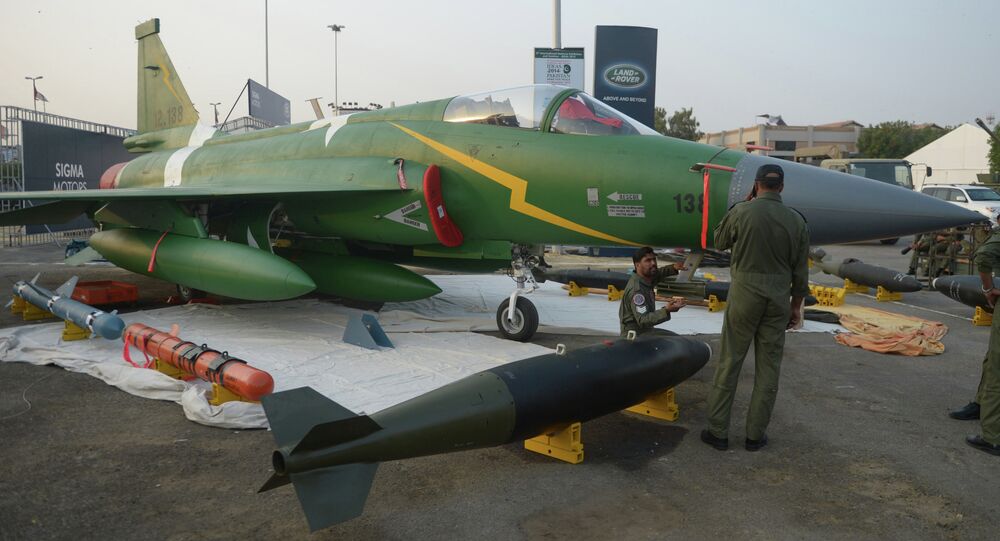 The Pakistan Air Force (PAF) has fielded a squadron of new Pakistan Aeronautical Complex JF-17 “Thunder” combat aircraft, according to a recent report by the Associated Press of Pakistan. The multi-role fighter jets are stationed at Pakistan’s Samungli Base near Quetta, the provincial capital of Balochistan.

Speaking at the February 28 inauguration ceremony of the planes, which form the Number 28 Multirole Squadron, Sohail Aman, chief of staff for the PAF, said "We totally understand the kind of conspiracies the enemies of Pakistan continue to hatch, but our resolve is very firm and response very clear," according to a PAF news release.

The multirole aircraft taking off from the Samungli Base is capable of reconnaissance, ground attack and aerial interception missions.

The squadron is tasked with the "responsibility of providing day and night aerial defence of the country, especially along the western borders of Pakistan," the defense official noted. Earlier this year, Islamabad accused US forces of conducting unmanned aerial vehicle attacks on refugee camps in Pakistan's western Kurram region, Sputnik reported. The US Embassy in Pakistan called the charge false.

Pakistan is a "peace-loving nation, but we do not want anybody to interfere into our airspace and territory," the air chief said.

"We have done whatever is humanly possible on fighting the menace of terrorism," Aman said, adding, "Allah has rewarded our efforts by restoring peace in the country.

Last December, Aman "ordered PAF to shoot down drones, including those of the US, if they enter our airspace, violating the country's sovereignty and territorial integrity." It appears Islamabad is giving the policy some teeth.

© AP Photo / Kirsty Wigglesworth
Pakistan Will Shoot Down Drones In Its Airspace, Even US Ones - Air Force Chief

The JF-17 has been developed by the Pakistan Aeronautical Complex and Chengdu Aircraft Corporation of China. The Chinese version is known by the moniker Xiaolong or "Fierce Dragon," but the export version used by Pakistan has been dubbed the "Thunder." While Islamabad is the primary operator of JF-17 jets, Nigeria has incrementally inducted JF-17s to support "counter-air, counter-surface, air ops for strategic effect and air support operations," according to the country's budget documents for 2018.