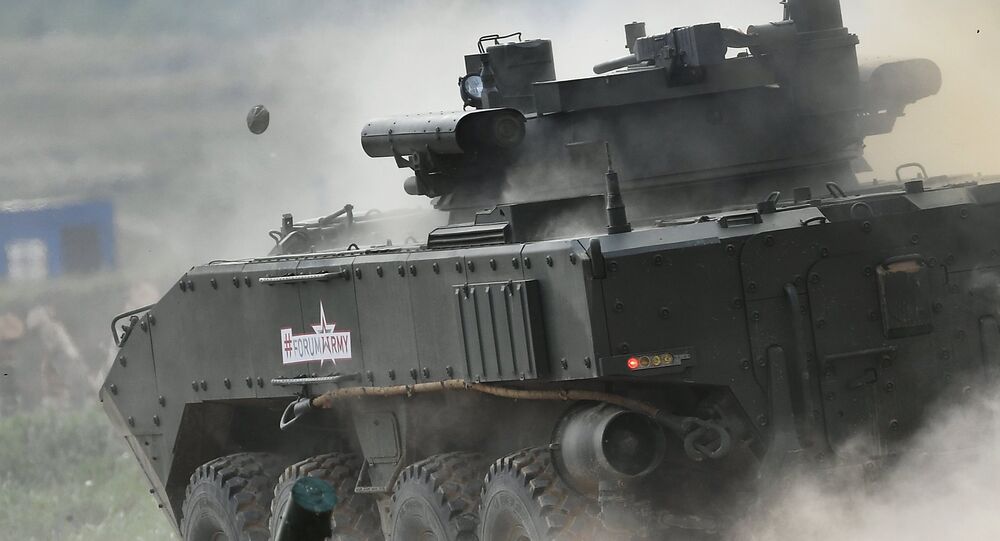 A senior official from Military Industrial Company (VPK), builders of armored vehicles including the new Bumerang armored personnel carrier, has promised to reveal more details about the company's latest development in the near future.

VPK director Alexander Krasovitskiy has confirmed that the new wheeled tank will take full advantage of the company's armor-building know-how, and feature a heavy gun.

"We will be able to talk more about this in the near future," Krasovitskiy said, speaking to Zvezda, the official TV channel of the Russian Defense Ministry.

In its APC configuration, the Bumerang's armament is known to include the Kornet anti-tank missile system, a 30-mm 2A42 automatic cannon, and a 7.62 mm coaxial machine gun.

Commenting on VPK's new 'wheeled tank' development, Viktor Murakhovsky, editor-in-chief of Russian defense magazine Arsenal of the Fatherland, said that the new armored vehicle will likely be equipped with a 125mm smoothbore gun – the same as that used on the Sprut-SDM self-propelled tank destroyer. This, in Murakhovsky's view, would give Russia a "wheeled tank which has no equivalent in the world."

For his part, Sergei Suvorov, an expert on Russian armor, pointed out that VPK's new wheeled tank would provide a decisive advantage on the battlefield.

"First of all, it would be quite a mobile tank, capable of moving at high speed along public roads without damaging them," Suvorov explained. "If we're talking about the kinds of conditions found in local conflicts and various counterterrorist operations, such a machine has every right to exist, being mobile, ready for rapid transfer from one location to another, and carrying out the mission required of it – namely, to provide powerful fire support," he added.

The Bumerang APC, an 8x8 armored vehicle first revealed to the public at the 2015 Victory Day Parade in Moscow, will start deliveries into the Russian army in 2019.