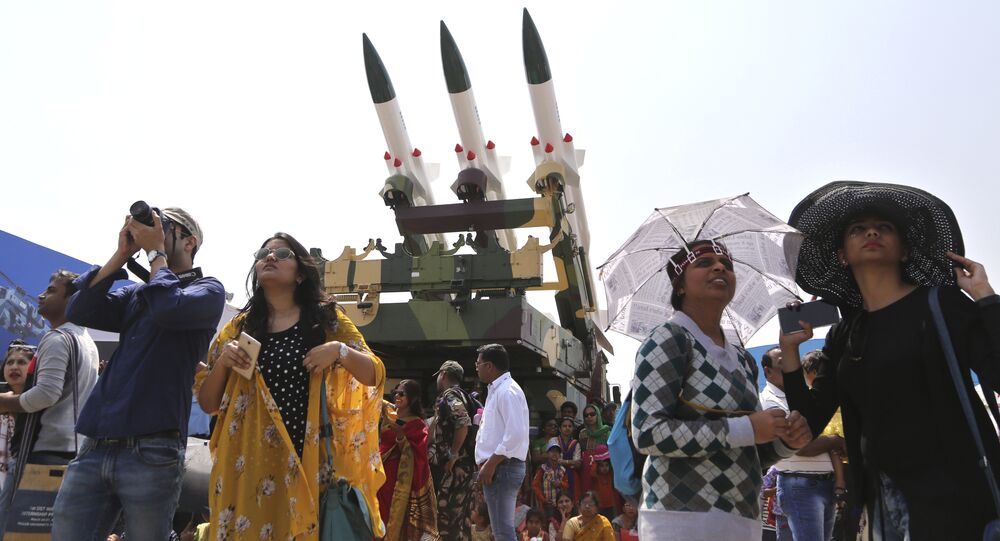 TheAkash, India's surface to air missile system, has 96 percent indigenous component, a range of 25 km, can simultaneously engage multiple targets in all weather conditions, and has a large operational envelope, from a low altitude of 30 meters to a maximum of up to 20 km.

New Delhi (Sputnik) — The Indian defense ministry has said that by introducing the Akash surface to air missile (SRSAM) system, developed by the state-owned Defense Research & Development Organization (DRDO), the country has saved billions of dollars and hopes to save more as many orders from the army and the air force are in the pipeline.

"As a result of successful development, the production and induction of the Akash missile system, at Rs. 345 bln ($5.3 bln), may be saved by existing production orders and many orders are in pipeline from the army and IAF," Nirmala Sitharaman, India's Minister of Defense, said in the nation's parliament on Monday.

Last year, the Indian defense ministry scrapped a global tender for additional SRSAMs and approved the procurement of an improved version of Akash, with a domestically-produced sensor. Earlier, the Indian Army and Air Force were not much interested in the earlier version of the missile system, and wanted to have a system which would have a sensor to track and target incoming missiles accurately. DRDO has claimed that the advanced Akash system has done away with the shortcomings.

"Further, production orders are to be placed by the Indian Air Force and the Indian Army for the Akash missile system," Nirmala Sitharaman added.

"A project for another ATGM has also been taken up," Sitharaman announced.

On March 1, DRDO had announced that the development trial of NAG was completed.

"NAG ATGM has been developed by DRDO and today's flight tests have once again proved its capability. With this, the developmental trials of the missile have been completed and it is now ready for induction," India's defense ministry said in a statement on March 1.

The DRDO has been working on the NAG since 2009, spending approximately $47 million on its development. With a combat weight of 14.8 metric tons, NAG is a little bit heavier than the current crop of Indian Army ATGMs but it defies this shortcoming with its carrier, the NAMICA.

"Regarding ‘NAG' & ‘NAMICA' initial activities related to Production/Transfer of Technology (ToT) documentation & private/public production partners have been initiated. Since NAG technology is locally-made and production will be carried out at Indian Production Agencies, no ToT / Technology Acquisition/huge import is involved. Therefore, there will be a huge saving of foreign reserves," a delighted Sitharaman said on Monday.

Earlier on March 3, Nirmala Sitharaman had made it clear that her ministry will provide a decisive push to the homegrown light combat aircraft Tejas for the Indian Air Force. "Tejas will be part of the Air Force. We are making provisions for the Tejas Mark 2. They will be part of the Air Force's single-engine fighter jet requirement," Sitharaman said at a select media briefing, adding that the government will throw its entire weight into developing variants of the Light Combat Aircraft (LCA) Tejas.

This is being considered a major setback by global manufacturers like Lockheed Martin and Saab, which have been aggressively trying to market their aircraft F-16 and Gripen-E,  respectively, for last two years.

"There is a sense of urgency (to ramp up Tejas' production), more so because we have to sell it to countries," Sitharaman had said on March 3.