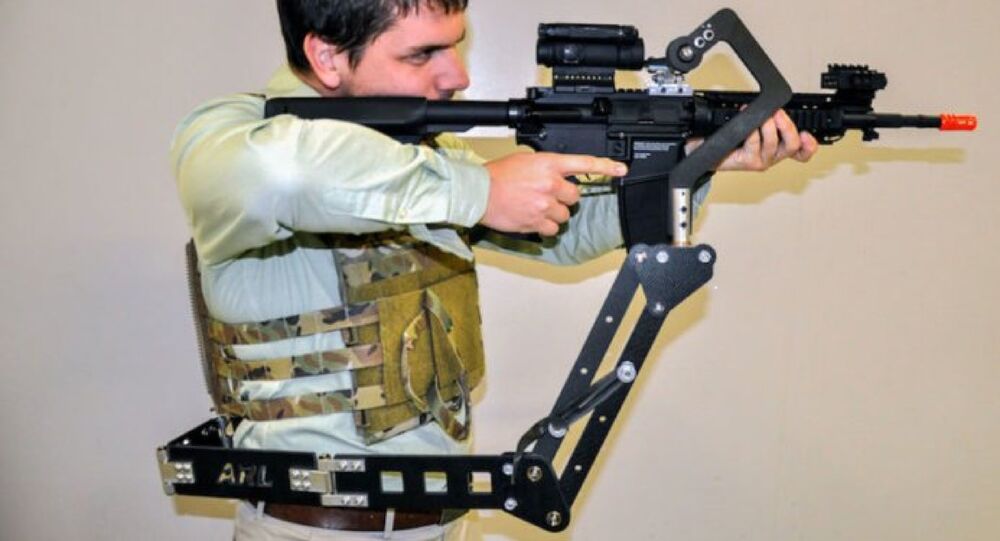 Game Over, Man: US Army Developing Mechanical Arm Straight Out of Aliens

The US military has unveiled the second prototype of a high-concept sci-fi piece of equipment: a mechanical limb that can carry a rifle or shield and is pretty much exactly identical to the M56 Smart-gun from the 1986 film “Aliens.”

The script to Aliens describes the smart-gun as a "sort of steadicam that kills," which is frighteningly accurate. The Army's Third Arm device tracks the back hip and wraps around the waist before the metal arm travels up to hold at sternum level. The Army Research Lab (ARL) recently conducted a test of the prototype with six soldiers and reports were rosy.

The Third Arm is constructed from a carbon fiber, accounting for its light weight of only 3.5 pounds. However, the Third Arm is strong enough to carry the 27-pound M249 light machine gun commonly used in the US Army and Marine Corps or a 20-pound defensive shield that would be perfect to deflect incoming projectiles or facehuggers. It could also be used to help soldiers carry heavy loads.

​The arm is still in its prototype phase, so those gearing up for combat drops to LV-426 will have to wait for a few more years. The Third Arm is scheduled for another test sometime in the spring, this time with 15 soldiers.

"Right now we have a prototype that's essentially a research platform that we're using to investigate different types of materials — how materials and structures can stabilize a weapon or a shield, reduce fatigue on the soldier's arms, but also improve accuracy," said ARL mechanical engineer Dan Baechle in a statement on Wednesday.

Development of the Third Arm began in 2015 and the first prototype was constructed in 2016. For the second prototype, the ARL team developed a single plate that can be adjusted to fit different body types.

ARL hope that the Third Arm could improve soldier performance, particularly as the kits soldiers carry grow more complex. A combat-loaded US Marine in the Middle East carries at least 70 pounds of gear, including body armor, their rifle and pistol and ammunition for both, fragmentation and smoke grenades, radios, an IED detector, a 100-ounce water bottle and other implements such as heavier rifles, grenade launchers, tripods, medical kits, etc.

It could also help with aiming. When one's arm is fully extended to fire a rifle at oncoming xenomorphs, the muscles begin to shake, lowering accuracy. The Third Arm transfers the weight of the weapon to the torso, allowing for greater stability and thus improved accuracy — in theory.

The ARL did not comment on whether they were also developing phased plasma pulse rifles, P-5000 work loaders, or treacherous British androids.