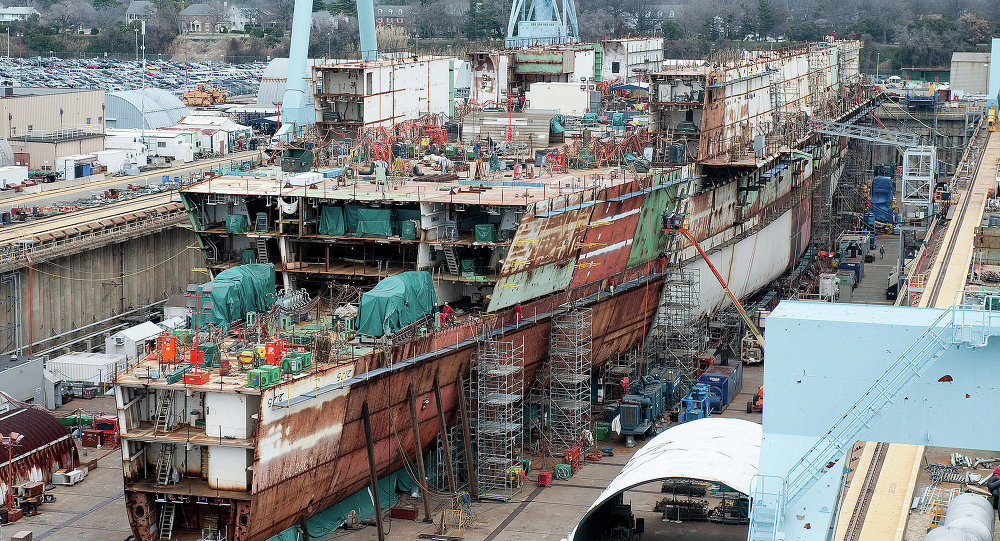 The most recent project milestone came in the form of dropping in an 888-ton section between the bow and midship of the future USS John F. Kennedy, the company said.

"We are pleased with how construction on the Kennedy is progressing," said Mike Butler, a program manager at HII.

The namesake Ford-class aircraft carrier, the USS Gerald Ford, was nothing short of a spending nightmare. The ship took 12 years to build, was completed at least 15 months behind schedule and came in at a price of about $13 billion, some 20 percent over budget.

Some analysts are skeptical about the USS Ford's and Kennedy's ability to fight wars in ways that actually matter.

"They are trying to relive their glory days in World War II when it was the US against Japan, carrier versus carrier, the Battle of Midway," analyst Roger Thompson told Sputnik last March, adding that it was odd for America to operate so many carriers given the advances in submarines and anti-ship missile technology.

What's more, Thompson said, "I am not exaggerating when I say that half the systems on them don't work." Thompson, a lecturer at Kyung Hee University in South Korea, is the author of a book titled, "Brown Shoes, Black Shoes, and Felt Slippers: Parochialism and the Evolution of the Post-War Navy," which the late US Navy Admiral Elmo Zumwalt called "essential reading."