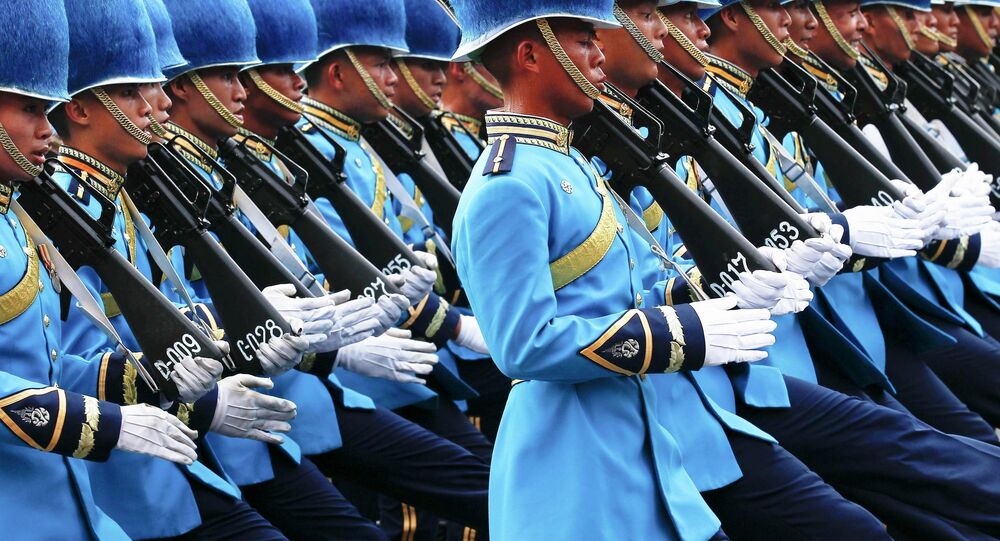 The US has nearly doubled its troop commitment to Thailand’s annual Cobra Gold multilateral military exercises from last year. Relations between Bangkok and Washington have improved since US President Donald Trump took office, but the exercises are complicated by the presence of Myanmarese observers.

Some 6,800 US soldiers will participate in the exercises, which will involve over 11,000 personnel from 29 different countries. Other major participants include Japan, Indonesia, Malaysia, Singapore, South Korea and, of course, Thailand. The drills will last from Tuesday until the 23rd.

"This exercise is the largest multilateral exercise in the Indo-Pacific region. It speaks to the commitment of the US in the region," Steve Castonguay, a spokesman for the US Embassy in Bangkok, told Reuters.

"The number of troops is up this cycle and has nothing to do with the politics at all. Some years, the US had other operations to conduct such as in the Middle East, so participation in past years was reduced," added Gen. Tanchaiyan Srisuwan, supreme commander of the Royal Thai Armed Forces, during the opening ceremony. "The same as our side: it depends on budget and planning."

In 2014, Thailand was the site of a coup d'etat, when commander of the Royal Thai Army Gen. Prayut Chan-ocha overthrew the democratically elected government aligned with former Prime Minister Thaksin Shinawatra, a divisive figure with enormous popularity in poorer areas but significant opposition due to allegations of corruption.

Prayut overthrew PM Yingluck Shinawatra (Thaksin's sister) and named himself her replacement. The military junta has since enacted significant restrictions on freedom of speech and expression in Thailand.

Thailand was the first Asian country with which the US established diplomatic relations, with the first exchange of envoys occurring in 1818. Relations were warm throughout the Cold War, but after the 2014 coup Washington condemned Chan-ocha and reduced military support. In 2013, 9,000 US troops were sent to Cobra Gold, but only 3,600 in 2014.

However, relations have begun to warm once more under Trump, who is seeking to bolster alliances in the region to check the power of China.

Chan-ocha promised to hold elections and put an end to the junta in November of 2018, but in January Bangkok walked back that claim to February of 2019.

"The truth is, Myanmar is not a participant nation," US Ambassador to Thailand Glyn T. Davies told reporters at the opening ceremony. "They're not part of the exercises here." Myanmar's flag was correspondingly absent from the opening ceremonies, when the flags of the participating nations were flown.

Earlier in February, the Pentagon reported that Thailand had invited Myanmarese observers for the portion of the exercises dealing with natural disaster relief efforts.

Nevertheless, their presence was criticized. Sen. John McCain (R-AZ), who chairs the Senate Armed Services Committee, told The Associated Press that "militaries engaged in ethnic cleansing should not be honing their skills alongside US troops."